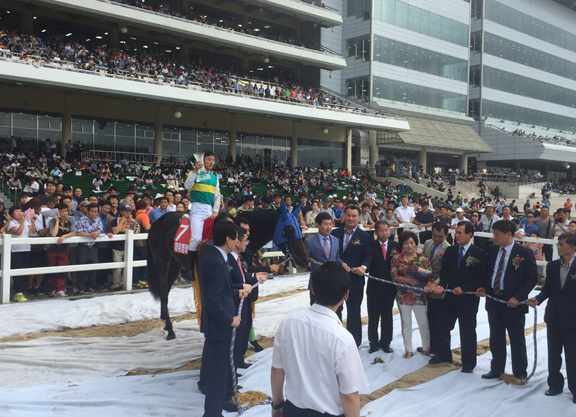 Power Blade (Kor) (Menifee) became the first horse in the relatively tender history of the Korean Racing Association to sweep the nation's Triple Crown, completing the task with a seven-length demolition of Sunday's M₩500 million (£333k/€398k/US$438k) Minister's Cup over 2000 metres at Seoul Racecourse.

Sent off the 3-10 chalk to follow up on facile victories in the KRA Mile Cup Apr. 3 and in the Korean Derby (1800m) May 15, Power Blade settled in fourth position early as his stablemate and Korean Oaks winner Ottug Ottugi (Kor) (Forest Camp) set the pace, as expected, as the chief market rival. Traveling well behind a line of three on the second turn, Power Blade was waited with as they entered the stretch, then shifted down to the rails and exploded through the final 300 metres to register a seven-length success (video). Just as in the Korean Derby, Zettabyte (Kor) (Menifee) was second best, just ahead of Baedari Bobae (Kor) (Colors Flying) in third. Ottug Ottugi dropped away to finish fourth. With the win, his sixth on the bounce, Power Blade now has seven wins and two seconds from nine appearances and earnings in excess of M₩1.36 billion (about US$1,198,222).

Menifee raced for the partnership of James Stone and Arthur Hancock and was trained by Elliott Walden, winning the GI Blue Grass S. and GI Haskell Invitational S. in 1999 after finishing runner-up to Charismatic (Summer Squall) in that year's GI Kentucky Derby and GI Preakness S. The son of Harlan began his stud career at Stone Farm before relocating to Korea, where he covered his first mares in 2007. Menifee, the leading first-crop sire in Korea in 2010, was second on the general sire list when his first crop was aged three in 2011 and has been atop the list in each of the four seasons since. He is well on his way to a fifth consecutive title, as he sits nearly M₩2 billion ahead of Forest Camp.