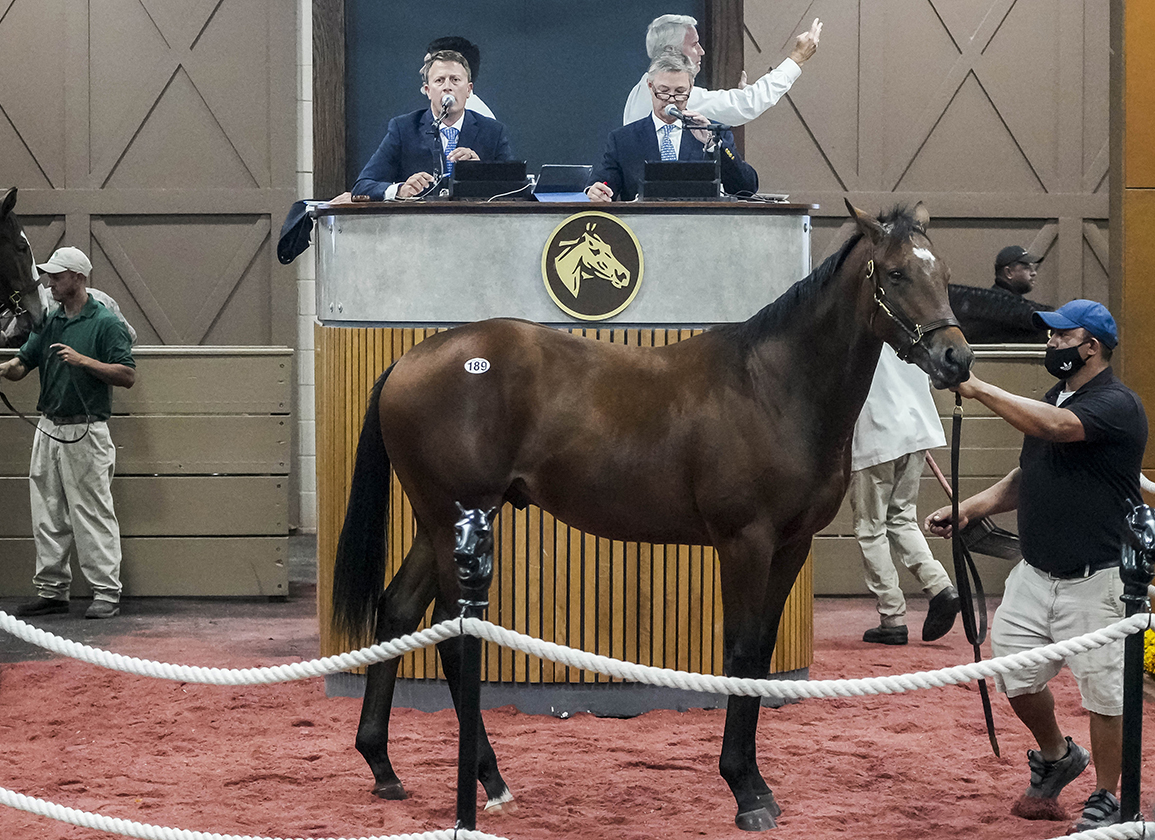 TIMONIUM, MD – Buyers had every right to expect competitive bidding during Monday's first session of the Fasig-Tipton Midlantic Fall Yearlings Sale–with normal Maryland shoppers joined by bidders shut out at previous sales–and the arena did not disappoint.

“[Monday's results] are really more impressive when you consider this was one of the sales that, when you compare 2020 to 2019, it really didn't have a COVID drop,” Browning said. “So '20 and '19 were very similiar in terms of statistical results for this sale. Some other sales have had a little bit of an anti-COVID bump throughout the United States this year in 2021 compared to 2020. Well, this is a pretty genuine increase in terms of statistical performance. Results in '19 and '20 were basically flat, so this increase in 2021 is even more impressive than it has been for some of the other sales.”

Eight yearlings sold for six figures Monday, up from just two a year ago.

A colt by Mendelssohn (hip 189) brought the day's top price when selling for $230,000 to Oracle Bloodstock. Also topping the $200,000 mark was a colt by Union Rags (hip 113) who sold for $220,000 to trainer Mac Robertson. Both were consigned by locally based sellers, with Dreamtime Stables offering hip 189 and consignor/breeder Dark Hollow offering hip 113.

“One of the nice things we saw today was the support of the local breeders,” Browning said. “It was nice to see the sale topped by Dreamtime, which is Mike Palmer and his wife and their longtime association with Candyland Farm's Herb and Ellen Moelis, who have been long-time supporters of this sale and this region. And the second highest-priced horse was from David Hayden and his Dark Hollow Farm. They were both really legitimate pedigrees with Mendelssohn and Union Rags. It is really rewarding to see regional breeders who have quality product support this marketplace, which helps lure more buyers and more successful buyers to the sale this year and in future years as well.”

The day's top-priced filly was also a daughter of Mendelssohn with Donato Lanni bidding $160,000 to acquire hip 159.

Cary Frommer, traditionally an active buyer at the Midlantic Fall sale, signed for three yearlings Monday, including a Twirling Candy colt (hip 78) for $115,000. But Frommer agreed it was tough sledding.

“I feel like I am paying more than I thought I would have to,” she said. “For a nice horse, it's still very strong and I've been outbid on a bunch of very nice horses. I think the market is fair, but it's just that it's a trickle down effect from the other sale. People haven't been able to buy what they wanted. So it's strong here.”

Pinhookers, some of whom are not traditional bidders at the auction, were a dominant presence at the sale Monday.

“I knew they were coming,” Frommer said of the pinhooking buying bench. “I knew everybody was having trouble at the previous sale. So I knew they would be here and I was not happy about it.”

One of those pinhookers making an unusual appearance in Timonium was Susan Montayne, who purchased a filly by Tiznow (hip 76) for $150,000.

“We've never actually done this sale before,” Montayne, who is a regular presence as a consignor at the Midlantic May 2-Year-Olds in Training Sale, said. “I have never come up here to buy horses. We usually focus on the Kentucky sales and sales at home in Ocala, but here we are. It was very hard to buy at Keeneland. Luckily, we have clients that send us horses to go to the races, but with the pinhook side, it was a little tough.”

The Midlantic sale continues Tuesday with bidding at the Maryland State Fairgrounds beginning at 10 a.m.

Conor Foley of Oracle Bloodstock struck late in Monday's first day of the Midlantic Fall Yearling Sale to secure a colt by Mendelssohn (hip 189) for a session-topping $230,000 on behalf of a partnership.

“He's going to go to [trainer] Ray Handal,” Foley said. “I bought him for a group of people.”

Of the yearling, Foley said, “He just looks a lot like Mendelssohn. He just looked like an athlete that should run next year; what surface he can run on, I don't know. I think horses like him were few and far between here and he really stood out.”

The colt was bred by Classic Thoroughbred XXIX and was consigned by Dreamtime Stables. He is out of Tasha's Moon (Malibu Moon) and is a half-brother to stakes-placed Juror Number Four (Into Mischief) and from the family of multiple graded winner Tasha's Miracle.

Hip 189 was one of two yearlings from the first crop of Grade I winner Mendelssohn to bring six figures Monday in Timonium. Earlier in the session, bloodstock agent Donato Lanni, bidding on behalf of Caroline and Greg Bentley, acquired the day's top-priced filly when going to $160,000 for a daughter of the Coolmore stallion (hip 159).

Trainer Mac Robertson, bidding on behalf of owner Joe Novogratz, purchased a colt by Union Rags for $220,000 Monday in Timonium. The bay colt was bred and consigned by Dark Hollow Farm and is out of Safe Journey (Flatter), who is also the dam of multiple stakes winners O Dionysus (Bodemeister) and Joy (Pure Prize). The yearling's second dam is Safe at the Plate (Double Zeus), a half-sister to champion sprinter Safely Kept.

“Safe Journey is an awful good mare for this sale,” Robertson said after signing the ticket on hip 113. “She has four or five really good horses that can win where we want to go. And I thought, for a Union Rags, he has enough length to be a really good horse.”

Several times a leading owner at Canterbury Park, Novogratz was a linebacker for the Pitt Panthers and was drafted by the Pittsburgh Steelers before being traded to the Minnesota Vikings. He is the founder of IDI Distributors Inc., an insulation distribution company.

Robertson trained the multiple stakes winner Amy's Challenge (Artie Schiller) for Novogratz. The mare, second in the GI Madison S. and third in the GI Humana Distaff S. in 2019, was purchased for $20,000 at the Fasig Midlantic Yearling sale in 2016.

Also on behalf of Novogratz Monday, Robertson purchased a filly by Malibu Moon (hip 158) for $95,000.

The competitive market was no surprise to Robertson.

“It's really strong,” he said with a rueful smile. “But I'm not surprised. I was at Keeneland–I've never seen an 80% clearance rate in my life. There are people who didn't get what they wanted at Keeneland, so of course they came here.

A filly by Tiznow (hip 76) is likely destined for a return to the sales ring next spring after selling for $150,000 to the bid of Ocala horsewoman Susan Montanye.

“She looks like a classy, two-turn filly,” Montanye, who signed for the pinhooking partnership in the name of her SBM Training and Sales, said of the yearling's appeal. “She is a little bit of a later foal, but she had all the right angles and parts. She vetted great for me. I watched her and I loved her walk, big overreach on her. What's not to like about her?”

Of the filly's final price, Montanye said, “Listen, if you want them right now, it looks like you're going to have to pay for them. She's a Tiznow filly and she's got some pedigree, so $150,000, I feel comfortable with that.”

The yearling was consigned by Sabrina Moore's GreenMount Farm and was bred by Moore in partnership with Tiznow Syndicate. She is out of Pinkprint (Not For Love), a half-sister to GI Breeders' Cup Dirt Mile winner and likely GI Breeders' Cup Classic favorite Knicks Go (Paynter).

Filly Adds Up for Newtownanner

Ron Blake liked a filly by Cloud Computing when he purchased her as a short yearling for $40,000 at the Keeneland January sale earlier this year and he still liked the bay yearling (hip 11) when he sent her through the sales ring in Timonium Monday. He  advised his clients, Samantha and Maurice Regan's Newtown Anner Stud, to purchase the bay for $145,000.

“We always loved her,” Blake said. “We bought her as a weanling and from the day we bought her I thought she was gorgeous. She's grown into a very pretty filly. She is a late foal and I think when you take that into account, you can see what she could become. She's by a first-year stallion and she was a late foal so she looked maybe a little small to some people. But because she is a May 20 foal, we thought she'd be a real beautiful filly. We advised our client to buy her.”

The yearling is out of Martini and is a three-quarter sister to stakes winner Dirty (Maclean's Music).

“I just think she has so much quality,” Blake said. “We think she'll be a good racehorse. She'll go back to the farm and be able to grow up a little bit. We will give her some time off before we break her and then go forward with her and see what she can do.”