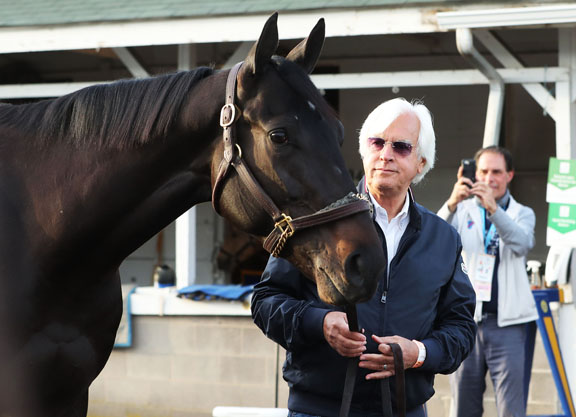 Zedan Racing's Medina Spirit (Protonico) exited his win in Saturday's GI Kentucky Derby in fine shape, according to trainer Bob Baffert, who said he would wait a week before committing the colt to the May 15 GI Preakness S.

“He came out of it well,” Baffert said Sunday morning. “It takes about a week to determine, so I'm going to come back next weekend and see. But I don't see anything discouraging right now.”

Baffert continued, “Can he win the Triple Crown? I don't know. But he's the Derby winner, and that's all that matters. I was coming in here, thinking, I wasn't sure [if Medina Spirit could win the Derby], everything had to go perfect for him. We were going to go to the lead, and see what happened. What if they challenged him? He made the lead pretty easily, for him, and the other speed horse didn't break [Rock Your World]. That's what it's like in the Derby. You have to get the trip; the other speed horse didn't get the trip.”

Of his record-breaking seventh victory in the Derby, Baffert said, “I stand here in front of you guys, and you don't know how much I appreciate winning this, especially as you get older. It gets tougher as you get older…I'd love to have 10 in there if I could, but you know that won't happen. To have one who has a chance. To win it with him, it's a Cinderella story, he's just a blue-collar horse, just digging in. He reminded me of Silver Charm….It's another Kentucky Derby dream that came true.”

Baffert could also be represented in the Preakness by GII Rebel S. winner Concert Tour (Street Sense), who worked five furlongs in 1:00.60 (5/17) at Churchill Downs Sunday.

“Concert Tour worked well this morning,” Baffert said. “I'll sit down and talk to [owner] Mr. [Gary] West. He wants that horse to develop and we're not rushing things. We know he's a good horse, so we'll see next week how he is. The thing is how they're training. They both would have to be training well.”

“It was a wild experience being in the Derby for the first time,” Cox said. “In every previous Derby I've attended, I've been a fan. I've seen the media interviews, the playing of 'My Old Kentucky Home' and everything leading up to the race. Being in the race, all of those things are sort of a blur. You're so focused on the job at hand. We were so grateful that both of our horses ran as well as they did. Essential Quality got a tough trip being so wide but coming that close to a Derby win makes me want more. We'll be back.”

Cox said both of his Derby runners, plus GI Arkansas Derby runner-up Caddo River (Hard Spun)–who missed Saturday's race due to an elevated temperature–are being considered for the Preakness.

“We'll watch both colts–kind of typical trainer talk,” Cox said.. “We'll get them back to the track in three or four days and see how they're moving. No commitments at all. I mean, I love the Preakness. It's a great weekend, probably one of the best weekends of the year and we'll definitely have horses for the undercard.”

“We're just so proud of his effort,” O'Neill said Sunday morning. “He ran a great race. He ate up last night and jogged fine this morning. It was all good.”

O'Neill added, “We'll look to run him next in the [June 5 GI] Belmont S.,” O'Neill said. “We'll get him back to California and start planning for that.”