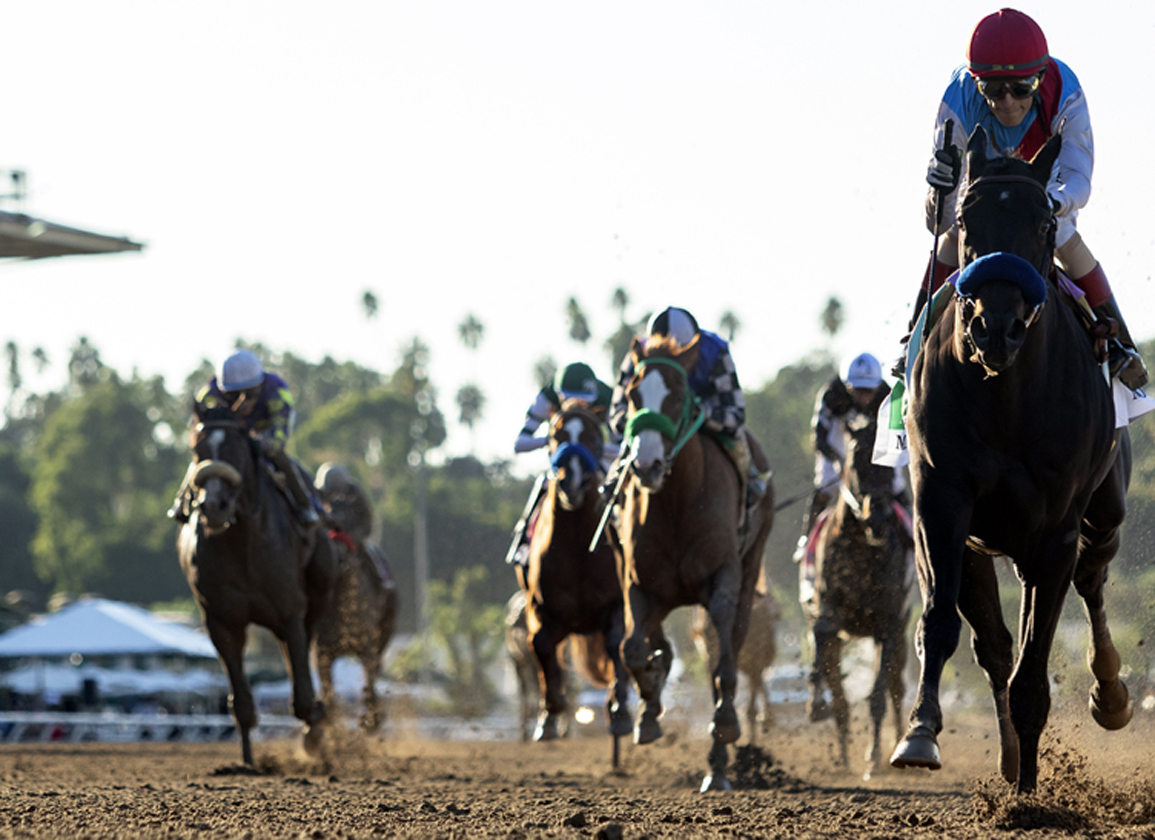 For 110 seconds on an unseasonably hot Saturday afternoon in Southern California, all was right in the world of Zedan Racing Stables' Medina Spirit (Protonico).

Having given last Saturday's GI Pennsylvania Derby a miss, the blue-collar colt was rerouted to Saturday's GI Awesome Again S. and a first try against some accomplished older horses. With a berth in the GI Breeders' Cup Classic on the line, the Florida-bred once again displayed the tenacity and raw ability that carried him past the post first in the GI Kentucky Derby, leading every step of the way to cement his status as one of the top choices when they enter the gate around 5:40 Pacific time on the afternoon of Nov. 6 at Del Mar.

As low as 3-5 in the wagering, Medina Spirit eased out to be off at 13-10 and his already-strong chances were amplified when the speedy Tizamagician (Tiznow)–a latest second to Tripoli (Kitten's Joy) in the GI TVG Pacific Classic–failed to break alertly from the inside gate, allowing John Velazquez an uncontested time of things atop Medina Spirit after edging to the front with a circuit of the Santa Anita main track to traverse. He had to do some work through the opening couple of furlongs in :23.34, but Medina Spirit came back nicely to Velazquez and went the next internal quarter-mile in a more manageable :24.38, with Tizamagician having gained ground to be second.

He was able to get some more air into his lungs with the next two furlongs timed in :24.02 and Medina Spirit traveled ears-pricked into the final three-eighths of a mile. Tizamagician and Tripoli, who was three and four wide the trip, tried to make a race of it in upper stretch, but Medina Spirit had plenty left and kicked home a decisive winner. Iowa Derby winner Stilleto Boy (Shackleford), third to Medina Spirit last time in the Aug. 29 Shared Belief S., ran a blinder to be second at 54-1, two lengths better than Express Train (Union Rags) in third.

“I'm happy for Zedan and what we have had to deal with,” said trainer Bob Baffert, winning the Awesome Again/Goodwood for a record-extending seventh time. “We stayed focused on the horses. The fans came out to see this horse and they are rooting for him. I could tell by the crowd noise. They are all pulling for him.  It's an emotional win for us. Johnny V. can do whatever with the horse. He can wait, stalk, whatever. This horse keeps getting better and better.”

Medina Spirit was the refuse-to-lose winner of the GIII Robert B. Lewis S. Jan. 30, an effort that was sandwiched between runner-up efforts to 'TDN Rising Star' Life Is Good (Into Mischief) in the GIII Sham S. and GII San Felipe S. before disappointing fractionally when second to Rock Your World (Candy Ride {Arg}) in the GI Santa Anita Derby Apr. 3. Those who kept the faith got odds of 12-1 for the GI Kentucky Derby, where his fighting qualities were on display yet again, clawing his way to a half-length defeat of 'Rising Star' Mandaloun (Hot Rod Charlie), with future Pennsylvania Derby hero Hot Rod Charlie (Oxbow) third and champion 'Rising Star' Essential Quality (Tapit) fourth. Allowed to participate conditionally in the May 15 GI Preakness S. in the immediate aftermath of the betamethasone positive that remains a cloud over the Derby five months later, Medina Spirit was no better than third behind Rombauer (Twirling Candy). After skipping the summer's major 3-year-old events, he was not among the original nominees to the Shared Belief, but was supplemented at entry time and reversed form with Rock Your World in that Aug. 29 event.

Medina Spirit is one of seven winners from two crops to race by the Giant's Causeway stallion Protonico, a four-time graded winner and twice placed at Grade I level, each time behind the Baffert-trained Hoppertunity (Any Given Saturday). He is the only foal to date for Mongolian Changa, who was covered this year by Giant's Causeway's son Not This Time. Medina Spirit's third dam Holy Niner was a half-sister to GISW High Yield (Storm Cat).