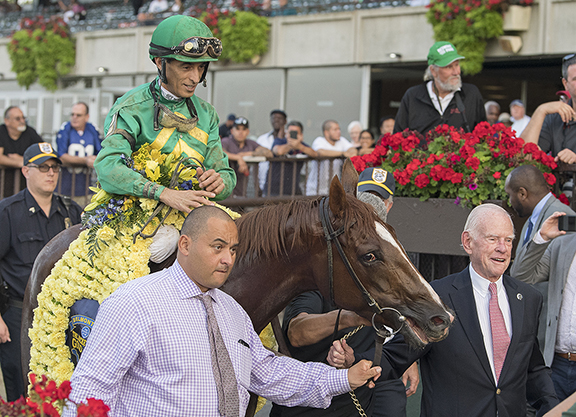 Twenty-five years is a long time to spend in a job. Especially one in the world of training Thoroughbreds, which necessitates frequent travel, untold hours of overtime, waking up before the sun and physically toiling away at the daily work of controlling and redirecting the energy of half-ton animals.

But when you get to spend that quarter-century under the tutelage of a Hall of Fame trainer, the time becomes an asset. And now, with a life’s worth of experience accrued working under Shug McGaughey, former assistant Robby Medina has made his move–to become the general manager at Guinness McFadden’s Blackwood Stables, a breaking, training and rehabilitation farm that can be found in stallion farm country, Versailles, Ky.

Medina, 46, is from a racing family. He grew up in Chicago, where both his mother and father made their living on the racetrack.

“I always would go with my father to the track on the weekends, and I fell in love with it instantly,” Medina said. “That’s all I ever wanted to do.”

After graduating high school, Medina started working full-time on the backstretch, like his parents. He had dreams of working in New York, though, and realized them when landing a job with Angel Penna, Jr. He worked with Penna for a year and a half, before finding his home, with McGaughey in 1995.

“When I first started with Shug, I was a groom, and I got to take care of a filly named Glitter Woman,” he said. “She won the [1997 GI] Ashland and was a really good horse.”

Medina became an assistant in 2000 and has spent the past 20 years rising to the position of top assistant trainer to a legendary horseman. During that time, McGaughey’s barn won the GI Kentucky Derby, GI Travers S., GI Whitney H. and GI Metropolitan H. among an assortment of other top-level wins. It’s tough to differentiate from amongst the stars and exhilarating highs, but Medina does have a few favorites.

“I should say my favorite memory is Orb winning the Derby, there’s no topping the Derby,” he said. “But if there’s such a thing as a 1A, as a kid I always remember watching the Met Mile. To me, after the Derby, that’s the race I always wanted to be part of. Honor Code won it, and he’s my favorite horse that I’ve ever been around. He and Point of Entry were the two best horses I was lucky enough to put my two hands on. They were unbelievable, and all you had to do was stay out of their way and keep them happy.”

Long obsessed with the racetrack, these days Medina is looking for more stability, for him and his girlfriend, and especially for his young daughter as she starts school. So he finds his way to Lexington, and Blackwood. The only job, aside from head trainer, that Medina said he considered.

“I’ve always liked Lexington a lot, I can remember the first time I came here was with my dad in 1983,” he said. “I got to thinking at some point I might train on my own, but I just couldn’t see myself leaving Shug to go work for someone else on the track. To me, that would be like leaving the 1927 Yankees. Any other step you make is a step down in my opinion. Guinness called me and we talked a few times through the winter and I liked what he said. It’s something totally different, even though it’ll still involve the training aspect. I thought about it, and asked my girlfriend and my daughter what they thought and they were on board, so I’m really excited.”

“He had 20-some-odd solid years here,” McGaughey said of Medina. “He was a great assistant and kind of ran the show with Payson Park in the winters. Obviously I’ll miss him, but sometimes it’s time to move on. He’s got a young child, and she needs a permanent place to start her life, instead of traveling all the time between Florida, Belmont, Saratoga, and he’s got that now. The door’s always open here, but I hope it all works out well for him.”

Naturally, the experience under McGaughey was a huge selling point for Medina, attracting McFadden to inquire. He soon realized the partnership would be a perfect fit for both Blackwood and Medina.

“Robby obviously has all the experience anyone could want in a farm trainer,” McFadden said. “Working with Shug for 25 years, you’ve pretty much seen all there is to see. He knows how horses should come prepared to the racetrack and he knows what he was looking for as a trainer himself. He came from an extremely respected program, and calling around and asking about him, all I got was good feedback. He had everything that I was looking for. I wanted racetrack experience, I wanted somebody who’d been around good horses, and it just seemed to be a good fit. I think he was ready to slow down to some degree, and it’ll be a good thing to have a slight lifestyle adjustment for him.”

“I’m a very competitive guy and I’d like to make this the best place there is to send a horse to get started or lay up,” Medina added. “I think Guinness has that same kind of mindset as well.”

So what does one learn in 25 years of working for a universally-respected Hall of Fame trainer? The secret sauce, he says, is in the care for the horse.

“The most important thing I learned from Shug is patience,” Medina said. “It sounds easy, but with horses, some people aren’t as patient as they should be. To me, he’s the best caretaker of a horse, he has a sixth sense with it. He treated each horse as an individual. Point of Entry, the way he trained, that’s not the way Orb trained, or Honor Code trained. And he was never hesitant to send a horse home for 30-60 days because there was the slightest thing he didn’t like. It was just incredible, when they came back, how different they would be. I really appreciated that about him.”

His heartfelt appreciation will keep Medina emotionally invested in the McGaughey stable. That, and a few promising young runners who happen to be sired by his favorite horse.