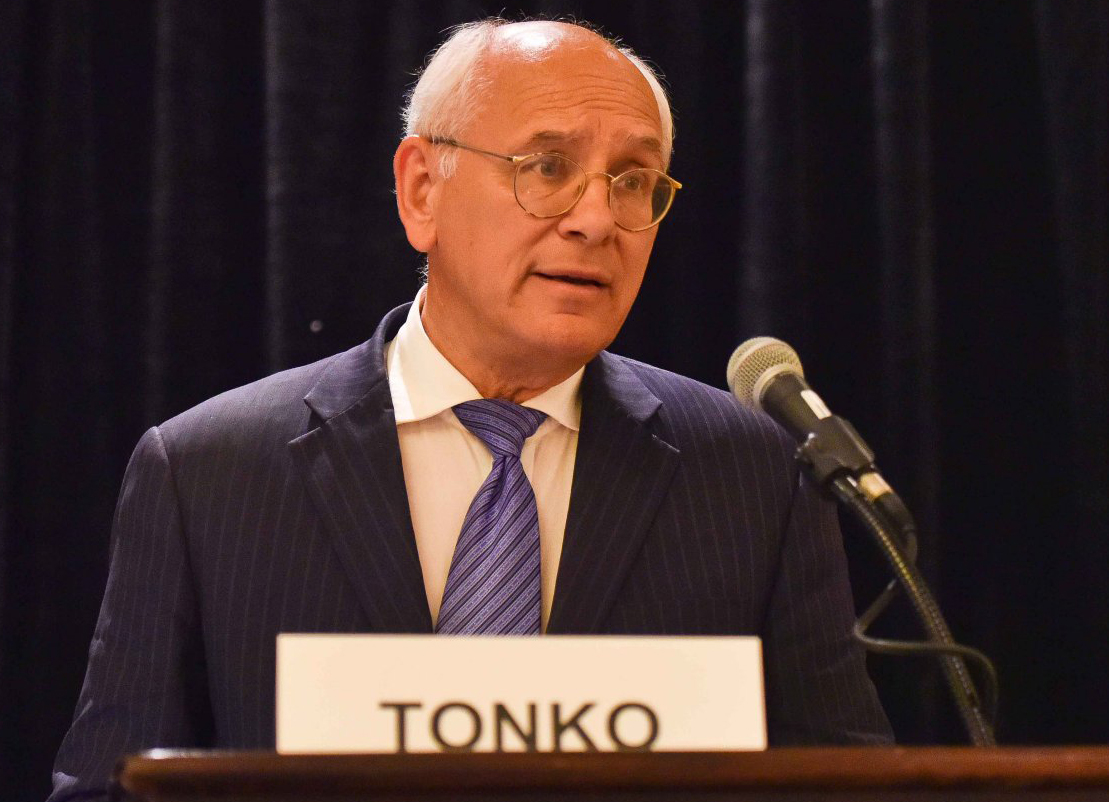 Though many other issues were discussed Sunday morning, the principal theme of The Jockey Club’s 64th annual Round Table Conference on Matters Pertaining to Racing was medication reform in the United States.

– In his keynote address, Winfried Engelbrecht-Bresges, chief executive officer of The Hong Kong Jockey Club, exhorted the U.S. to adopt the standards in place in other major international racing nations. “Unfortunately, the racing industry in the U.S. is seen as not being the leader and is lagging behind for various reasons,” he said. “In the interest of the sport globally, I urge all of the stakeholders in the U.S. to unite and implement what is necessary to safeguard our sport.”

– Just before Engelbrecht-Bresges had his turn at podium, Jeff Novitzky explained how he oversaw the development of the anti-doping program for the Ultimate Fighting Championship (UFC). Novitzky, a former federal agent, it the UFC’s vice-president for athlete health and performance.

– Earlier in the 2 1/2-hour program at the Gideon Putnam hotel in Saratoga Springs, N.Y., Congressmen Andy Barr (R-Ky) and Paul Tonko (D-NY), spoke about the progress of the bill they co-sponsored, the Thoroughbred Horseracing Integrity Act of 2015. The bill calls for a national racing authority with uniform rules and testing handled by the United Stakes Anti-Doping Agency.

The Jockey Club has advocated for a national approach, supports the Barr-Tonko bill and once again its yearly program for industry leaders was focused on the subject of strict oversight and enforcement. It is the approach that took shape during the long administration–1983 -2015–of The Jockey Club’s former chairman, Ogden Mills Phipps, who died in April. A video tribute to Phipps was shown prior to the intermission and Jockey Club chairman Stuart Janney announced that nearly $400,000 had been donated in Phipps’s honor to the Grayson-Jockey Club Research Foundation and The Jockey Club Safety Net Foundation.

James Gagliano, president and COO of The Jockey Club announced that the organization’s safety committee recommends changes in the use of the riding crop and to the National Uniform Veterinarian’s List.

“The Safety Committee calls for all regulatory authorities to prohibit jockeys from raising the arm above shoulder height when applying a riding crop, and to limit the crop’s use to not more than three times in succession until the horse has had an opportunity to respond,” Gagliano said. “And it calls for all regulatory authorities to better manage and mutually enforce rest periods for horses featured on any official veterinarian’s list. Our subsidiary, InCompass Solutions, will enhance its software to facilitate these efforts, and racing jurisdictions will be notified when a horse on a vet’s list in one jurisdiction is attempted to be entered in another.”

Last year, The Jockey Club announced that microchips will be phased into the registration process and become mandatory in 2017. Gagliano said that microchips were requested for nearly 75 percent of this year’s yearling crop.

The move to higher tech in the breeding business took another step Sunday with the announcement that The Jockey Club will transition to digital certificates of foal registration in 2018.

Nearly 9,000 miles separate Hong Kong and Saratoga Springs and Engelbrecht-Bresges delivered a lengthy presentation after making the long journey. He detailed how in 45 years the HKJC has developed its modest racing program into a world leader in quality and turnover, or handle, and how it reacted and rebounded when its business had a serious slump 10 years ago. Part of decline was an Asian financial crises and competition from casinos in Macau and illegal gambling, but there were other factors, too.

“Those interested in the game were already in the game, with many who were aging.

“Non-racing customers found racing not relevant – especially they found the racing fixtures, the race programs and the bet types very difficult to understand.

“We were not appealing to the potential customer segments – that is the young people and the middle class.

“We don’t have digital and mobile capacity.

“We were facing significant competition from the growing gaming and entertainment industry; they were all competing for the leisure time and betting propensity of the same group of target customers.”

That review, Engelbrecht-Bresges said, led the HKJC to change its approach and contributed to the recovery and record numbers. The HKJC handled $13.8 billion on its 83 days of racing last season.

“We were able to move to redefine our racing brand that is one which provides world-class racing as well as world-class betting and social entertainment,” he said. “We aimed to reach out to a new generation and to create relevance by extending racing as a key lifestyle and leisure activity.”

Beginning in 2009-2010, the HKJC invested $800 million over 10 years in hardware improvement to offer what it called a “Next Generation Racecourse.” That plan touched all levels of patrons and owners. The HKJC already possessed high quality tech but allocated another $500 million in technology, in part to appeal to younger customers. Its Race Simulator app launched in 2012-13 had 350,000 downloads in two weeks. It is now developing a training facility in China and is involved in delivering its racing to an international audience that is drawn to its large fields.

However, Engelbrecht-Bresges said the cornerstone of the HKJC business was keeping prohibited substances out of its racing. It controls every facet of its racing, including drug testing, having all vets who touch horses on its payroll, and its own state of the art lab.

The United States needs to follow the lead of other racing countries, he said, and toughen its approach.

“Going forward we will invest even more into research to develop capabilities to have even more powerful tools to detect attempts to manipulate races,” he said. “We firmly believe in the philosophy of prohibited substance-free racing and applying best practices to insure implementation should be adopted by leading racing jurisdictions, especially in the U.S. as one of the world leaders with its marvelous Thoroughbred history and wonderful bloodlines.”

Novitzky started his career as an investigator for the International Revenue Service and moved to the Food and Drug Administration, where he was heavily involved in high-profile doping cases involving Barry Bonds, Marion Jones and Lance Armstrong. He was hired to put the UFC anti-doping program in place. It started a year ago modeled on the World Anti-Doping Agency code and administered by the U.S. Anti-Doping Agency (USADA). Novitzky said that without exception, the UFC’s 529 athletes in 37 countries are subject to tests 24 hours a day, 365 days a year. First-time violators face four-year suspensions. He said that the first 1,200 tests yielded about 20 positives, a rate of about two percent.

“The success of any anti-doping program, especially as it relates to the business model of the company or organization is not positive tests on the back end and sanctions, but a deterrence on the front end of that program,” he said. “That’s why USADA and myself spent the first year of our program traveling throughout the U.S, traveling throughout the world, education our roster of fighters, those coaches, those trainers and those support on the seriousness and comprehensiveness of our program. We educated them that this program did not have loopholes and what that risk-reward calculation under this program looked like, that the risk far outweighed the reward that these drugs could bring.”

Noviztky said that if American racing moves to a national program with an independent administrator, such as the USADA, it will reap the benefits.

“Just like we have done, it should be put in place to set an example,” he said. “To set an example for other professional sports organizations throughout the world to show them that a comprehensive, robust anti-doping program not only sets the proper example for society, but is good for the sport, good for the fans, good your business, good for your bottom line.”

Barr, who represents Lexington, Ky., said he was warned not to get involved in legislation, that other attempts had failed, and the industry was divided on the subject. He decided to try anyway and developed the bill with Tonko, whose district includes Saratoga Springs.

“Today I’m proud to say our effort has been different because we set out to build a diverse and broad coalition of support, a coalition that now stands behind us and continues to grow,” he said. “Our inclusive efforts have allowed us to earn the endorsements from 17 different stakeholder organizations, which in turn has allowed us to earn support of more than 50 members of Congress and a growing interest in reform from both sides of the aisle in both houses of Congress.

“But to continue our progress and move legislation forward and to achieve our objective, to achieve safety and integrity through national uniform standards, we must continue an open and inclusive discussion about how we can improve the legislation to incorporate as many stakeholders and members of Congress as possible. Only with a consensus approach and an earnest willingness to compromise will we ultimately enact the reform we need.”

Tonko said that in a letter to him U.S. Senator Kirsten Gillibrand supports medication reform and her commitment to introduce a Senate version of the bill before the end of 2016.

Kip Levin, CEO of Betfair U.S. and TVG said that TVG has grown and is flourishing since its acquisition of HRTV last year and continues to improve its product. Levin said Betfair’s exchange wagering platform, now in operation in New Jersey, has attracted over one million worldwide customers.

“The results of New Jersey since launch in May are encouraging,” Levin said. “The age of the average new exchange customer is 20 years younger than the average New Jersey ADW customer. Eighty percent of the money wagered thus far has come from new customers that were not previously wagering on the 4NJBets product. Forty-five percent of the current customers are transacting with their mobile devices. And while the exchange in New Jersey remains in its infancy, it is doing what it’s supposed to do, give people who are not playing in the current system a contemporary, fast-paced way to interact with and enjoy our game.”

The Jockey Club also unveiled a new logo for its main organization and its affiliated companies. The logo was designed by Cornett Integrated Marketing after a review of the organization’s history of logos and trademarks.