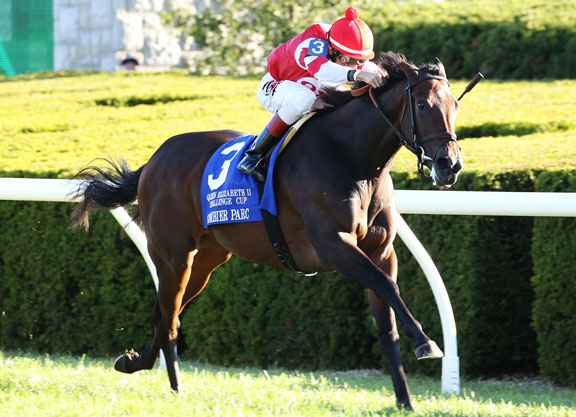 “She is a beautiful-moving Medaglia d’Oro filly and the first dam has been very productive. She was a horse I really liked.”

Those were the comments of OXO Equine LLC’s Larry Best when asked by TDN Editor-In-Chief Jessica Martini exactly what had encouraged him to spend $1.2 million on hip 82 a little more than two years ago on the first day of the 2017 Keeneland September Sale. Some 25 months on from the beginnings of that relationship with the daughter of Canadian Horse of the Year Sealy Hill (Point Given), that filly–now named Cambier Parc–added Saturday’s GI Queen Elizabeth II Challenge Cup S. presented by Lane’s End to her previous success in the GI Del Mar Oaks Aug. 17.

The QE II marked the fifth victory from eight career starts for Cambier Parc, but it was a front-running ride from John Velazquez that did the trick Saturday, eschewing the stalking tactics that saw her take down this year’s GIII Herecomesthebride S. at Gulfstream and the GIII Wonder Again S. at Belmont in June, in which she defeated her much-ballyhooed stablemate Newspaperofrecord (Ire) (Lope de Vega {Ire}).

“We talked about [the race strategy] in the paddock,” said trainer Chad Brown, who won last year’s race with ‘TDN Rising Star’ Rushing Fall (More Than Ready) and in 2012 with Dayatthespa (City Zip). “There wasn’t a lot of pace in the race. We know from her works–we’ve used her as a lead horse sometimes in her works, and she’s good that way. I gave [jockey John Velazquez] the option to go to the lead, and he took it. She really responded.”

Off without incident from the two hole, Cambier Parc seized the advantage and took her seven rivals along at a modest tempo, with Her Majesty The Queen’s Magnetic Charm (GB) (Exceed and Excel {Aus}) prompting whatever pace there was from second. Godolphin’s G1 Poule d’Essai des Pouliches winner Castle Lady (Ire) (Shamardal) enjoyed the run of the race from the box seat underneath Mickael Barzalona. Switched off nicely on the engine, Cambier Parc got the opening three-quarters of a mile in 1:14.41 and managed to pinch a break when Magnetic Charm called it a day in upper stretch. Clear entering the final furlong, Cambier Parc was able to hold sway as Castle Lady gained inches late. Princesa Carolina (Tapit) sat a midfield trip and stayed on for a never-nearer third, just ahead of the winner’s stablemate Cafe Americano (Medaglia d’Oro).

“When she got to the lead, she relaxed really well,” said Velazquez, winning his fifth QE II and third since 2014 (Crown Queen, Time and Motion). She relaxed in front. She had plenty to come running in the lane. Once she got to the lead, she relaxed and she opened up a length, a length and a half, and she decided to wait for the horses. I had to keep reminding her to keep running. I didn’t want to get surprised by another horse on the outside. I think if another horse got closer, she would have gone again.”

Cambier Parc is bred on the same cross over Thunder Gulch that is responsible for Medaglia d’Oro’s dual-surface Grade I winner Mshawish and was acquired by Bonne Chance for $750,000 when offered in utero at the 2015 Keeneland November sale. Sealy Hill, Canada’s Horse of the Year in 2007 after securing that country’s Filly Triple Crown, would go on to a pair of placings in the GI E. P. Taylor S. and belied odds of 48-1 to round out the exacta in the 2008 GI Breeders’ Cup Filly & Mare Turf at Santa Anita. A half-sister to three other graded stakes winners, Cambier Parc has a 2-year-old full-sister and a yearling half-brother by Into Mischief that Best purchased for $950,000 at this year’s Keeneland September sale.