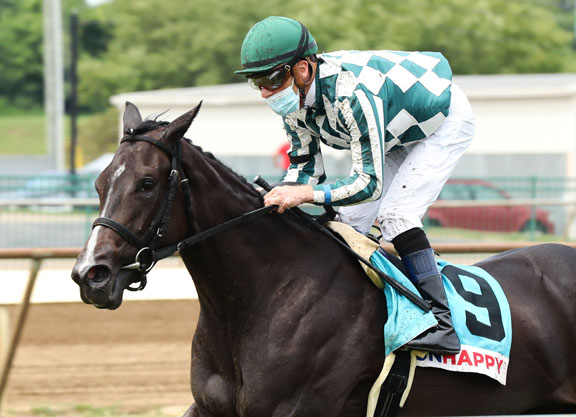 1st-Ellis, $46,200, Msw, 8-21, 2yo, f, 5 1/2fT, 1:06.71, fm.
NAVRATILOVA (f, 2, Medaglia d'Oro–Centre Court {GISW, $961,048}, by Smart Strike), backed as the tepid 5-2 favorite with a standout pedigree among this group, flew home late to ace her maiden test. Far back early among a very strung-out field, the bay first caught the eye when rolling into fourth entering the stretch. She continued to gobble up ground down the center of the course and blew by the tiring leaders to prevail by a widening 2 1/4 lengths. Fellow firster Music City Star (Tapiture) completed the exacta. The winner's dam took four starts to graduate, breaking through going nine panels on the Churchill turf as a May sophomore before scoring a career best in the GI Jenny Wiley S. at Keeneland the following season to cap a three-race winning skein. Navratilova is Centre Court's third foal and first winner. She's followed by an Arrogate filly and a Bernardini colt. Centre Court, a daughter of GSW and GISP Let (A.P. Indy) and a half to GSW Ravel (Fusaichi Pegasus), was bred back to Medaglia d'Oro for 2021. Lifetime Record: 1-1-0-0, $27,720. Click for the Equibase.com chart.
O-G. Watts Humphrey, Jr.; B-G. Watts Humphrey (KY); T-George R. Arnold, II.