Medaglia d'Oro Colt Gets Out in Time to Take Kitten's Joy 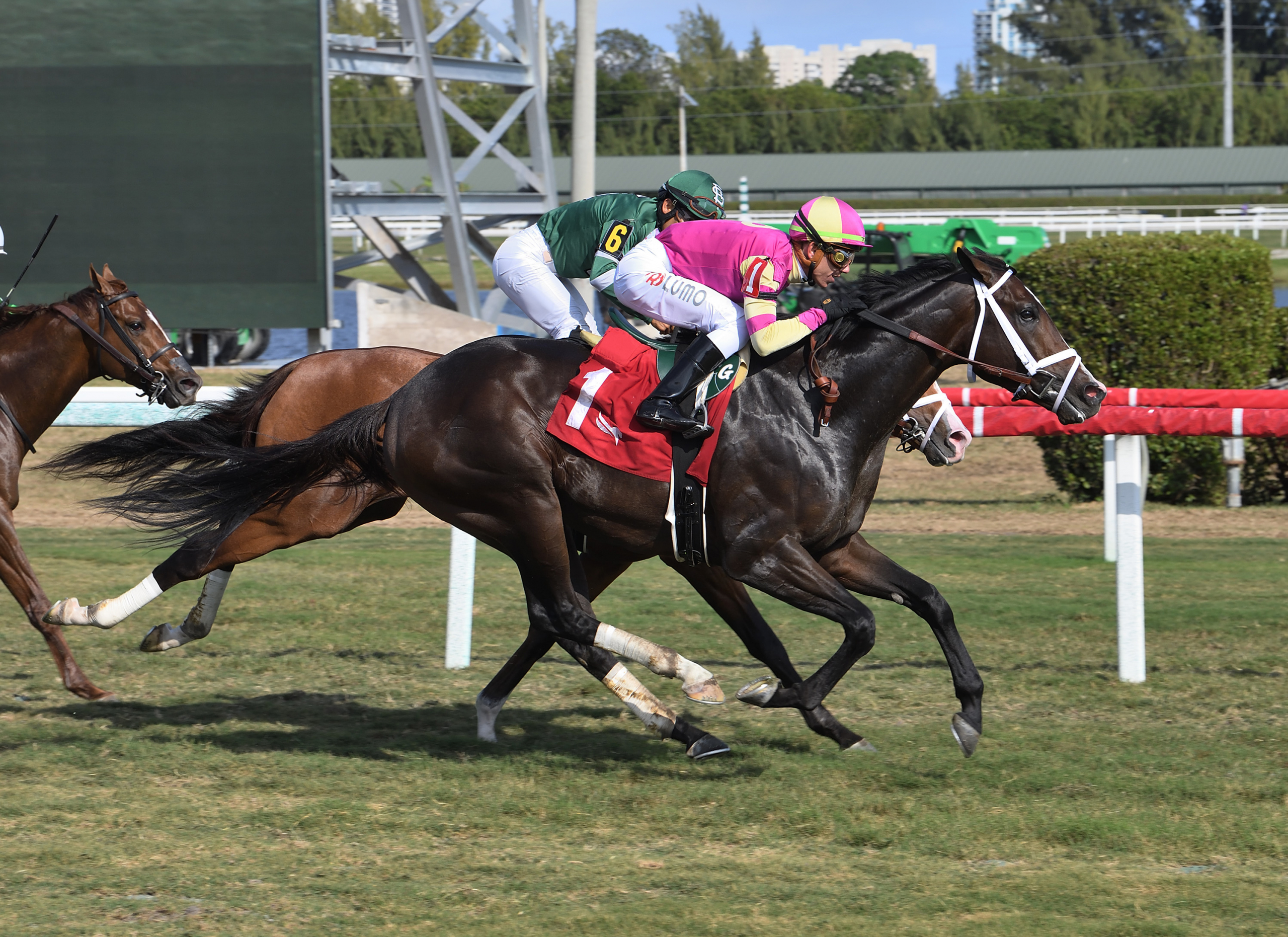 Whisper Hill Farm homebred Grand Sonata (Medaglia d'Oro) got out of a jackpot just in time Saturday to come out on top of Gulfstream's GIII Kitten's Joy S. exacta for the en fuego Todd Pletcher barn. Royal Spirit (Into Mischief) was second best, while favored Coinage (Tapit)–making his first start since finishing ninth in the GI Breeders' Cup Juvenile Turf–settled for third after showing the way.

Second in his Belmont unveiling to next-out GIII Futurity S. winner Slipstream (More Than Ready) in October, Grand Sonata donned cap and gown around two turns in a Keeneland off-the-turfer Oct. 16. He was a close-up fifth with some trouble in the Big A's Central Park S. Nov. 27, and showed good determination to take the Dania Beach S. by a head here on New Year's Day.

Off at nearly double his 3-1 morning line quote as Coinage took significantly more action that predicted, Grand Sonata broke well from the rail and settled into a good pocket spot behind Coinage and inside of Royal Spirit. Grand Sonata clearly had run after six panels in 1:11.88, but Tyler Gaffalione had to sit patiently and wait for daylight. Boxed in by Speaking Scout (Mr Speaker) when he tried to tip out, Grand Sonata had to hit the brakes, but once Speaking Scout could no longer keep pace, he was free to lengthen his stride and he quickened resolutely to get up by a neck.

“I thought he was a little bit overlooked today,” Pletcher, who saddled the one-two finishers in last Saturday's GI Pegasus World Cup Invitational Turf S., said of the winner. “All his turf races have been good. He had a really tough trip at Aqueduct and didn't get the win, but he's a really nice colt; very professional.”

Pletcher continued, “We were concerned there wasn't much pace on paper and Coinage can be tough when he gets loose, so we wanted to be aware of that. The fractions were pretty modest. I thought both horses were in good spots and both finished up well. Actually, I thought Royal Spirit might have had it for a second, but this horse has a big turn of foot and Tyler knows that. Once he got him in the clear they finished in a rush.”

Mandy Pope's Whisper Hill paid $1.1 million for dam A. P. Sonata, a daughter of GSW Moonlight Sonata and half to Grade II winners Wilburn (Bernardini) and Beethoven (Sky Mesa) as a KEESEP yearling. The late-debuting filly's best finish was a third-place finish going nine furlongs on the Keeneland dirt.