MD Commission Pushes Back on Lasix-Free 2YOs, The Stronach Group Vows to Write No Juvenile Races 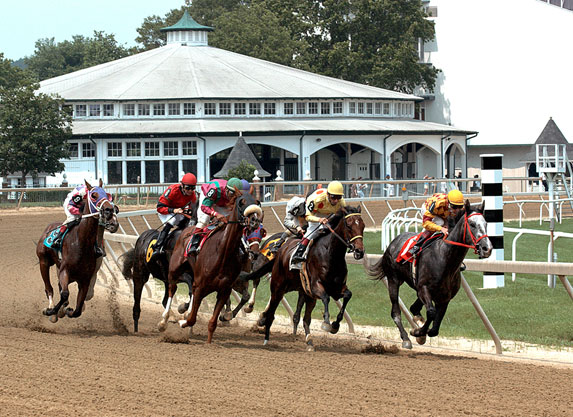 After the Maryland Racing Commission (MRC) on Thursday refused to vote or otherwise rule on a late agenda request to allow The Stronach Group (TSG) to card Lasix-free races for 2-year-olds, an attorney for the TSG-owned Maryland Jockey Club (MJC) told the commission that the MJC-owned Laurel Park wouldn’t be scheduling any juvenile races at all under the present rules that allow the use of the controversial anti-bleeding medication.

“We currently [don’t] have, and I don’t believe we will have, any intent of carding a 2-year-old race under the condition of the administration of Lasix,” said Alan Rifkin, the MJC’s lawyer. “Our position on Lasix isn’t going to change.”

With over 100 juveniles currently in training at Laurel and no races for 2-year-olds yet run or on the horizon in the state, Rifkin’s avowal prompted commissioner Thomas Bowman to predict a short-term “devastating effect on Maryland racing, because the horses are going to have to go out of state to run.”

Alan Foreman, the chairman/chief executive officer of the Thoroughbred Horsemen’s Association (THA), whose members include Maryland owners and trainers, said TSG did not approach horsemen or breeders in advance of bringing the matter up before the commission June 25.

“We suspected something was up weeks ago because they weren’t carding 2-year-old races,” Foreman said, adding that the THA reached out to TSG officials for an explanation. “We couldn’t get an answer. We waited weeks to get an answer. We kept getting bounced around.”

Foreman continued: “So here we have, in the middle of the COVID pandemic, the horsemen with their backs up against the wall economically. We’ve got an industry we’re trying to rebuild. We’ve got barns full of 2-year-olds, and they come in this past week and tell the commission, ‘Oh, by the way, we’re not writing 2-year-old races with Lasix. Either you do it our way, or we’re not going to write those races.’ And we have to tell our horsemen now to take their horses out of state.”

Michael Algeo, the MRC chairperson, likened the way the MJC broached the no-Lasix topic as akin to trying to change the rules in the middle of a football game.

“And if you don’t agree with the change of the rules, we’re going to take our ball and go home,” Algeo added.

Algeo made it clear at the outset of the discussion of the agenda item that the June 18 request in the form of a letter from TSG technically came in too late to be considered for the monthly meeting, but he wanted to end up including it because the medication issue was of such importance.

Algeo said the letter, signed by Craig Fravel, TSG’s chief executive of racing operations, stated, “we intend to begin scheduling races for 2-year-olds [without Lasix] and hereby inform the commission that your action is required.”

Algeo said he was “somewhat taken aback” at receiving what appeared to be more of a written directive, rather than a request, from TSG. He noted the letter was accompanied by a press release about the 2-year-old Lasix ban that seemed to suggest the commission’s compliance was a foregone conclusion. Algeo said TSG then submitted a lengthy legal memorandum only 48 hours before the June 25 teleconference, meaning it came in too close to the meeting for commissioners to read and understand in a timely manner.

“That, sir, put us in a very difficult position,” Algeo told Rifkin. He then added in a curt tone that underscored his annoyance, “And it’s a position that I don’t like to be put in.”

Nonetheless, Rifkin was allowed nearly 18 minutes of uninterrupted testimony to state TSG/MJC’s case on not allowing 2-year-olds to race on Lasix.

“We are not asking the commission for a ban on race-day Lasix. We agree with you Mr. Chairman, that is a question for another day,” Rifkin said. “All MJC intends to do here is present the opportunity to owners or trainers who voluntarily wish to race their 2-year-olds drug-free of Lasix…without the competitive disadvantage of other horses using Lasix.”

Rifkin said no new regulation or law would be needed to approve the Lasix-free races for juveniles. He explained that’s because the current Lasix regulations hinge on the word “permissible” and not “mandatory” when describing how the drug is to be used.

“That regulation speaks to what owners and trainers may do. Not what the [MJC] must do,” Rifkin said. “That is, there is nothing in that regulation that requires MJC to run any races for horses using Lasix.”

Rifkin then pointed out that another section of the state’s regulations limit Lasix doses on race day to “not more than 100” nanograms.

“Quite obviously, carding a race with zero nanograms of Lasix as a voluntary condition of entrance is less than the maximum permitted 100 nanograms,” Rifkin said. “That’s entirely consistent with that regulation.”

As for the request coming in only a week before the meeting (and after an edition of the MRC agenda had already been publicly noticed), Rifkin said, “I know there is some concern that this has come upon you fast. But it really hasn’t in some respects. The debate over Lasix has been here for awhile.

“We submit that MJC has a legitimate business reason and absolute right to conduct drug-free races,” Rifkin continued. “There is no law, regulation, or condition that prohibits that action, [and that the 2-year-old Lasix ban] is in the best public interest of equine safety and the public’s general interest.

“While it may be permissible–in other words voluntary–for an owner or trainer to administer Lasix, it does not mean the track licensee is obligated to be an accomplice and run races for the benefit of those horses who have been administered the drug.

Algeo replied that, “I understand what your argument is. I understand your interpretation. With all due respect, I just simply disagree with it.”

Algeo said that according to his interpretation, there is no statutory, case law, or regulatory authority that allows the commission to tell the MJC it can run certain races without Lasix.

“I happen to believe that…the best interests of Maryland racing would be to actually continue racing 2-year-olds with Lasix,” Algeo said.

After Algeo made his points, Rifkin asked for clarification: “Are you telling us we must run races for 2-year-olds with Lasix?”

On the heels of that exchange was when Rifkin, in answer to another commissioner’s suggestion that Laurel try carding both Lasix-allowed and Lasix-free juvenile races to see what happens, stated his above-quoted desire by the MJC not to write any 2-year-old races at all under the current circumstances.

Algeo closed the discussion by saying that the commission’s official action on the item for Thursday would be to refer the no-Lasix proposal to the MRC’s newly formed safety and welfare committee, with the request that the issue be expedited so it can be taken up at a future meeting before the full commission.