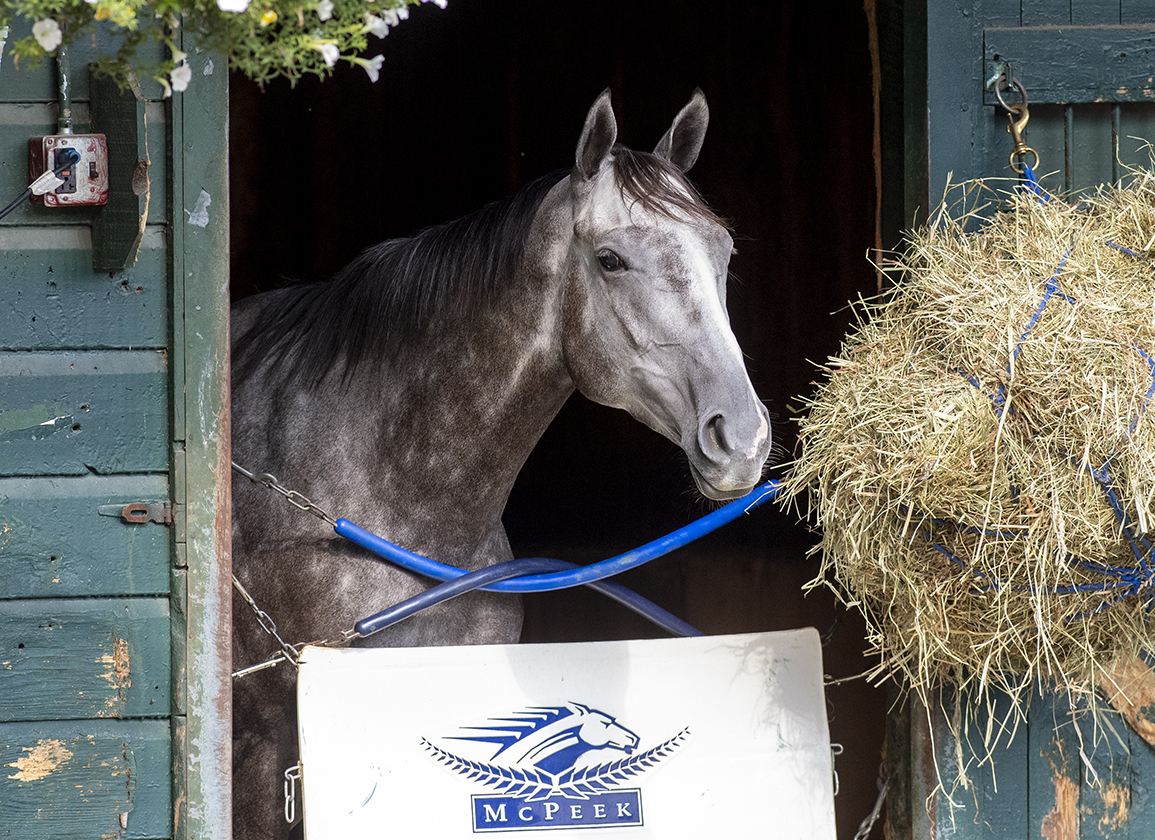 After the 'TDN Rising Star', owned by Phoenix Thoroughbred III, rebounded from an uncharacteristic poor performance in the GI Longines Kentucky Oaks with a pair of impressive wins, McPeek aimed her for Saratoga's two big races for 3-year-old fillies. That plan was scuttled the evening of opening day, July 15, when the horses in Barn 86, which McPeek's stable shares with Jorge Abreu, were placed under a 21-day quarantine. The ban on racing and limits on training were put in place when an unnamed, unraced 2-year-old filly trained by Abreu tested positive for equine herpesvirus.

Though none of McPeek's horses had any issues, he was prohibited from entering them in any races until early August. That meant Crazy Beautiful had to pass the Coaching Club on July 24 and GI Runhappy Travers S. prospect King Fury (Curlin) missed the GII Jim Dandy S. on July 31.

Crazy Beautiful, winner of half of her 10 career starts, has trained up to the historic Alabama, the 1 1/4-mile test that is the companion to the Travers. The Alabama will be her first start since a smashing six-length victory in the GIII Delaware Oaks July 3. During a phone interview from France where he was attending the Arqana sale, McPeek said Crazy

Beautiful is ready for the Alabama.

“I think she's doing well,” McPeek said. “I thought she would have run well in the Coaching Club, but, of course, that didn't happen. She's doing super and we're excited about it.”

This season, Crazy Beautiful was on what was roughly a once-a-month racing schedule. She started the campaign at Gulfstream Park with a second in the Feb. 27 GII Davona Dale S. and won the GII Gulfstream Park Oaks Mar. 27. Following her 10th in the Kentucky Oaks, McPeek sent her to California, where she won the GII Summertime Oaks under Mike Smith May 30. Smith, who was up for the Delaware Oaks, has a commitment at Del Mar  and will be replaced by Jose Ortiz. The break between the Delaware Oaks and the Alabama is 49 days.

“I think the added time is going to help her, probably,” McPeek said. “And I do think that she will run big. She's done everything right all year. We've shipped around and done a lot of good stuff with her. She's won three out of her last four. The Alabama would be a home run for her.”

In the Alabama, Crazy Beautiful is expected to face Kentucky Oaks winner and division leader and fellow 'Rising Star' Malathaat (Curlin) as well as Maracuja (Honor Code), who handed Malathaat her first career loss in the CCA Oaks. Also expected to enter are Army Wife (Declaration of War), Clairiere (Curlin), Played Hard (Into Mischief) and Will's Secret (Will Take Charge).

McPeek won the Alabama last year with Swiss Skydiver (Daredevil) and the 2018 running with Eskimo Kisses (To Honor and Serve). The last trainer to win the Alabama in consecutive years was Todd Pletcher with Princess of Sylmar (Majestic Warrior) in 2013 and Stopchargingmaria (Tale of the Cat) in 2014. The last trainer to win the race three times in four years was Oscar White (1949-51-52) with horses owned by Walter Jeffords. According to Equibase, McPeek has won with two of his four starters.

Crazy Beautiful is out of Indian Burn (Indian Charlie) and was purchased as a yearling in 2019 at Fasig-Tipton October for $250,000. She is McPeek's first purchase for Phoenix and the syndicate's top earner.

All three of Crazy Beautiful's wins this year have been at 1 1/16 miles. The Kentucky Oaks, her lone try past 8 1/2 furlongs, was her worst finish.

“It was a terrible trip,” McPeek said. “She got off awkward and bumped in and never really got up into the race,” McPeek said. “I think it was a bit of a toss. I think she is certainly better than that. Hopefully she makes amends. We'd like to get a Grade I with her. She's done everything else.”

With all the traveling she has done, running her 10 races at six tracks and with wins at four tracks, McPeek said a victory over Malathaat in the Alabama could put the one-run filly in contention for the division title.

“It's a huge race, the Alabama,” he said. “and you'd have to put her, certainly, in the mix for champion 3-year-old filly, if she pulls it off.”