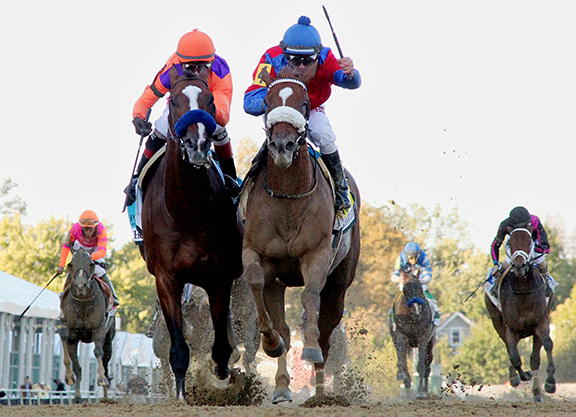 Trainer Ken McPeek had set himself up for second guessing when he decided to run Swiss Skydiver (Daredevil) in the GI Preakness S.. Not only would she have to face males, the Preakness would be her ninth race of the year and Pimlico would be the ninth track she has competed at in 2020. With a start in October, she would have raced during every month on the calendar but April.

By modern standards, it has been a bruising schedule and one that few trainers would ever even consider. Most will not push their top horses, preferring a four or five-race campaign with ample time off between races. Had McPeek followed conventional wisdom, after a second-place finish in the Sept. 4 GI Kentucky Oaks, Swiss Skydiver would have “trained up” to the GI Breeders' Cup Distaff. Instead, McPeek picked the most difficult challenge out there, a start against males in the Preakness, where she was dismissed at 11-1.

But instead of running a tired horse, McPeek brought a battle-tested, sharp and game filly to Pimlico. In a stirring stretch drive, she outfought a GI Kentucky Derby winner in Authentic (Into Mischief) to win by a neck. It was the best race of her career, and also her trainer's finest moment. McPeek proved that his way works, that horses don't have to be babied to be successful.

“I do believe that if they're doing well don't be scared to run,” McPeek said. “We buy our racehorses to run not to just watch them train. I do think there is some over analysis, where people say, 'Oh, no, you're running them back too quickly.' When I first started training it wasn't anything to run a horse back in 10 days, two weeks. Now it's almost as if they write you off if you do that. Four weeks is plenty of time. It's no problem, especially if a horse is healthy. I have always believed that when you have one that is doing well you shouldn't hesitate.”

McPeek never took the challenge of running a filly in the $1-million Preakness lightly. On paper, it looked like Swiss Skydiver might be overmatched. She had already faced males once, coming up short in the GII Blue Grass S. She finished second behind Art Collector (Bernardini), who she'd have to face again in the Preakness. And she probably wasn't at her very best in the Oaks when beaten by long shot Shedaresthedevil (Daredevil).

But the more he thought about it, he couldn't find a reason not to run. The other options were to face older fillies and mares in a race like the GI Spinster S., try the turf for the first time in the GI Queen Elizabeth II S., race in a GII Black-Eyed Susan S., which has a $250,000 reward or stay on the sidelines until the Breeders' Cup. The risk of running in the Preakness was higher than it was for the other possible races, but so was the reward.

But if not for a push from his wife, Sherri, he might not have gone in the Preakness.

Owner Peter Callahan was also on board.

“I could have run her against older fillies or on the grass and she could have certainly won those races,” McPeek said. “But Peter Callahan and I both think big. Peter is as game as Dick Tracy and I am too. We talked about it and I told him I want to run her in the Preakness and he said go for it. Some owners might have over thought it. He just went with the flow on the whole thing all year. We've been rewarded, thank goodness.”

He collected his first Triple Crown victory in 2002 when winning the Belmont with Sarava, who looked hopelessly overmatched when facing War Emblem, who was shooting for a Triple Crown sweep for Bob Baffert. Sent off at 70-1, Sarava is the longest priced horse to win a Belmont S.

“I just didn't know how good he is. You've got to throw them in the ring sometimes to find out,” he said after the race.

In some respects, his willingness to take chances hasn't served him well. Owners flock to the trainers with the highest winning percentages and McPeek isn't one of them. He is winning at a 17% rate this year, but is only a 15% trainer for his career. He says that owners need to look beyond winning percentages.

“I think trainer winning percentages are ridiculous,” he said. “I am what you could call a progression trainer. I like the first race to be a good race, the second race to be better and the third race to be the best race. If you don't win first time out you hurt your percentage. You also have to remember how important black-type is. I could run in an allowance race or I could run in a stakes to get black-type and I will take chances in stakes. Black type is especially important with fillies. Black-type is the most important thing in the world to people who breed horses. Long-term success depends on their residual value. Worrying about my win percentage is probably about number nine down on my list of the things I worry about with each horse.”

The Preakness capped off the best two days of McPeek's career. On Friday, he finished one-two in the GI Darley Alcibiades S. at Keeneland. Simply Ravishing (Laoban) romped and may be tough to beat in the GI Breeders' Cup Juvenile Fillies. Like Swiss Skydiver, she hardly broke the bank at the sales. She was purchased for $50,000 as a yearling at the Fasig-Tipton Kentucky Fall Yearling Sale. That's $15,000 more than he paid for Swiss Skydiver at the 2018 Keeneland September sale.

McPeek will have one more chance to pick the tougher of two races for Swiss Skydiver. After the win in the Preakness, an argument can be made that she belongs in the GI Breeders' Cup Classic for another chance of beating males. The safer choice would be to go in the GI Breeders' Cup Distaff. McPeek said Sunday that he hasn't made his mind up yet but said he prefers the Classic distance of a mile-and-a-quarter over the Distaff distance of a mile-and-an-eighth. A Classic would win would mean a Horse of the Year title, which might not be the case if she were to win the Distaff. The gunslinger, McPeek may not be able to resist the temptation to run in the Classic.

But no matter which race she runs in, Swiss Skydiver will no doubt show up. She's been first or second in each of her last six races while facing the best 3-year-old colts and fillies in the sport. Her trainer must be doing something right.