McKinzie Aiming for Pegasus, But Needs a Spot 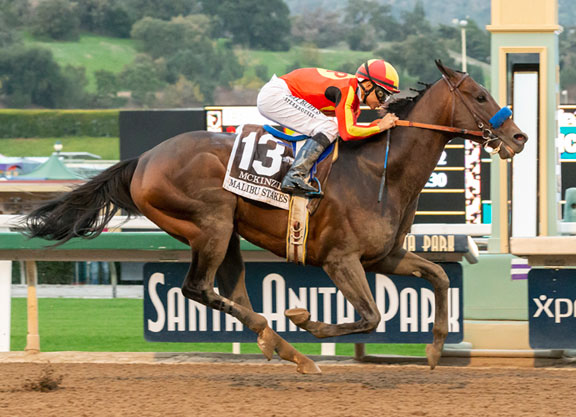 The McKinzie (Street Sense) camp has decided it wants to take a shot at the $9-million GI Pegasus World Cup at Gulfstream Park, but there remains an obstacle: they did not purchase one of the $500,000 spots for the race and those spots are now sold out.

“I knew the slots were gone when he won the [GI] Malibu S., so I haven't really talked much about going in the Pegasus,” trainer Bob Baffert said. “But if he's doing really well and an available spot comes up, we'll go. If there's not a slot available for him we're not going to worry about it.”

In other Pegasus news, the Daily Racing Form reported yesterday that Tom's d'Etat (Smart Strike) has joined the field for the Jan. 26 race. He has won four in a row, but has never run in a graded stakes event. Based at Fair Grounds with trainer Al Stall, his last win came in the Tenacious S. Dec. 22.

With so much maneuvering behind the scenes with people owning spots and trying to make deals with others who do not own spots, it can sometimes he hard to keep track of who is in and who is out of the Pegasus. It appears that nine horses have committed to the field, which is restricted to 12. They are Accelerate (Lookin at Lucky); Tom's d'Etat; Kukulkan (Mex) (Point Determined); City of Light (Quality Road); Audible (Into Mischief); Bravazo (Awesome Again); True Timber (Mineshaft); Seeking the Soul (Perfect Soul {Ire}); Gunnevera (Dialed In).

It appears there are spots still available and it would make perfect sense for one of those stakeholders to want to make a deal with the McKinzie team. McKinzie, who has always been a highly regarded member of the Baffert stable, threw in a clunker when 12th in the GI Breeders' Cup Classic, but rebounded with an impressive win in the Malibu. He could be second choice in the race behind Accelerate.

“I'm going to breeze him on Saturday,” Baffert said. “I want to run him when he's super right. I don't want to rush anything. I would like to go but if I can't find a spot, there's nothing we can do about it. I can't commit to the race without a spot. If it happens, it happens.”

As for his embarrassment-of-riches collection of 3-year-olds, Baffert will look to strengthen his hand Saturday at Santa Anita when he sends out Much Better (Pioneerof the Nile) and Coliseum (Tapit) in the GIII Sham S. Though he's only run once, winning a maiden, Coliseum will be the likely favorite in the Sham. Owned by Godolphin, he was already being hyped before his first start, which he won by 6 3/4 lengths with Joe Talamo aboard.

“Coliseum has so much raw talent,” Baffert said. “He is really, really good. He has the talent but he has an immature mind. We're slowly getting him there. He wants to get tough, rank. Talamo has been working him. He needs to find a way to wrestle that speed, particularly in the middle part of the race.”