McCarthy Sends City of Light Off to Stud After Pegasus Triumph 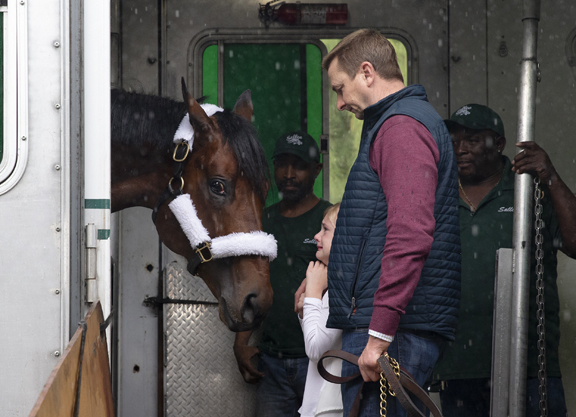 Mike McCarthy and his daughter, Stella, with City of Light | Zoe Metz photo

It was a bittersweet Sunday morning for trainer Mike McCarthy, who spent much of the 2 1/2 hours he was at Gulfstream Park in the stall with William and Suzanne Warren's City of Light (Quality Road), a dominant winner of Saturday's GI Pegasus World Cup Invitational over a sloppy track. While expressing his gratitude to City of Light for giving him the greatest win of his training career, McCarthy savored the final few moments with the horse before he boarded a horse van bound for Lane's End Farm, where he will enter stud this year.

“I try to spend as much time as I can with him, to sit around,” McCarthy said before departing Gulfstream Park for a flight back to Southern California. “I'm sure by the end of the week, he's sick of me sitting here staring at him all day long.”

McCarthy had City of Light walk for about a half-hour around the shedrow, then get a bath, followed by another lengthy walk, much of the time spent with the trainer on the shank.

“He's the horse of a lifetime,” McCarthy said. “I don't know what else I can say. Unfortunately he got beat a couple of times late in the spring and in the summer, in the Forego, I thought he did everything right [when second]. He's redeemed himself.”

Champion Accelerate (Lookin At Lucky), third in the Pegasus, received a brief visit from trainer John Sadler Sunday morning before boarding the same van with City of Light headed for Lane's End. Sadler had the five-time Grade I winner take a brief jog before pronouncing him sound.

“It's like sending your kid off to college,” Sadler said. “We'll see him in Kentucky, so it's not like he's going far. Hopefully we'll be back there and see him soon.”

“We'll go home, give him a little rest in California and regroup,” Sadler said.

Meanwhile, WinStar Farm, China Horse Club International, Starlight Racing and Head of Plains Partners's Audible (Into Mischief), who was fourth in the main-track edition of the Pegasus, emerged from his effort in good order and is considered possible for the G1 Dubai World Cup Mar. 30, according to trainer Todd Pletcher.