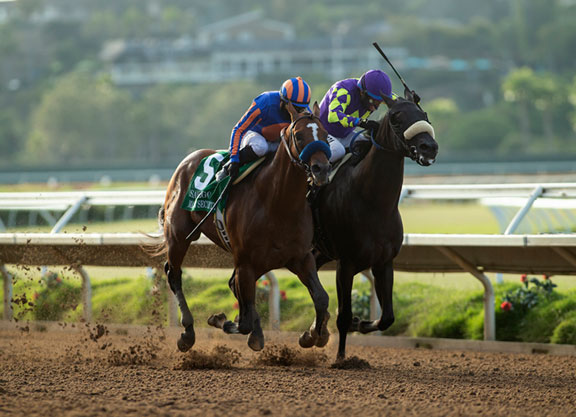 “I actually thought he was pretty good right after the race being that I only had him about 80%,” Baffert said. “I didn't think he'd have to do a stop-and-go movement [during the race] but he showed what a great horse he is.”

Making his first start for Baffert, first in five months, and under new jockey Abel Cedillo, Maximum Security vied with Midcourt (Midnight Lute) for the lead through the first quarter in :23.74, dropped back to third, 2 1/2 lengths behind Midcourt at the half-mile mark, rallied to draw even with an eighth of a mile to go and prevailed by a nose at the end of the 1 1/16-mile race.

“It's a good starting point, we learned a lot about the horse, now we're caught up and he's ready to go,” Baffert said.

Either the GI TVG Pacific Classic Aug. 22 at Del Mar or the GI Woodward S. Sept. 5 at Saratoga is next for the 4-year-old, Baffert added, with the former a more likely proposition.