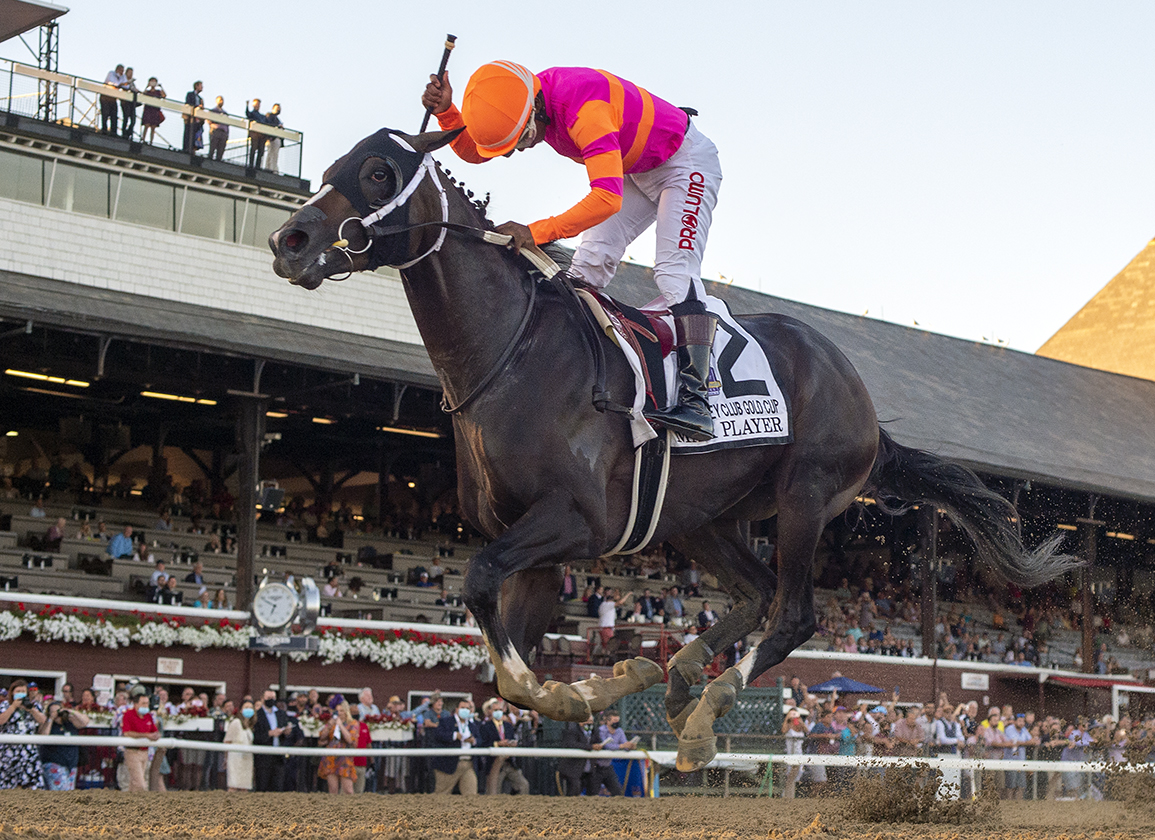 George Hall and SportBLX's Max Player (Honor Code) proved his bounce-back GII Suburban S. score in July was no fluke as he again showed more speed and pulled away to an emphatic victory in the repositioned GI Jockey Club Gold Cup at Saratoga. A fringe player on last year's Triple Crown trail, the Steve Asmussen trainee has stamped himself as a legitimate GI Breeders' Cup Classic threat in two strong efforts at 10 furlongs, and earned an automatic berth into the year-end championship event Saturday as part of the “Win and You're In” series.

Scrubbed on by adept gate rider Ricardo Santana, Jr. from the blocks, 7-2 Max Player locked on to even-money Forza Di Oro (Speightstown) through a half in :48.70 and six panels in 1:13.14. The dark bay cranked up the pressure heading for home as last year's Jockey Club winner and 'TDN Rising Star' Happy Saver (Super Saver) loomed a threat just in behind. Forza Di Oro cut the corner and briefly looked like he might open back up, but Max Player hit his stride by midstretch and powered away from there, relishing the real estate, to post the four-length victory. Happy Saver picked off the chalk late for second.

“It was beautiful,” said Asmussen, who took this historic event in both 2007 and 2008 with fellow Hall of Famer Curlin and again in 2010 when it was contested at Belmont Park. “Max, in the Suburban, ran that race under different circumstances on an off track. For him to do this on a fast track in the Jockey Club Gold Cup here at Saratoga, it is very satisfying. This is who he is, and I thought it was a dominating win.”

“I was happy with him. Today, he broke good, so I was really happy with it. The trainer is doing all the [work],” said Asmussen's go-to rider Santana.

Overcoming a tendency to start slow in his early outings, Max Player finished fast to take the GIII Withers S. third out last February for then conditioner Linda Rice. He finished well-beaten thirds behind Tiz the Law (Constitution) in both the GI Belmont S. and track-and-trip GI Runhappy Travers S. over that summer, but was transferred to Asmussen ahead of a fifth-place GI Kentucky Derby run. Fifth in the GI Preakness S. in October, he was shelved until the lucrative Saudi Cup Feb. 20, but that long journey proved fruitless as he checked in a distant 11th.

GIII Pimlico Special S. May 14, but looked like a different horse from start to finish last time when belying 11-1 odds in defeating subsequently sidelined G1 Dubai World Cup hero Mystic Guide (Ghostzapper) in the July 3 Suburban over a sloppy track.

“I really thought we had a chance with him at Churchill [in the 2020 Kentucky Derby], the way he was training over the track,” Asmussen said. “He lost so much ground early in the race and then fought the dirt from where he was. He didn't even begin to level off until the last eighth of the race and still ended up fifth.

“He likes good spacing between his races. Ricardo has done a tremendous job of putting him into the race, so he can actually perform.

“We went back with him to the gate and started from a hand open, just to leave the gates. Ricardo did a tremendous amount of work with him there and knows the horse really well. It took some riding from Ricardo today in the first three or four jumps but immediately, when he got him going, 50 yards from the gate [I thought] 'you get your chance, I'm glad to see this.'

This has certainly been a meet to remember for Asmussen, who became the all-time winningest trainer in North America last month. He and Santana took both the GI Forego S. and GI H. Allen Jerkens Memorial S. a week ago, and have live chances in both the GI Spinaway S. and GI Hopeful S. during the final two days of the meet.

“It's been a dream meet. It really has,” he said. “With achieving the record here. With the fans coming back. With how it felt. At Saratoga–not only do you have fans–you have educated fans. They're aware of racing. To set the record here and this is the third Grade I win of the meet. It's been a dream meet and it will be beautiful to reflect on, but we have two Grade Is left before we're there.”

As for the beaten favorite, trainer Bill Mott said, “I'm disappointed that he didn't get the 10 furlongs. I just didn't think he had any excuse. We've got to see. There's another race; the [Oct. 2 GI] Woodward could be a possibility [at 1 1/8 miles], I suppose. But it's a little early to commit to anything.”

Sire Honor Code displayed his own affinity for the Spa, earning 'TDN Rising Star' status for a debut score on the closing Saturday card in 2013 before adding the GI Whitney S. here two years later. He has added a second and third highest-level winner to his CV as a stallion at the stand, having also been responsible for Santana-piloted GI Coaching Club American Oaks upsetter Maracuja. All three of his graded winners have won at the Grade I level, and he has seven stakes winners overall.

Dam Fools in Love was an $80,000 Fasig-Tipton Midlantic yearling who racked up a sizable bankroll herself on the track, but has proven even more valuable in the breeding shed. The half-sister to MGISW International Star (Fusaichi Pegasus), from the deep family of Halory Hunter, Van Nistelrooy, et al, produced black-type earners with each of her first three foals, including $750,000 KEESEP yearling and Group 2-winning juvenile Seahenge (Scat Daddy). After foaling Max Player, Fools in Love was put in foal to Speightstown and brought $1 million from Cheveley Park Stud at KEENOV '17. She did not produce a foal in 2018, but is responsible for Ulysses (Ire) colts of 2019 and 2021 and a yearling filly by Frankel (GB).

Not For Love is the broodmare sire of four Grade I winners (10 graded and 63 black-type overall), including dual Horse of the Year California Chrome, a fellow A.P. Indy line product who sired his first graded winner on Saturday's card in GII Prioress S. heroine Cilla.