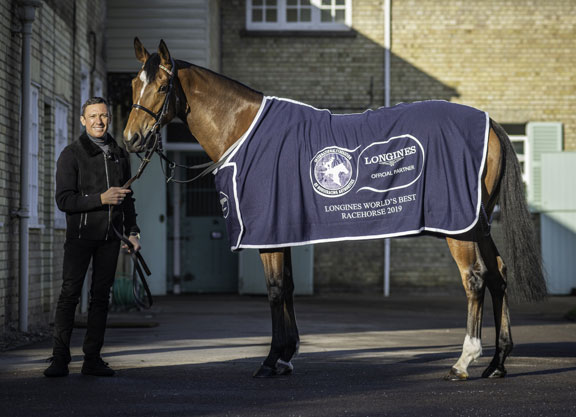 Prince Khalid Abdullah's champion mare Enable (GB) (Nathaniel {Ire}) is bidding to become the first horse to take three editions of the G1 King George VI and Queen Elizabeth S., as she is one of eight to stand their ground at the latest entry stage. She sustained only her second career loss with a 1 3/4 second when going for a three-peat in the G1 Prix de l'Arc de Triomphe at ParisLongchamp in October and was the bridesmaid once again kicking off her 6-year-old campaign in Sandown's G1 Coral-Eclipse S. behind Ghaiyyath (Ire) (Dubawi {Ire}) on July 5. The Ascot cornerstone also drew the Juddmonte colourbearer's stablemate, fellow John Gosden trainee and MGSW Fanny Logan (Ire) (Sea The Stars {Ire}) who won the G2 Hardwicke S. at Royal Ascot in June.

Abdullah's racing manager, Teddy Grimthorpe, said, “We're very happy with Enable. Everything has been straightforward since the Eclipse and we think she's come on for that run. We're looking forward to Saturday.”

“These big races are not supposed to be easy to win,” added Grimthorpe. “It's not going to be a very big field, obviously, but there are only so many horses at that level. It's a shame there's no 3-year-old in the race, but we're just concentrating on our ourselves and Enable seems in good shape.”

The dual G1 Prix de l'Arc de Triomphe winner's stiffest competition however hails from across the Irish Sea, as Aidan O'Brien saddles six for the Coolmore partners in the 1 1/2-mile feature. Star fillies Magic Wand (Ire) (Galileo {Ire}) and  MG1SW Magical (Ire) (Galileo {Ire}), second to Enable in the GI Breeders' Cup Turf back in 2018, are both slated to take part. The former, a Group 1 winner in Australia, and first in the June 13 G2 Lanwades Stud S., was a last out fourth in the Coral-Eclipse. Magical warmed up for this with an easy 4 1/2-length win in the G1 Pretty Polly S. at The Curragh on June 28.