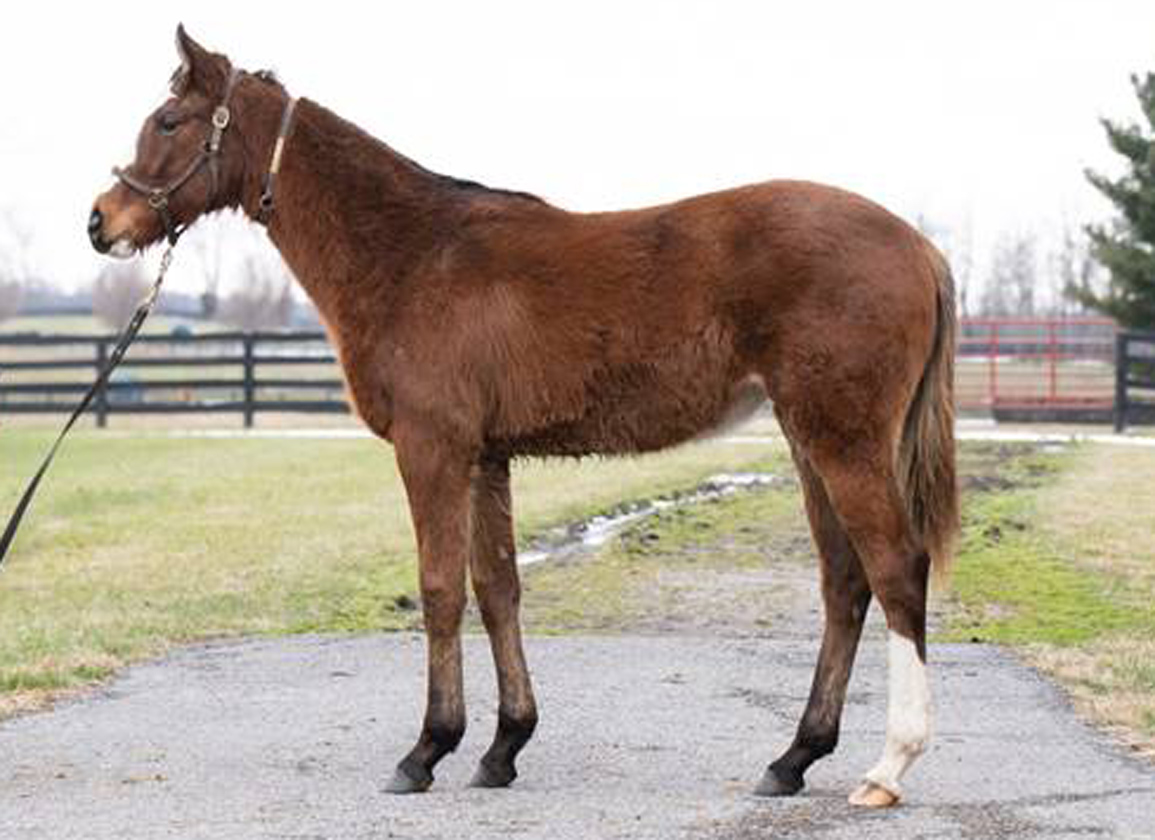 In this edition of our ongoing mating plans series, we spoke with Marie Jones with additional notes from Katie Taylor and Doug Cauthen.

Marie Jones is carrying on the successful breeding program that she first started with her late husband Aaron. Their program is responsible for Grade I winners and champions including Ashado, Speightstown, Drosselmeyer and Mrs. McDougal, as well as the dam of Life is Good. Today, her high-end, boutique operation focuses on acquiring accomplished, well-bred mares and maintaining a portfolio of shares and breeding rights in proven commercial sires. Her current stallion portfolio includes Candy Ride (Arg), Violence, Not This Time, Medaglia d'Oro, Tapit and Into Mischief.

ENCHANTED GHOST (m, 7, Ghostzapper – Uniformly Yours, by Grand Slam) to be bred to Tapit

Enchanted Ghost is currently in foal to Into Mischief. She has a fabulous Tapit yearling filly who is one of the best, if not the best, foal of her crop. She will be going back to the same sire.

The Tapit-Ghostzapper direct cross has not been tried many times yet but has already produced GIIISW Bellavais. Tapit is also the sire of GIIISW Bandbox, who is out of a mare bred Grand Slam over Deputy Minister.

GLORY OF THE NILE (m, 3, Pioneerof the Nile – Gloryzapper, by Ghostzapper) to be bred to Violence

Glory of the Nile is a young, homebred mare. She had a fantastic Candy Ride filly this year who was the first foal to arrive at Taylor Made.

Mamma Kimbo is currently in foal to Not This Time. She will be bred to Medaglia d'Oro. It is a good mating physically and the El Prado-Forestry cross has produced 9% stakes winners (A Nick).

NOTED AND QUOTED (m, 8, The Factor – Silver Cub, by City Zip) to be bred to Uncle Mo

We love this mating physically because Uncle Mo can lend some size and scope to this mare. This is also a very current and fashionable mating mimicking the cross of current GSW Enola Gay (Uncle Mo). The second dam of Uncle Mo's GISW Mo Town is bred Carson City over Danzig and Uncle Mo is also the sire of GSW Moon Colony, who is out of a Carson City mare.

Princess La Quinta is in foal to Tapit and she is booked to Into Mischief this year. Her first foal was an Into Mischief colt who sold well as a yearling, going to SF Bloodstock and into a good program on the track. We are hoping he finds success in his new program to support the 2023 foal out of this mare. 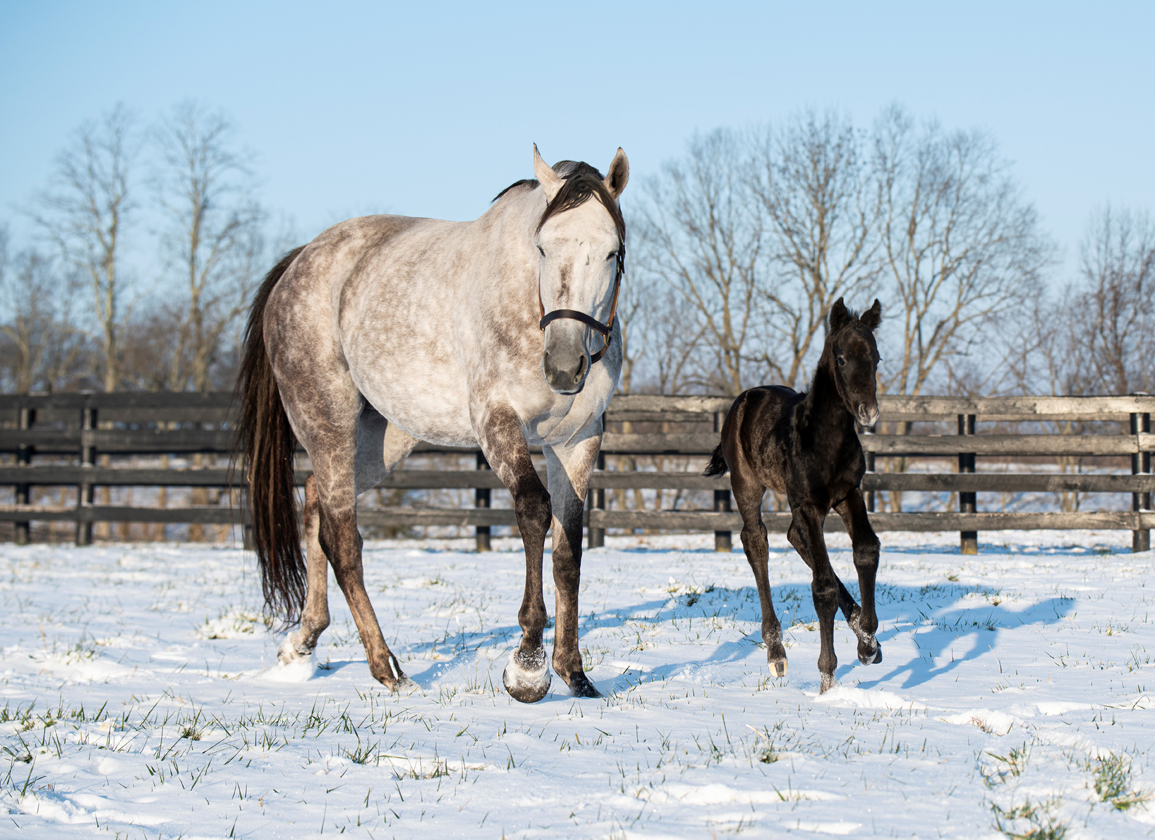 Gone West has been one of the key crosses for Into Mischief.  He has produced three Grade I winners from the cross including his Kentucky Derby hero Authentic. The other two are out of mares by Speightstown, who is bred on a similar Gone West-Storm Cat cross to this mare.

STREAK OF LUCK (m, 7, Old Fashioned – Valeria, by Elusive Quality) to be bred to Into Mischief

This mare foaled a feisty colt by Authentic last month. He was actually the first Authentic foal to hit the ground. She will be bred to Into Mischief this season.

SWEET KISSES (m, 5, Carpe Diem – True Kiss, by Is It True) to be bred to Charlatan

Sweet Kisses will be having a foal by Into Mischief this year and will then be bred to Charlatan. Charlatan is by Speighstown, who my husband and I bred years ago.

Tapassion is in foal to Violence and is booked back to Candy Ride. This mare's yearling Candy Ride colt is lovely. He is one of the top foals in the crop, so we are hoping to go back on this cross and get a similar individual.

Candy Ride has two stakes winners from Tapit mares and he has three more stakes-placed runners on this exact cross, including GISP Dolder Grand.

WICKED LICK (m, 8, Maclean's Music – Here Music, by Dehere) to be bred to Not This Time

This mare will foal our second Authentic foal in 2022 and then will be visiting Not This time. This is a really good match physically. Not This Time can pretty this mare up. She has a great hip and hind leg and is good through her knees, but he can refine her head.

The Deputy Minister in her pedigree could be a plus as Not This Time is the sire of GISW Princess Noor and SW Next, who are out of daughters or granddaughters of Deputy Minister's son Awesome Again.