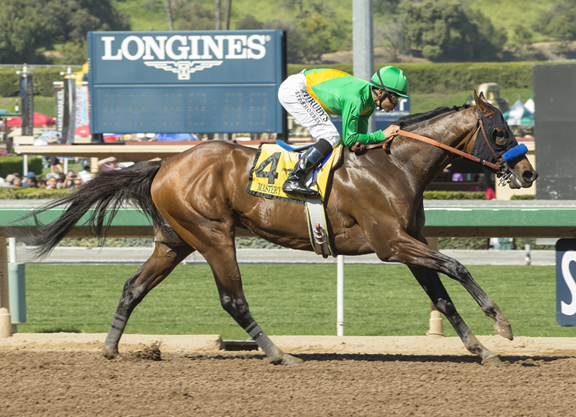 In a matter of moments, Saturday's GII San Felipe S. and the immediate aftermath epitomized the highs and lows of Thoroughbred racing. 'TDN Rising Star' Mastery (Candy Ride {Arg}) could not have been much more impressive romping away from talented GII San Vincente S. hero Iliad (Ghostzapper) in the stretch, but connections were never able to celebrate the victory. Hall of Famer Mike Smith quickly dismounted after the race.

“I felt it about 10 jumps after the wire,” Smith said shortly after Mastery walked into a horse ambulance under his own power. “All of a sudden he just picked up his back leg. At that point I couldn't tell what it was.”

Reports remained positive once Mastery returned to the barn, and assistant trainer Jimmy Barnes even phoned conditioner Bob Baffert to let him know that Everett Dobson's undefeated colt had walked off the van seemingly fine. But upon further examination, it was revealed that Mastery had suffered a condylar fracture to his left front that would require surgery and indefinite time off.

Hyped up for his six-panel unveiling here Oct. 22, Mastery ran to 3-10 odds to cruise to a convincing 4 1/4-length victory, good for a 93 Beyer Speed Figure. He doubled up in Del Mar's seven-furlong GIII Bob Hope S. Nov. 19, and took to two turns emphatically with a 7 1/4-length drubbing in the GI Los Alamitos Futurity Dec. 10, pairing up the 3 Thoro-Graph number he earned on debut.

Working up a storm over this strip, Mastery was crushed again in the wagering despite the presence of Iliad and Grade I winner Gormley (Malibu Moon), and the money proved spot on. Fastest into the first turn, Mastery seized a half-length advantage from a scrubbed-on Gormley with Iliad right off that one's right flank. Mastery's former stablemate Iliad loomed the only danger as he ranged up and tried to make a race of it past six panels in 1:10.48, but Mastery quickly shut the door required almost no encouragement from Smith to go about his business.

“The performance was just off the charts,” Baffert later said.

“He did it so easily. We were so excited, I didn't even watch [the gallop out]. When he hit the wire, I was thinking [2015 Triple Crown winner] American Pharoah (Pioneerof the Nile). That's the way he's been training. I really feel bad for Everett Dobson because we all saw they've been talking this horse up like he's the next coming and then that happens. It's tough, you know? But, he's going to be okay at least.”

When asked about treatment and prognosis for Mastery, Baffert offered,, “He will be healed up in 90 days, but right now we can't even think that far down. We are all so full of a disappointment that he got hurt after such a great performance, but we are very happy that he is going to be fine. Whatever he needs to get over this, he will have plenty of time. I'm just absorbing it as we speak. It's just tough. But what a performance.”

Arthur B. Hancock III of Stone Farm acquired Mastery's dam for just $20,000 at the 2009 Keeneland November sale in foal to Yes It's True and before the mare's first foal Clear Sailing would become a stakes winner. Hancock had had limited success with Steady Course in subsequent breeding seasons before Mastery caught the eye of agent Gatewood Bell at the 2015 Keeneland September sale and brought a solid price of $425,000. Steady Course produced a First Samurai colt last term, but was unsuccessfully bred to Twirling Candy after that. Mastery's second dam is MGSP Steady Cat, who was responsible for GSW and sire Jump Start (A.P. Indy). He hails from the extended female family of Miswaki.