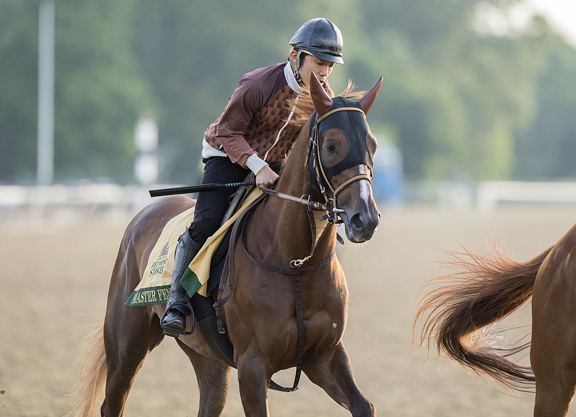 Master Fencer (Jpn) (Just a Way {Jpn}), promoted to sixth in the GI Kentucky Derby before running on well to finish a close fifth in the GI Belmont S. June 8, will remain in New York and will target the 10-furlong GI Belmont Derby July 6. The chestnut colt was originally scheduled to depart for Japan Thursday, but owner/breeder Katsumi Yoshizawa decided to shift gears Wednesday.

Although six of Master Fencer's eight career outings have come on the main track, he made his first two appearances on the turf, including a sound runner-up effort in a 2000-meter maiden on Hanshin debut last September (see below, gate 2). He was a close fourth at Chukyo second time out (video, gate 3) before graduating in his first start on the main track in late December.

“We're excited for the challenge of the Belmont Derby,” said Yoshizawa via translator Mitsuoki Numamoto. “Master Fencer has come out of the Belmont with good energy. He has raced twice on the turf in Japan and run well even though he did not win. I'm confident he will give a positive showing in the Belmont Derby on grass.”

There will also be Japanese representation in the GI Belmont Oaks Invitational, the first leg of the Turf Tiara, in the form of the Northern Farm-bred Jodie (Jpn) (Daiwa Major {Jpn}). A two-time winner as a juvenile, including a debut success in a newcomers' event at Tokyo, the bay was third in this year's G3 Daily Hai Queen Cup (1600m) in February (video, gate 4) and again in the G2 Sankei Sports Sho Flora S. (2000m) in April (video, gate 9), but was well down the field after setting the pace in the G1 Yushun Himba (2400m) May 19.

Click here for additional information on the Turf Triple Series.