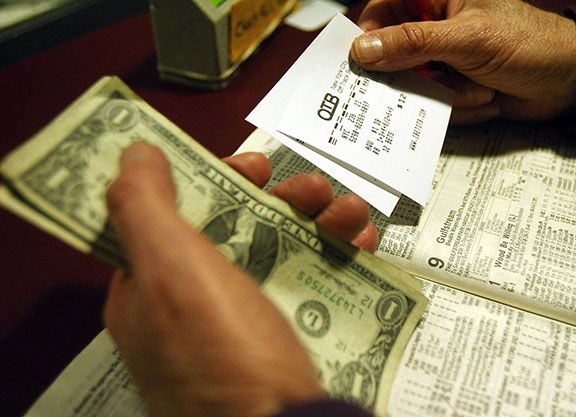 A $9-per-hour mutuels employee at an off-track-betting (OTB) sports bar in rural Maine amassed new vehicles, property, and told his boss the showy expenditures were paid for by a “trust fund” before the owner of the Favorites OTB parlor figured out the worker had allegedly embezzled $696,000 over a 3 1/2-year span.

The dollar amount of the alleged theft is staggering considering the woodsy, college-town location of the OTB in Waterville, which has a population of about 15,000 in the central part of the state. It's also noteworthy that no criminal charges have been filed, and that the owner of Favorites is instead seeking to get the money back via a civil lawsuit.

The Kennebec Journal first broke the story last week that Michael Tardiff Sr., 50, was sued in September by Pioneer Gaming LLC, which owns Favorites. A judge recently approved an attachment of $696,000 on Tardiff's property, but the plaintiffs have only been able to secure “a pretty modest amount of money” to date. Tardiff, though his attorney, has denied the thievery. He has been terminated from his Favorites job.

The owner of Pioneer Gaming is Don Barberino, who is known in the racing industry as the former marketing director and interim operations manager for Autotote Enterprises, which ran the OTB network in Connecticut until 2010. Prior to his time with Autotote, Barberino wrote racing columns for various news outlets and worked in the public relations department of the New York Racing Association. He bought Favorites in 2011.

The alleged mutuels theft in Maine is believed to be the largest reported “inside job” since the notorious 2002 Breeders' Cup scandal, in which an Autotote computer programmer rigged Pick Six tickets to steal some $3 million. That Autotote employee and two ticket-cashing accomplices pled guilty, had to give up the money, and were sentenced to stints in federal prison.

It was later alleged in court documents that Tardiff often waited until the business had closed in the evenings to use a former employee's login password to “print off a betting voucher receipt for either $1,415 or $2,380, or $5,660 without paying cash into the system.” The lawsuit alleges that Tardiff then later either placed bets with the vouchers or simply cashed them in. @thorntontd