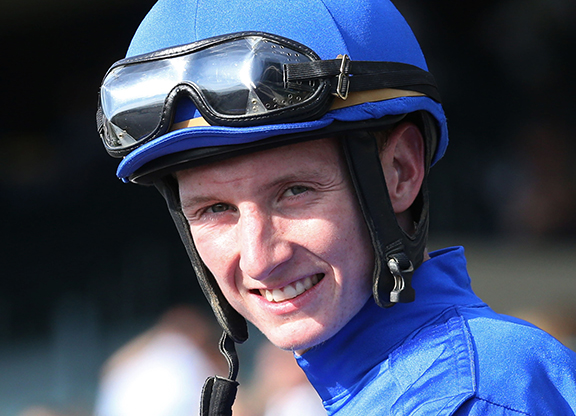 Sixteen months after a widely criticized rule forcing the pari-mutuel coupling of married jockeys cost an estimated $4.2 million in handle loss at Aqueduct Racetrack, the New York State Gaming Commission (NYSGC) on Wednesday finally voted in a rule change that resolved a bureaucratic logjam by changing four words in a regulation that is about 50 years old.

So after nearly a year and a half of the rule resulting in truncated field sizes, being widely bemoaned by the betting public, and being termed as sexist by critics because it dated to an era when women jockeys were unfairly regarded with unfounded suspicion, all it took was deleting the word “shall” from rule 4025.10 (f) and replacing it with a phrase stating that married jockeys “are not required” to be coupled when they compete in the same race.

But just in case there is any remaining whiff of impropriety that husbands and wives riding in the same race might collude to fix an outcome, the commission left the door open for the NYSGC steward to use his or her best judgment in determining whether the bettors still need to be protected.

By purposely using the phrase “are not required” instead of an outright “shall not,” this means that “the Commission steward would retain the discretion to require coupling in any circumstances in which such steward concludes coupling is necessary in the public interest,” according to a brief written by NYSGC general counsel Edmund Burns.

The unanimous voice vote during the June 29 meeting came after zero public discussion on the matter among the tight-lipped commissioners, who have maintained a steadfast silence on the issue since it surfaced unexpectedly at the start of 2021.

Although the couple had ridden against each other numerous times while dating, when Davis and McCarthy began competing in common races as spouses at Aqueduct, it triggered the application of little-used rule 4025.10 (f), which at the time stated, “All horses trained or ridden by a spouse, parent, issue or member of a jockey's household shall be coupled in the betting with any horse ridden by such jockey.”

So on 41 occasions between Jan. 1 and Mar. 21, 2021, that meant McCarthy and Davis's mounts in common races at Aqueduct necessitated a 1 and 1A coupling. TDN arrived at the $4.2 million estimate of lost betting handle by multiplying Aqueduct's winter/spring per-entrant handle of $103,000 by 41.

The application of the rule caused confusion among bettors, and it resulted in reams of bad press for Aqueduct (whose officials stated there was nothing they could do to change the regulation) and the NYSGC (whose commissioners did not articulate their views on the controversy during any open, public meetings).

By February 2021, Davis was claiming that Aqueduct racing office workers were pressuring trainers into not naming her on mounts so that field sizes would not be reduced, an allegation that a track spokesperson denied at the time. She switched to accepting mounts in Maryland in April while McCarthy continued to ride in New York.

In May 2021, Davis announced that she and McCarthy were expecting a child, and she stopped riding in races. The couple then relocated to Southern California, but returned to New York last November after McCarthy's mounts out West went 9-for-156 and he hurt an ankle that required three months off to heal from surgery. Davis gave birth to a daughter Dec. 21.

McCarthy was second in both wins and earnings at the winter Aqueduct meet and is currently ninth in both categories in the Belmont Park standings.

Meanwhile, as Davis and McCarthy were crisscrossing the country in the middle of a pandemic in order to figure out where they could best settle as a family, a piece of legislation to update New York's antiquated married coupling rule sailed unanimously through both the Assembly and Senate last summer and fall.

But on Oct. 25, 2021, that bill was surprisingly vetoed by New York Governor Kathy Hochul, who instead directed the NYSGC to review the “continued need for mandatory coupling and the circumstances under which such a requirement might be relaxed.”

That directive resulted in a Jan. 11, 2022, pow-wow of Thoroughbred industry stakeholders, regulators, and track officials, during which not a single person advocated in favor of keeping the antiquated rule as it had been written.

But married jockeys weren't the only entities affected by Wednesday's rulemaking.

With the same vote, the NYSCG also changed rule 4040.2 so it keeps intact a provision that states, “No jockey, nor such jockey's spouse, parent, issue nor member of such jockey's household, shall be the owner of any race horse,” while deleting a following sentence that had stated, “All horses trained or ridden by a spouse, parent, issue or member of a jockey's household shall be coupled in the betting with any horse ridden by such jockey.”

So if a trainer enters a horse and their son or daughter rides a different mount in the same race, those two horses won't be coupled in the betting.

During the public commentary period after the NYSGC first proposed the rule changes on Feb. 28, 2022, both the New York Racing Association and the New York Thoroughbred Breeders, Inc., stated support for the two rule re-wordings.

But according to materials provided in the meeting packet, the New York Thoroughbred Horsemen's Association (NYTHA), while also expressing support, suggested that the commission amend rule 4025.10 (f) even further, so it would read:

“All horses trained or ridden by a spouse, parent, issue or member of a jockey's or trainer's household are not required to be coupled in the betting with any horse ridden by such jockey or any horse trained by such trainer.”

The purpose of the additional language (which did not make the final version voted in by the NYSGC), was because NYTHA objected to a coupling of entries when a trainer trains two horses in a race, one of which is owned by the trainer's spouse.

Trainer H. James Bond and his wife, Tina Marie Bond, who is a Thoroughbred owner with horses conditioned by her husband, also wrote in with concerns about that same subject.

According to the NYSGC meeting materials, Mrs. Bond “submitted a comment objecting to the coupling of horses of hers with horses of unrelated owners when the coupled horses were both trained by her husband.”

But, the NYSGC added, “Her comment did not address the elimination of mandatory coupling when persons related to jockeys are involved in the same race.”

And Mr. Bond, according to the NYSGC, “stated that 'this rule of coupling will be detrimental to my business as a public trainer,' but did not explain how or why.”

A 15-line “staff response” was printed just beneath the Bonds' comments within the meeting materials packet, but NYSGC officials felt the need to black it out so it was redacted from public view.