Mark Casse Displays Perfect Record With Juveniles So Far in 2022 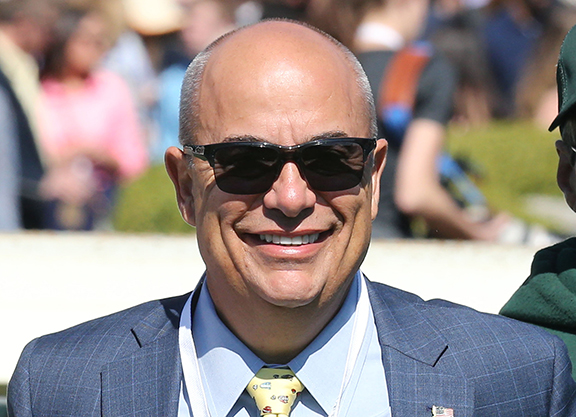 That Mark Casse won a pair of 2-year-old maiden races Sunday at Woodbine should not have come as a surprise. The trainer hasn't just been hot when it comes to his juvenile runners, he's been perfect. Casse has sent out eight 2-year-olds so far this year and all eight have won.

Six were first-time starters and two others won in their second career starts. He leads all trainers in the category of 2-year-old winners on the year. Steve Asmussen is next with six.

How has Casse done it?

“For one thing, we have a bunch of good 2-year-olds,” he said. “That has not ever been my agenda, to win first time out. All those winners have come off our training center in Ocala and I'm proud of that. That's where I spend a lot of my time. We crank them up at the farm a little more. Those horses have been breezing halves and five-eighths going out of the gate. Our training center is almost like a racetrack, so it doesn't take us long to get them ready.”

Casse added that when it comes to his current crop of 2-year-olds, he was more hands on when they were purchased at sales compared to how he had been in prior years when he relied heavily on agents to send him horses.

“I kind of stepped away for a while and had stopped buying,” he said. “I was going more by the agents. We still train a lot of horses that agents bought. But with this crop, especially, my wife, Tina and I, were pretty involved with it. Nothing was bought without us approving them. Len Green (owner of DJ Stable) said that if you are going to ask a guy to cook it helps if he gets to buy the ingredients.”

It's also notable that Casse didn't exactly break the bank when purchasing the eight. The highest price paid for any among the group was $450,000 and two sold for less than $100,000.

A look at Casse's elite eight:

Adora (Into Mischief): Owned by Tracy Farmer, she broke her maiden on May 14 at Woodbine, winning by 4 3/4 lengths. She cost $450,000 at the Fasig-Tipton Saratoga sale. She is being pointed for the GIII Schuylerville S. on July 14 at Saratoga.

“With Adora, we paid $450,000, more than you'd normally see us pay,” Casse said. “But she has built-in value. A filly like her, if she goes on and is successful she's worth millions of dollars. If you see us paying that kind of money there is usually some residual there.”

Boppy O (Bolt d'Oro): Owned by John C. Oxley and Breeze Easy, LLC, he broke his maiden on May 20 at Gulfstream. He cost $190,000 at Keeneland September and is a half-brother to the Casse-trained Pappacap (Gun Runner), the runner-up in last year's GI Breeders' Cup Juvenile.

Stayhonor Goodside (Honor Code): Named by TDN Writers' Room superfan Skip Anderson, who submitted the winning entry in a TDN name the foal contest. He won a May 21 maiden at Woodbine by 5 1/2 lengths and is being pointed to the July 4 GIII Bashford Manor S. at Churchill Downs. Sold for $85,000 at Keeneland September.

Me and My Shadow (Violence): The filly won a May 28 maiden at Woodbine and is owned by DJ Stable. Cost $185,000 at Keeneland September. Is also being pointed for the GIII Schuylerville.

Ninetyfour Expos (Outwork): After running third in his debut on May 1, won a May 29 maiden at Woodbine by 8 1/4 lengths. Sold for $80,000 at the Fasig-Tipton Kentucky Select Yearling Sale.

Wonder Wheel (Into Mischief): The filly is owned by DJ Stable and cost $275,000 at Keeneland September. She broke her maiden by 2 1/4 lengths when debuting June 3 at Churchill Downs.

“I had been telling the Greens for two, three months that she was something special,” Casse said.

Wonder Wheel is being pointed for the July 4 Debutante S. at Churchill.

Battle Strike (Connect): The Ontario-bred colt won a May 12 maiden at Woodbine by 6 1/4 lengths in his debut. Owned by Tracy Farmer, he cost $130,000 at Keeneland September. He will go next in the July 17 Victoria S. at Woodbine.

Cahira's Blessing (Maclean's Music): Owned by Epona Thoroughbreds, Inc, the filly finished third in her debut and then came back to win a June 12 maiden at Woodbine by 2 1/2 lengths. She will run next in the July 16 My Dear S. at Woodbine.

Casse will have one juvenile starter this weekend in Saturday's first at Gulfstream, and said he expects to unveil a number of other top prospects during the weeks ahead. He said he has about 55 2-year-olds in training.

“We just have a lot of good 2-year-olds this year,” he said. “I think if people took a look at our record with 2-year-olds over the years they'd be surprised by how well we've done. I have a really good crew in Ocala. Mitch Downs has worked for me for 40 years and I have seven or eight people who have worked for me for 30-plus years. I like to think that we are a well-oiled machine.”