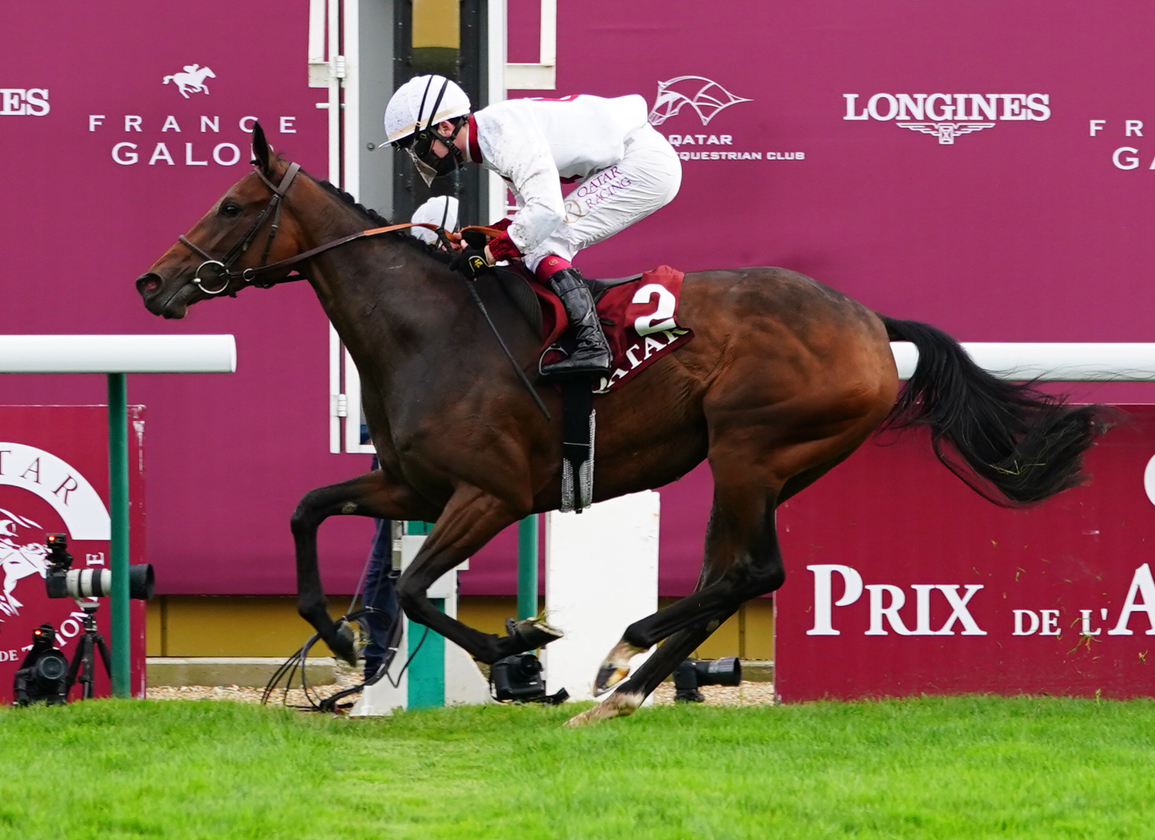 Sunday's G1 Qatar Prix Marcel Boussac which opened ParisLongchamp's Arc fixture took place without TDN Rising Star and likely favourite Raclette (GB) (Frankel {GB}) after Andre Fabre opted to wait for Friday's G3 Oh So Sharp S. due to an excess of 20 millimetres of rain falling pre-racing. How Juddmonte's unbeaten daughter of Emollient (Empire Maker) would have coped with the very soft ground is an unknown, but her stablemate Zellie (Fr) (Wootton Bassett {GB}) handled it with aplomb to deny the 33-1 shot Times Square (Fr) (Zarak {Fr}) in what appeared a grind in the conditions and book her trip to the GI Breeders' Cup Juvenile Fillies Turf at Del Mar in November.

Impressive in this ground when winning the seven-furlong Listed Prix Roland de Chambure at Deauville July 11, Al Wasmiyah Farm's acquisition was second to Oscula (Ire) (Galileo Gold {GB}) in the Aug. 3 G3 Prix Six Perfections over that same track and trip and to Fleur D'Iris (GB) (Shamardal) in the G3 Prix d'Aumale over this course and distance Sept. 9. Held up in rear early by Oisin Murphy, the 4-1 shot was sent up the inner to pass all rivals in the straight and overhaul Times Square 100 metres from the line en route to a 1 3/4-length success, with Oscula three lengths away in third. “She is a nice, uncomplicated filly who has been so consistent,” commented Fabre, whose juggling act here resulted in a second Marcel Boussac and first since 1995. “She is finished for the season and I don't think she'll go much further than a mile. It'll be either the 1000 Guineas or the Pouliches.”

Zellie, who was campaigned in the colours of Fabre's daughter Lavinia until being sold to Qatar's Ali Hamad Al Attiya prior to the Six Perfections, had also shown an aptitude for heavy going when off the mark over six furlongs on debut at Saint-Cloud May 18 but is no one-trick pony. Following up on good ground back there on her second start over seven June 8, the bay was on good-to-soft when charging late in the Prix d'Aumale and is just an admirably versatile and honest performer with the touch of class necessary to lift a prize such as this. As fellow Fabre runner and 11-5 favourite Fleur D'Iris and the G3 Silver Flash S. and G2 Debutante S. winner Agartha (Ire) (Caravaggio) caved in having animated the race from the outset, it was a case of who had the strength in the finale and the winner lacks for nothing in that department.

Oisin Murphy said, “She prefers good ground, but has enough class to cope with this ground on the day. She is trained by an extraordinary man. Thank you very much to the owners and to Mr Fabre for the confidence placed in me. She is a beautiful, easy-to-ride filly and she has a big heart. She is a dream ride for a jockey!”

Times Square's trainer Christophe Ferland said of the runner-up, “She is a nice filly who has been very difficult to train. She has a lot of temperament and is not easy to be around, so my team have done a great job working with her. She worked very nicely 10 days ago and although the odds said we had no chance, I believed. She was beaten by a better horse on the day, but at least we have a nice filly for next season.”

Emulating the career-best success of her burgeoning sire presence, whose big day came in the G1 Prix Jean-Luc Lagardere on this card on the same ground in 2010, Zellie is the second foal and first runner out of Sarai (GB) (Nathaniel {Ire}) who is kin to three stakes winners. They are headed by Speciosa (Ire) (Danehill Dancer {Ire}), who won a soft-ground G1 1000 Guineas as well as the G2 Rockfel S. and G3 Nell Gwyn S., and include the GIII Stars and Stripes Breeders' Cup Turf H. scorer Major Rhythm (Rhythm). Two of the less-accomplished half-siblings Bold Classic (Pembroke) and Gadfly (GB) (Galileo {Ire}) are responsible for the G1 Irish Derby third Festive Cheer (Fr) (Montjeu {Ire}) and this year's G3 Prestige S. winner Mise En Scene (GB) (Siyouni {Fr}) respectively.