Mandaloun Turns Tables with Addition of Blinkers in Risen Star 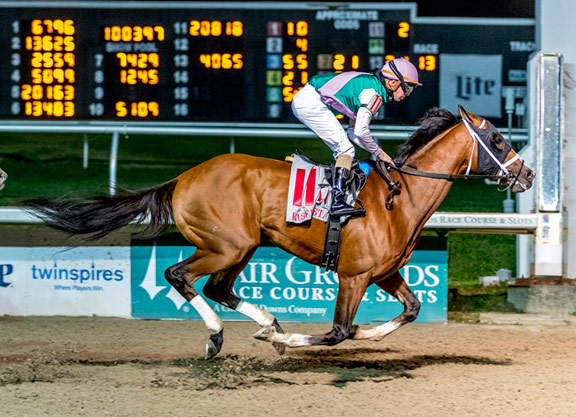 Mandaloun added yet another feather to his superstar sire Into Mischief's cap with a victory in Saturday's GII Risen Star S. at the Fair Grounds. Adding blinkers after a third-place finish in the GIII Lecomte S. last time, the Juddmonte Farms homebred was away alertly from stall 10 and rushed up to stalk from a two-wide third as Rightandjust (Awesome Again) was pressed along by Midnight Bourbon (Tiznow) through early fractions of :23.65 and :48.45. Midnight Bourbon stuck hi head in front entering the bend with Mandaloun roaring up on his outside and Proxy (Tapit) outside of him. Running three-wide, Mandoulon overtook Midnight Bourbon in mid-stretch and charged clear with determined strides to win by 1 1/4 lengths. Proxy pushed past Midnight Bourbon late to be second.

“He's had two great works since so we expected him to move forward,” Cox said. “I think the blinkers did help out. Florent [Geroux] immediately made a comment after the race. Much more focused in the post parade, more focused on his job. We didn't put a bunch of cup on him, just like a one-inch cup, but it seems to have done the trick to get him mentally where he needs to be.”

As for what's next, Cox said, “The [the GII Louisiana Derby] is definitely going to be in play. We will talk it over with Garrett O'Rourke and the Juddmonte team and come up with a game plan. I'm very proud of the colt. He stepped up and ran a big race today. That [nine furlongs] is a big ask at any time for a Thoroughbred, and then to do it in February of your 3-year-old year. Garrett has made the comment several times that he thinks he's a mile-and-a-quarter-horse and he trains like one. He's got the physical make-up of a mile-and-a-quarter horse so we're optimistic he'll get better with more ground.”

Closing strongly to capture his career bow going six furlongs at Keeneland Oct. 24, Mandaloun cleared his first-level allowance condition going a furlong further at Churchill Downs Nov. 28. He completed the trifecta behind Midnight Bourbon last time in this venue's Lecomte S. Jan. 16 and prepped for this with a best-of-35 five panels in :59 4/5 in NOLA Feb. 6.

Mandaloun is the 37th graded scorer and 87th black-type winner for the mighty Into Mischief. He is also the 24th graded victor and 52nd black-type winner out of a daughter of the late Empire Maker. The Juddmonte colors were also carried to victory Saturday at Gulfstream by another Into Mischief colt out of an Empire Maker mare in good-looking graduate Floriform. Mandaloun is a fourth-generation homebred for the late Juddmonte principal Prince Khalid Bin Abdullah. His operation purchased his fourth dam Queen of Song (His Majesty) for $700,000 in foal to Seattle Slew at Keeneland November back in 1989. Mandaloun's dam Brooch is a two-time group winner in Europe and a half-sister to MSW & MGSP Caponata (Selkirk). He is her second foal and the 10-year-old mare has since produced a pair of colts by Into Mischief. She was bred back to War Front last spring. This is also the family of Irish Highweight Emulous (GB) (Dansili {GB}) and Group victor First Sitting (GB) (Dansili {GB}).