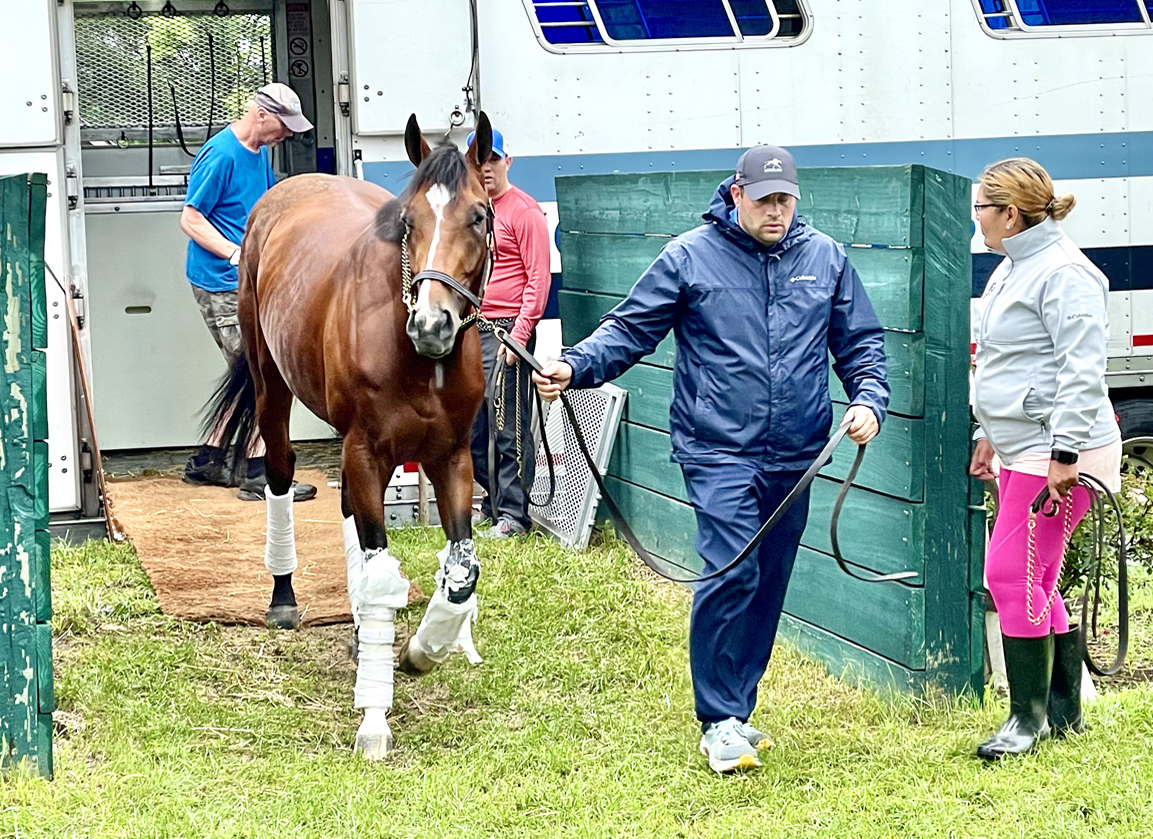 SARATOGA SPRINGS, NY–Shortly after GI TVG.com Haskell S. winner Mandaloun (Into Mischief) arrived at his barn at 10 a.m. Sunday morning following his trip north from Monmouth Park, trainer Brad Cox said it was too early to say what will be the next test for the Juddmonte homebred.

Technically, the Haskell is Mandaloun's first Grade I victory. However, it is quite possible that he may be placed first in the GI Kentucky Derby. Mandaloun finished second in the Derby to Medina Spirit, who could be disqualified for testing positive for a medication that must be out of a horse's system on race day. The Kentucky Horse Racing Commission has yet to hold a hearing on Medina Spirit's Derby post-race positive for the corticosteroid betamethasone.

Cox said he liked what he saw of Mandaloun following his approximately four-hour van ride from the Jersey Shore to upstate New York.

Cox has Godolphin's GI Belmont S. winner Essential Quality (Tapit) pointed to Saratoga's marquee race, the $1.25-million GI Runhappy Travers S. Aug. 28. Essential Quality is scheduled run in the GII Jim Dandy S., the local Travers prep, on July 31. While Cox said that it is possible that Mandaloun could be in the Travers, too, the colt's schedule will be shaped in discussions with Garrett O'Rourke, manager of Juddmonte's U.S. division. The GI Pennsylvania Derby Sept. 25 at Parx is another option.

“We already decided that we were going to ship him up here,” Cox said. “Let him kind of catch his breath. Let us catch our breath. More importantly, him, and just kind of watch him over the next few weeks and then come up with a plan. Moving forward, I think we've just kind of decided the two logical spots would be the Travers and the PA Derby.”

Mandaloun will follow Cox's typical pattern for horses between races. His first work back will be easy, regardless of what race is next. Meanwhile, Cox and O'Rourke will monitor what is taking place in the 3-year-old male division.

“We'll see how he trains and if he moves forward off this Haskell and what unfolds in the Jim Dandy. How that plays out. How that race looks,” Cox said. “They have the Curlin that weekend, as well. That could play a role in what happens in the Travers. We'll watch what everyone else is doing and what Essential Quality is doing, how each horse is training and make a decision down the road.”

Under Florent Geroux, Mandaloun sat an inside trip a bit off the pace in the Haskell and moved into contention on the second turn. In the stretch, Geroux took Mandaloun between tiring pacesetter Following Sea (Runhappy) on the rail and Midnight Bourbon. Hot Rod Charlie and Flavien Prat came wide to get to the lead before drifting in front of Midnight Bourbon. Lopez and the colt escaped serious injury.

Mandaloun battled on through the stretch with Hot Rod Charlie, who managed to prevail by inches at the wire.

“Watching the race live, I thought he ran a fantastic race. He got a great trip,” Cox said. “I thought he got a very similar trip to what he got into Kentucky Derby. We talked about that. We thought that might be the trip we need in order to win the race. Once again, two horses came to the wire together. Both of them ran winning races. I thought, turning for home, we had a big shot. Hot Rod Charlie got away from us a little bit. Then we were battling back.”

Cox acknowledged that he was a bit frustrated that Mandaloun's victory in the Haskell and, perhaps a Derby win, will be via the disqualification of another horse.

“This was a little better, obviously, than the Derby thing, because it's not been resolved yet,” Cox said. “You'd like to cross the wire first, but yesterday he was right there, so it was a little different story.”

Cox reiterated the point that Mandaloun turned in a strong performance in the Haskell.

The victory in the 'Win and You're In' Haskell provided Mandaloun with a guaranteed berth in the GI Longines Breeders' Cup Classic as well as all-important Grade I victory. Cox said that success at Monmouth will allow the colt's connections the opportunity to try to pick the best route to Del Mar and the Breeders' Cup.

“Hot Rod Charlie is one of the top contenders in the division. It would be nice to run in a Grade I before the Breeders' Cup and maybe not have to tackle him again,” Cox said. “You just want to put them in where they could possibly have a nice race prior to the Breeders' Cup, without it being extremely taxing on them. I'm not saying give them a race, but where they're not really laying it down.”

Trainer Steve Asmussen reported that Midnight Bourbon appears to have sustained only minor injuries from his near fall.

“Everything X-rayed well on Midnight Bourbon today,” Asmussen said. “Hoping all is superficial.”

“They did X-rays rays on him and jogged him this morning,” added David Fiske, the stable's longtime general manager. “The X-rays were no different than what they showed before the race and he seems to be jogging better today than he was yesterday. Everybody's got their fingers crossed that nothing pops up in the next few days or so. We'll watch him and wait and see. It's a little early to make any kind of plans for him.”