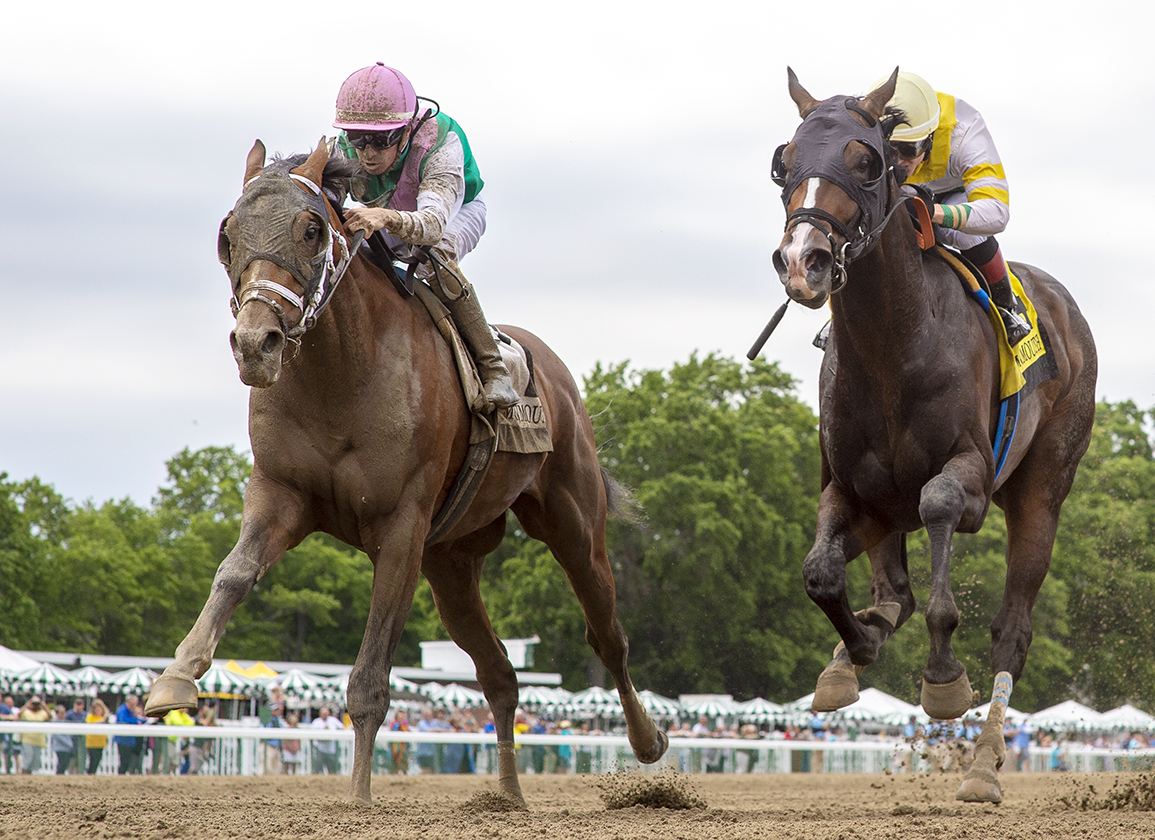 Juddmonte Farms' Mandaloun (Into Mischief), who may yet be named this year's GI Kentucky Derby winner should Medina Spirit (Protonico) be disqualified, held off a determined Weyburn (Pioneerof the Nile) to kick off the second half of his sophomore campaign with a win in the TVG.com Pegasus S. at Monmouth Park Sunday.

Sent off the 1-5 favorite while facing just four rivals, Mandaloun was squeezed back to last soon after the break and trailed the compact field as longshot Lugamo (Chitu) set a leisurely pace up front with Weyburn a threatening presence to his outside. Weyburn, upset winner of the GIII Gotham S. in March, took command on the far turn, but Mandaloun was making progress of his own under energetic handling from jockey Florent Geroux. The bay colt charged into the lane with a three-wide move and, despite being floated out farther on the track as Weyburn drifted at the top of the stretch, looked set to power clear to an easy victory. But he seemed to idle in deep stretch as Weyburn re-rallied to just miss catching the favorite in the final jumps.

“We didn't expect that [being pinched at the start],” said winning trainer Brad Cox. “We thought he might be on the lead or tracking a couple. We found ourselves last going into the first turn. But overall it was a big effort. I think he closed into a soft pace. He probably had to start his run a touch early given the fact that he was last. He ran a big race. Florent made the comment that he may have been looking around late. But he made the lead by himself. Overall it was a good effort for him to ship over here.”

Geroux added, “He was nice and relaxed during the race. It was nice to see that he was able to settle down on his and everything worked out great. The important thing was not to rush him too hard [after the start]. I had a lot of horse. He was passing horses one by one.”

“At the end when he made the lead maybe he was looking around a little,” Geroux said. “It was a new thing for him not having the whip for encouragement. I saw the other horse [Weyburn] coming inside of us. But he was still running pretty good at the end. He had to work for it but I don't think it was a really hard race on him. He did not come back blowing hard at all.”

Mandaloun came up just a half-length short when second behind Medina Spirit in the May 1 GI Kentucky Derby, but the results of that race remain in limbo following the first-place finisher's subsequent betamethasone positive.

The Juddmonte homebred was tabbed a 'TDN Rising Star' following his debut win at Keeneland last October and concluded his two-for-two juvenile campaign with an optional-claimer victory at Churchill Downs in November. He opened 2021 with a third-place effort as the 7-5 favorite in the Jan 16 GIII Lecomte S. and rebounded with a win in the Feb. 13 GII Risen Star S. He was a 26-1 longshot in the Derby off a dull sixth-place effort in the Mar.20 GII Louisiana Derby.

Mandaloun could be making a return trip to the Jersey Shore for the July 17 GI TVG.com Haskell S.

“I think ultimately we're going to figure out what toll it took on him once we get back home [to Churchill Downs],” Cox said of future plans for Mandaloun. “The ship over for the race, the ship back, things such as that. We'll put it all together and process it and let him tell us where he is over the next couple of weeks. It was a good effort and hopefully he can bounce out of it in good order and be ready in five weeks [for the Haskell].”

Pedigree Notes:
Mandaloun is a fourth-generation homebred for the late Juddmonte principal Prince Khalid Bin Abdullah. Juddmonte purchased his fourth dam Queen of Song (His Majesty) for $700,000 in foal to Seattle Slew at Keeneland November back in 1989. Mandaloun's dam Brooch is a two-time group winner in Europe and a half-sister to MSW & MGSP Caponata (Selkirk). The 10-year-old mare has a yearling full-brother to Mandaloun and produced a colt by War Front this year. This is also the family of Irish Highweight Emulous (GB) (Dansili {GB}) and group winner First Sitting (GB) (Dansili {GB}).