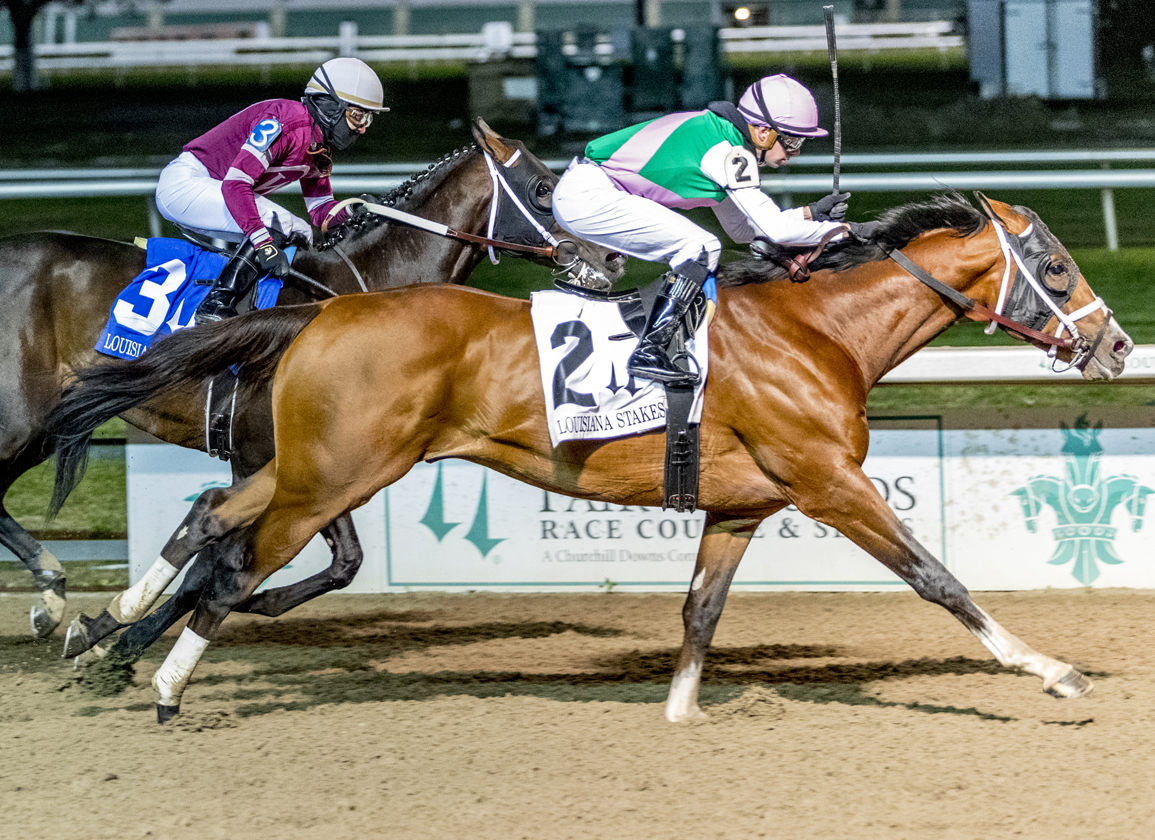 They engaged in as good a battle on the infield tote as they did on the track, but at the end of the 8 1/2 furlongs of Satuday's GIII Louisiana S. at the Fair Grounds, and in what looked to be a two-horse race proved exactly that, as 9-10 favorite and 'TDN Rising Star' Mandaloun outbattled an alibi-free 6-5 second choice Midnight Bourbon (Tiznow) to make a victorious return to the races.

Midnight Bourbon, last seen finishing third as the favorite to Maxfield (Street Sense) in the GI Clark S. at Churchill in November, hit the ground running and had the superior early foot, as Mandaloun–whose last trip to the races resulted in a promoted victory in the GI TVG.com Haskell S. last July–was content to take a trail and skim the rail from third after the scratch of the GI Pegasus World Cup-bound Chess Chief (Into Mischief) left him with the inside stall.

The pace was moderate for horses of this quality–the quarter was in :24.39 and the half in :48.25–and Mandaloun edged into second as they raced into the final 3 1/2 furlongs. Poised to strike at the five-sixteenths, Mandaloun was floated a bit wide by Joel Rosario and Midnight Bourbon, but the Juddmonte homebred was in for the fight. He engaged the pacesetter in earnest at the eighth pole and methodically wore that one down to take it by a measured 3/4 of a length. It was a distance back to Warrant (Constitution) in third.

It was on this program a year ago that Midnight Bourbon defeated Mandaloun into third in the GIII Lecomte S. before reversing form with a 1 1/4-length conquest in the GII Risen Star S. An inexplicable sixth–with Midnight Bourbon second to Hot Rod Charlie (Oxbow) in the GII Louisiana Derby, Mandaloun ran an enormous race to miss by a half-length in the GI Kentucky Derby. Connections elected to give the rest of the Triple Crown a miss and Mandaloun narrowly won the June 13 Pegasus S. before being put up to the win in the Haskell in the incident which saw Midnight Bourbon nearly go down when interfered with by Hot Rod Charlie.

Winning trainer Brad Cox confirmed that a start in next month's G1 Saudi Cup over a one-turn mile and an eighth would be under serious consideration for Mandaloun.

Mandaloun is one of 46 graded winners for his leading stallion and is bred on the cross over Unbridled or Unbridled-line mares responsible for the likes of dual Eclipse Award and multiple Grade I winner Covfefe, other graded winners Private Mission, Largent, fellow 'Rising Star' Maximus Mischief and recent GIII Sugar Swirl S. winner Center Aisle and the ill-fated 'Rising Star' Taraz.

Mandaloun is one of two winners from as many to race from his dam, a winner at Group 2 and Group 3 level in Ireland for Dermot Weld and a half-sister to MSW & MGSP Caponata (Selkirk) and MGSP Raymonda (Lonhro {Aus}).

Mandaloun is one of 29 'Rising Stars' for the outstanding Into Mischief, a number that also includes New York stallion Honest Mischief, who–interestingly–is out of Empire Maker's GISW half-sister Honest Lady (Seattle Slew).

Brooch is the dam of Mandaloun's 2-year-old full-brother Mullion, a yearling colt by War Front and was most recently covered once again by Into Mischief.