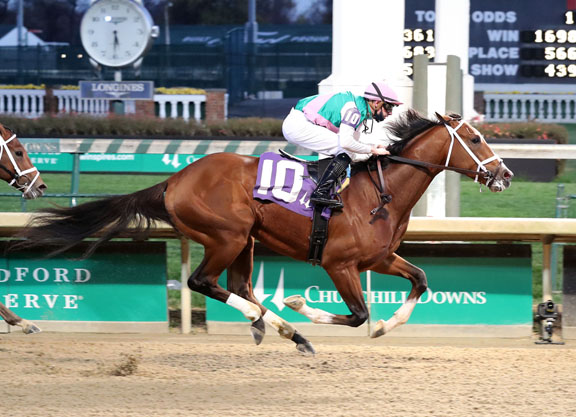 Earning Rising Star status first time out going six panels at Keeneland last October, the bay followed up with another solid win while adding an additional furlong in a Churchill Downs optional claimer the following month. Heavily supported for his seasonal reappearance in the Jan. 16 GIII Lecomte S. in New Orleans, he had to settle for third, beaten two lengths, behind the re-opposing Midnight Bourbon (Tiznow) and Proxy (Tapit), a length behind the winner. For his latest success in the nine-furlong Risen Star, the colt was fitted with blinkers for the first time, a move which likely helped move the colt forward, according to Brad Cox. As in the Lecomte, Proxy finished behind the winner.

“He got a lot out of the Lecomte and I think the blinkers propelled him forward as well in his second start [of the season],” explained Cox. “He got a lot out of his first two races, but the first time going two turns in the Lecomte, you can train as much as you want but there is nothing like the experience of going two turns. He also just got more experience. It was only the fourth start of his career. He is very accomplished horse with only four starts.”

Asked about the timeline in the run-up to the First Saturday in May, Cox said, “It was four weeks back to the Risen Star off the Lecomte. He is five weeks now to the Louisiana Derby, and if all goes well, we'll have six weeks to the [May 1] Kentucky Derby. He has continued to move forward in every start. I'm good with the six weeks in between [the Louisiana and Kentucky Derbies], because he's a good work horse because he gives you what you need in the morning. At the end of the day, I think he's cut out to be a mile-and-a-half horse with the Empire Maker on the bottom side. I am very confident we can show up and do what we need to do [in the Louisiana Derby]. Hopefully, we can move forward to the Kentucky Derby.”

Hoping to repeat his winning effort in the Lecomte, Midnight Bourbon, who drew one outside of Mandaloun in the seven-hole, will be reunited with Joe Talamo, aboard for the Winchell Thoroughbreds runner's two latest starts, including his Risen Star third.

“In the Lecomte we had a really good trip and got out to a pretty easy lead that day and were able to wire them,” recalled Talamo. “Last time, even when Mandaloun and Proxy went by, if you watch that race again, he was kind of coming on again in the gallop out. I think the added distance [of the Louisiana Derby] is only going to help him.”

Asked how he expects Saturday's race to unfold, Talamo said, “The race looks like it can almost be the exact same setup as the Risen Star. Rightandjust [Awesome Again] is a quick horse and I'm sure he's going to be in front, and unless something happens and nobody goes to the front, I'll go up and take it. If not, I'll be content to just track him.”

He continued, “I also really love his post because, if somebody goes out there, he is content to settle in second or third, too. Hopefully, we can just get a good trip. I think it'll be one of those races that, whoever gets the right trip, and from the quarter-pole home, we'll see who is the best. I really think the trip is going to suit Midnight Bourbon.”

A winner second time out going a mile at Ellis last August, the $525,000 KEESEP yearling purchase was runner-up in Churchill's GIII Iroquois S. before rounding out 2020 with a third in the GI Champagne S. Oct. 10.

“He's a big horse, but very athletic,” said Talamo. “Normally, a horse like that, it takes him a stride or two to get going. It's really amazing how good of a gate horse he is. He breaks very sharp for a horse that big. He's really smooth to ride. And he's one of those horses that you just try to be a good passenger and let him do the rest.”