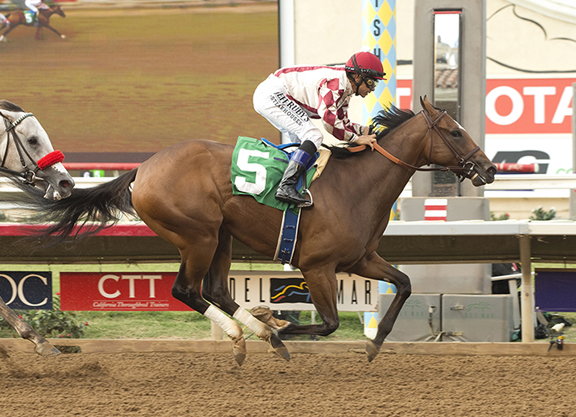 The Simon Callaghan barn is very well-stocked these days, and it unveiled another promising runner on the GI Pacific Classic S. undercard Saturday in the form of juvenile filly Moonshine Memories (Malibu Moon), who was named a 'TDN Rising Star'. Given a 37-10 chance off a fairly unassuming worktab, the $650,000 Fasig-Tipton Saratoga grad broke a half-step slow but quickly burst through horses to grab the lead. Challenged from her inside through an opening quarter in :21.88, she was joined on her right flank by odds-on Tyfosha (Flatter) exiting the bend. Going better–and straighter–than that foe as they pulled far clear of the rest of the field, she was a length in front of her main rival at the wire while stopping the timer in 1:10.08 and galloping out all by herself. Tyfosha was 11 1/2 lengths clear of fellow Doug O'Neill pupil Dr. Ann (Eskendereya) in third. While she hasn't broken through yet, Tyfosha seems to be a good barometer for other runners in this division. The $410,000 OBSMAR grad was second at 1-2 on debut behind subsequent Landaluce S. romper Surrender Now (Morning Line), and filled the same slot behind 'Rising Star' Just a Smidge (Into Mischief) on opening day here July 19. Moonshine Memories is a half-sibling to precocious Indian Evening (Indian Charlie), SW & GSP, $140,172, who sired this year's very speedy Northern California-based stakes-winning juvenile Kimberlea K. Unenchantedevening, a half to 1997's champion 2-year-old and Horse of the Year Favorite Trick (Phone Trick), produced a filly by Distorted Humor in 2016 followed by a colt by Honor Code this term. She was bred back to Malibu Moon.