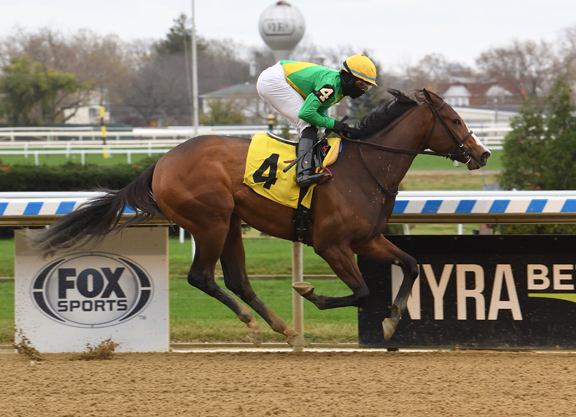 Cheyenne Stables LLC's Harper's in Charge (Malibu Moon) ran to advanced billing to post an extremely easy debut victory worthy of the 'TDN Rising Star' distinction. Pounded all the way down to 7-5 off an 8-1 morning line, the $220,000 KEESEP yearling zipped out of the gate and was immediately a length in front. She cruised along through splits of 22.83 and :46.84, and continued into the lane in complete command as Manny Franco peeked back for competition. Nobody could run with the leader, and she hit another gear for good measure in midstretch while running up the score to 6 1/2 lengths. Chad Brown/Klaravich firster Commandandcontrol (Quality Road) was second best.

The winner's unraced dam Azara (More Than Ready) is a half-sister to superstar Tepin (Bernstein) and MGSW Vyjack (Into Mischief). She sold for $875,000 in foal to Into Mischief at KEENOV '16. The resulting foal, I'll Fight Dempsey, was a $300,000 yearling and debut winner at Gulfstream in February. Azara produced a Flatter colt earlier this term before being bred back to Into Mischief.