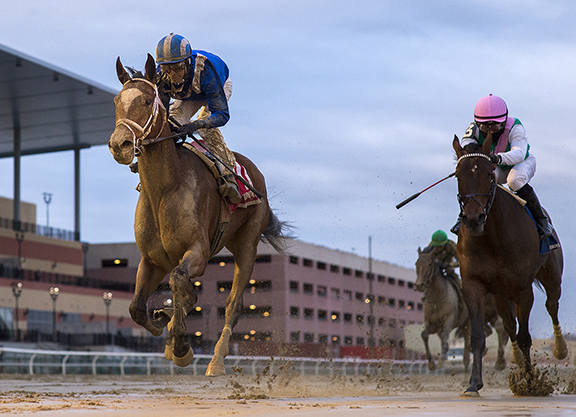 Blue-blooded 'TDN Rising Star' Malathaat (Curlin) looks to follow in her dam and grand-dam's hoofprints by adding a Grade I to her perfect resume Saturday in the GI Central Bank Ashland S. at Keeneland. A debut winner going seven panels at Belmont Oct. 9, the $1.05-million KEESEP purchase romped by 7 3/4 lengths in the one-mile Tempted S. at Aqueduct Nov. 6. She proved distance was no issue when coming alive late with a determined rally to capture a sloppy renewal of the nine-panel GII Demoiselle S. at the Big A when last seen Dec. 5 and prepped for this with a five-furlong bullet in 1:01 2/5 (1/4) at Palm Beach Downs Mar. 27. Initially scheduled to make her seasonal bow in last weekend's GII Gulfstream Park Oaks, Malathaat missed that event after the death of her owner Sheikh Hamdan earlier in the week.

Simply Ravishing (Laoban) scored her career high at this oval last term and hopes to repeat Saturday. Opening her account with a pair of victories at Saratoga last summer, including an off-the-turf renewal of the P.G. Johnson S., the bay dominated by 6 1/4 lengths in the GI Darley Alcibiades S. here in October. She was fourth in both the GI Breeders Cup Juvenile Fillies and GII Golden Rod S. in November and makes her first start of her 3-year-old season Saturday.

Will's Secret (Will Take Charge) will try to extend her hot streak and take her game to the next level in the Ashland. Graduating at fourth asking in an off-the-turf event at Fair Grounds Dec. 20, the homebred registered a 5 1/4-length decision in a muddy renewal of Oaklawn's Martha Washington S. Jan. 30. The dark bay wired that venue's GIII Honeybee S. last time Mar. 6 and Dallas Stewart shows faith in his charge by choosing this spot over the GIII Fantasy S. back in Hot Springs Saturday.