Home » Archive » Top News » Maker Files Complaint Against Zayat; Diodoro May Be Next

Maker Files Complaint Against Zayat; Diodoro May Be Next 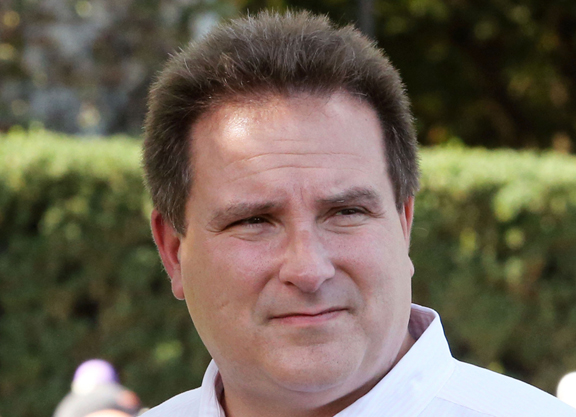 Ahmed Zayat's legal problems continue to grow. Trainer Mike Maker filed a complaint in Jefferson County (Kentucky) Court Thursday seeking $120,921 over what he alleged are unpaid training bills. Maker's complaint was filed less than two weeks after a Kentucky court ordered Zayat's assets into receivership, the result of claims by an investment group that says Zayat owes it $23 million.

According to the complaint, Maker trained as many as eight horses for Zayat Stables, which was falling behind on paying its training bills. Maker said that he was prepared to take legal action in September, but, instead, worked out a payment plan in which Zayat was required to send him $10,000 a month. The trainer said the installment payments often weren't made on time and the monthly bill for January was not paid at all.

“Back in September, I thought it was getting out of control,” Maker said. “We were going to file suit then and they made a settlement agreement, which we came to terms on. He defaulted on that on Jan. 15. I figured enough is enough. I might as well do what was inevitable.”

Maker said he no longer trains any horses for Zayat.

Zayat uses several different trainers currently and at least one, Robertino Diodoro, appears ready to also take legal action. Diodoro said he is owed a significant amount of money by Zayat and is prepared to take steps to collect on overdue bills.

Zayat's most recent financial problems came to light when New York-trainer Rudy Rodriguez came forward and claimed that Zayat owed him more than $600,000 in unpaid bills. Rodriguez was set to sell the two horses he trained for Zayat and keep the proceeds, but did not have to do so after he and Zayat came to terms. Last week, a Fayette County (Kentucky) judge granted a motion to put Zayat's assets into a receivership. That was the result of a lawsuit file by MGG Investment Group, which said it was owed $23 million by Zayat. MGG also alleged that Zayat had sold shares in American Pharoah, which the company claimed were to be used as collateral against his debt. That was noted in Maker's complaint.

“Defendants had no intention of honoring the settlement agreement, as the Defendants had already notified other creditors of their insolvent status and, according to published reports, begun to liquidate assets without notifying creditors,” it read.

Zayat has gone to court seeking to dissolve the order appointing a receiver.

Aware of Zayat's financial problems, Maker said he was not confident he would get paid. He added that many trainers have to deal with owners who do not pay their bills.

“You hear all the complaints about Lasix and the integrity of the game when this sort of thing is a huge part of the game that everybody is afraid to mention,” he said. “You go around and ask trainers how much money they get beat out of every year by owners and it is pretty alarming. We go to a gas station and there's a sign at the pump that says if you drive away without paying you will lose your license. If we go to a restaurant and eat and run off you will get arrested. Go to Walmart and walk out with pack of gum and you will get arrested. But these guys come into this industry and don't pay the trainers and nothing happens.”

Diodoro, who is best known as a claiming trainer and says he has four horses for Zayat, told TDN that Zayat owes him “a large amount of money.” He declined to say exactly how much the debt is.

“I'm not sure what I'm going to do yet but I have to do something,” he said. “It is a large amount of money and I wish I could just sweep it under the rug. I'm not in a position where I can afford to do that. I am going to have to do something and do it fairly quickly. I'm no high roller and we are talking about a lot of money.”

Diodoro said he has contacted an attorney. He said Zayat's bills had been piling up for “six plus months.”

“It could have been worse because at one point I had 12 for them,” he said. “Hopefully, it works out for everyone. This game is tough enough to make it, never mind making it when you're put in a position like this.”

Many of Zayat's better horses are trained by Richard Baltas. The list includes Desert Stone (Ire) (Fastnet Rock {Aus}), the winner of the Jan. 4 GII San Gabriel S. at Santa Anita. Baltas said he is owed money by Zayat, but he said he wasn't prepared to take any legal action.

“Yes, there is money owed,” he said. “They owe me a lot of money. But I have been winning races for them and getting horses claimed and they have been paying me. I don't want to get into the number. But it's not like they are totally defaulting and not calling me or not sending me money. It's just that I've been carrying them a little bit longer than I want to.”

Baltas said that he was waiting to see what came out of the MGG legal action and that, if it came down to it, he would follow the court's instructions so far as how to proceed with the Zayat horses.

D. Wayne Lukas has one horse for Zayat and also said he was dealing with unpaid bills.

“I'm going to ride this out and see if the receiver will at least pay the training bills,” said Lukas, who declined to reveal how much he is owed. “I haven't done anything legally. I just hope someone steps up and makes sure things are done properly. I will give courts every chance to make it right.”