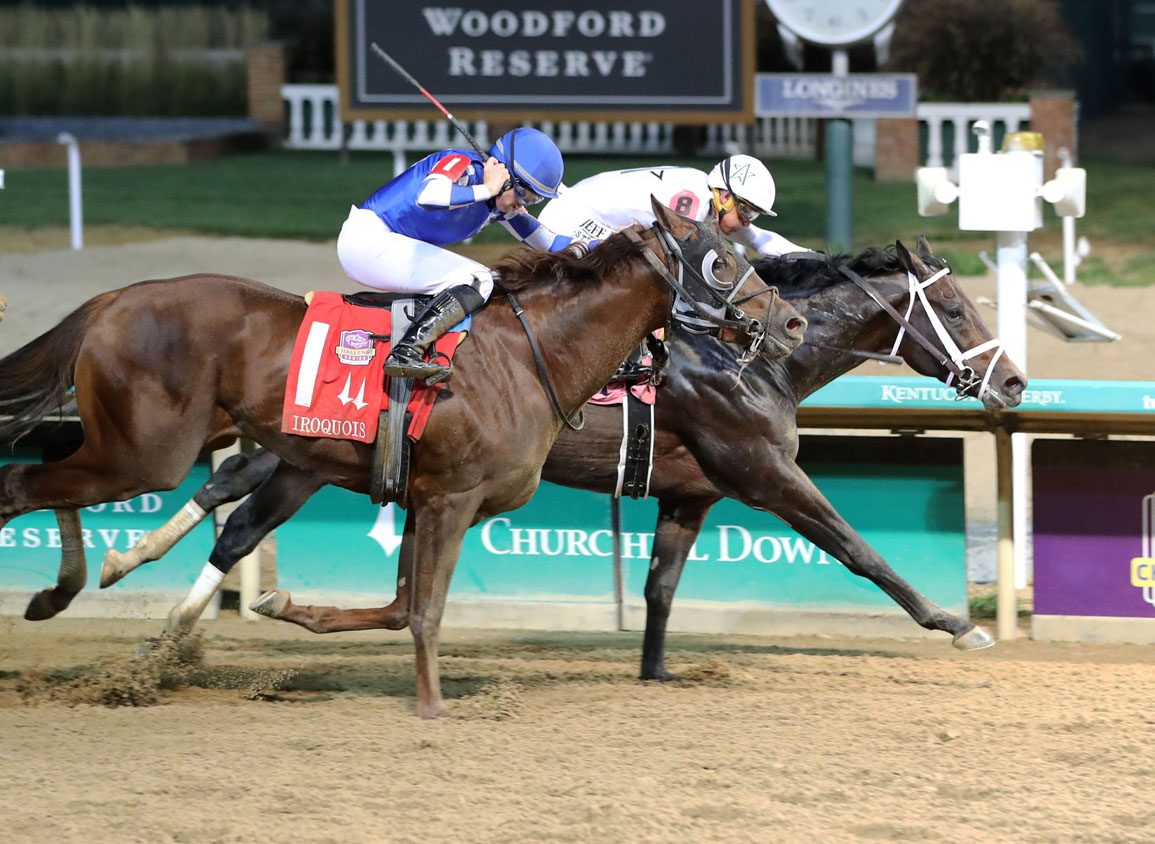 Major General took his record to two-for-two with a gutsy score in the GIII Iroquois S. at Churchill Downs Saturday, earning a spot in the gate for the GI Breeders' Cup Juvenile. The $420,000 KEESEP buy went gate to wire in his 6 1/2-panel unveiling at Saratoga Aug. 21 and was given a 9-2 chance for this step up in class. The bay raced off the rail in mid-pack as a pair of longshots battled through an opening quarter in :23.82. Moving into a joint fourth as the half went in :47.89, Major General charged to the lead alongside 'TDN Rising Star' Stellar Tap (Tapit) approaching the far turn and they entered the stretch in unison. A brief battled ensued, but Stellar Tap threw in the towel halfway home and a host of pursuers rallied up to take his place, but Major General held on for a narrow victory over Tough to Tame. Stellar Tap's jockey Ricardo Santana claimed foul for some bumping in the lane, but the result was left as is.

“You're always confident whenever Todd [Pletcher] puts you on a horse,” Javier Castellano said. “His team does a great job and this horse is just learning. He seemed to enjoy going two turns and when the other horses got to him in the stretch he started to re-break.”

Pedigree Notes:
Major General is the eighth graded and 17th black-type winner overall for WinStar stallion Constitution, whose third crop is two this year. Circular Road Breeders bred both Major General and his dam, the unraced No Mo Lemons, but sold them both in 2020. Major General went as a Keeneland January short yearling for $265,000 to Northface Bloodstock and was successfully pinhooked into a $420,000 September yearling, where Maverick Racing took him home. No Mo Lemons was hammered for $70,000 by Titletown Racing Stables at the Keeneland November sale and her now-yearling colt by Always Dreaming brought $95,000 at the same sale from Steven W. Young. No Mo Lemons didn't produce a 2021 foal, but was bred to Kantharos for next term. A number of stakes winners trace to the grandam of No Mo Lemons, a half-sister to GISW Well Chosen (Deputy Minister), including GISW Leofric (Candy Ride {Arg}) and MGSW & GISP Multiple Choice (Mt. Livermore). Uncle Mo, with just seven crops to race himself, is young for a broodmare sire, but Major General counts as the third stakes winner out of his daughters.