Majestic Warrior's I Still Miss You Wins the Astoria 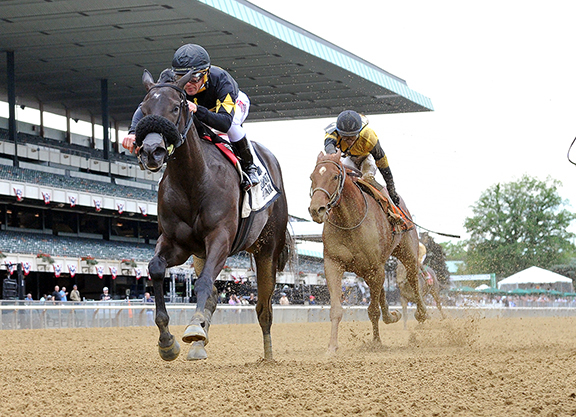 I Still Miss You | Sarah Andrew

I Still Miss You showed good debut speed to defeat state-bred foes by daylight on debut here May 11, and handled deeper waters without issue to keep her unblemished record intact. Quickest from the gate, the dark bay was pestered by favorite Sugar Queen (Gemologist) with Waki Patriot perched three deep through an opening split of :22.19. Best Performance ranged up with a bid heading for home, but I Still Miss You still had plenty left in the reserves and spurted clear in midstretch with a few reminders from Javier Castellano.

“It was a big field and with the inside [two] post, I had to use her speed and she responded,” offered Castellano. “We didn't have a chance to rate; we had to send her because of the position she had. From the outside post, we can ask her to relax a little bit and don't push her too much, I think you'll be able to stretch her out. I think she's a straightforward filly, it's the first time I rode her. She'll move forward well.”

Added conditioner Jeremiah Englehart, “Coming out of that [first] race she's done everything right. She didn't lose any weight, her blood work remained good and we thought she would give a similar effort here if she was fast enough and she proved that today. I thought Javier did a great job with her. I've had two great rides from her with Irad [Ortiz, Jr.] the first time and Javier now and you're pretty lucky when you're in that company.”

A debut winner herself at two, the winner's dam was claimed by these Gold Star Racing and Englehart for just $8,000 at Penn National in 2011, and won eight times for her new connections, mostly at Finger Lakes, before being retired in 2013. Lion's Terms is a full-sister to a pair stakes winners. I Still Miss You is her first foal. She produced a Blame colt in 2016 and was bred back to Orb.