Majestic Warrior Debutante Up In Time at Saratoga 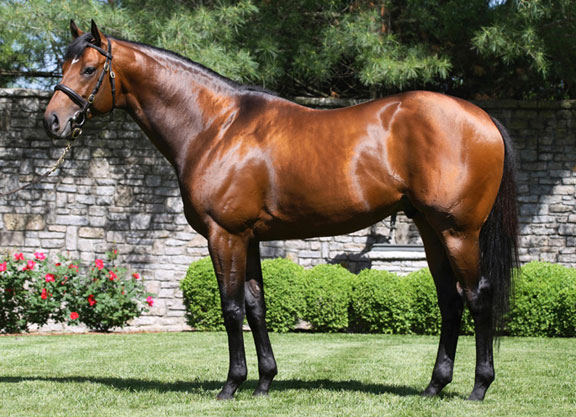 2nd-SAR, $83,000, Msw, 7-24, 2yo, f, 1 1/16mT, 1:43.11, fm.
+MAJESTIC BONNIE (f, 2, Majestic Warrior–Fancy Point, by Point Given) , who took some early nibbles before drifting up to 12-1, came flying late to a debut score routing on the Saratoga lawn for a sharp 2-year-old grass outfit. Coming into this race off a series of half-mile breezes, including a best-of-35 bullet in :50 around the dogs on the local training turf July 8, the chestnut settled toward the rear of the field, began to rev up in midpack three wide on the far turn, tipped out into the center of the course straightening for home and rallied determinedly to nail pace presser Enstone (Tiznow) in the final yards for a neck triumph. The winner's dam captured the P.G. Johnson S. over this turf course in 2010 as a juvenile and was third in the GIII Miss Grillo S. later that year. She's a half to SW Fancy Fusaichi (Fusaichi Pegasus) and MGSP El Commodore (El Prado {Ire}). Third dam Fabuleux Jane (Le Fabuleux) was a MGSW/MG1SP turfer in France. Majestic Bonnie sold for $125,000 at OBS April after breezing a quarter-mile in :21 1/5 (video). She has a half-sister by Exchange Rate foaled this year. Lifetime Record: 1-1-0-0, $49,800. Click for the Equibase.com chart or VIDEO, sponsored by Fasig-Tipton.
O-Bona Venture Stables; B-Kinsman Farm (KY); T-George Weaver.