Home » Archive » Top News Europe » Magical Spikes Temp, Out of BC, Will Visit No Nay Never

Magical Spikes Temp, Out of BC, Will Visit No Nay Never 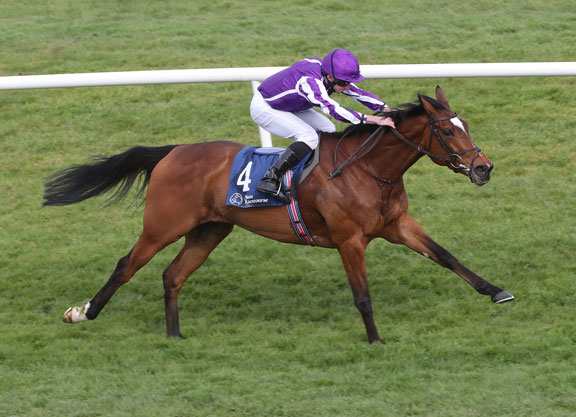 MG1SW Magical (Ire) (Galileo {Ire}–Halfway to Heaven {Ire}, by Pivotal {GB}) was found to have an elevated temperature on Monday morning and will not travel to the Breeders' Cup at Santa Anita, Racing Post reported. The Coolmore runner, who was one of the stars pre-entered in the GI Breeders' Cup Filly & Mare Turf, won the G1 QIPCO Champion S. last out Oct. 19. Officially retired, she will visit Coolmore's No Nay Never (Scat Daddy) next year. The rest of the Ballydoyle contingent is expected to arrive at Santa Anita around 8 p.m. PST and will not grace the track until Thursday morning, as they must first clear quarantine.

“Magical spiked a slight temperature this morning so she hasn't travelled to America,” Aidan O'Brien told Racing Post of the English and Irish highweight. “She worked this morning and we were delighted with her but we take their temperatures every day. She was due to leave at 9:30 a.m. and this happened at around 9:15 a.m., so our vet John Halley advised that she shouldn't travel. She has been an unbelievable filly. She was so game, so consistent and so classy. It has been a pleasure and a privilege to have anything to do with her.”

Magical, second to Enable (GB) (Nathaniel {Ire}) in the 2018 GI Longines Breeders' Cup Turf, landed three of her Group 1 wins this year, taking the Tattersalls Gold Cup, Irish Champion S. and the aforementioned Champion S. during a busy nine-start season. She also played the bridesmaid in the G1 Prince Of Wales's S., G1 Coral-Eclipse S., and G1 Yorkshire Oaks, the second two once again to the Juddmonte colourbearer. As a sophomore, she won the G1 QIPCO British Champions Fillies & Mares S., and she was also Group 1-placed as a juvenile in the G1 Moyglare Stud S. The bay's record stands at 9-21-6-0 with $4,321,653 in earnings.