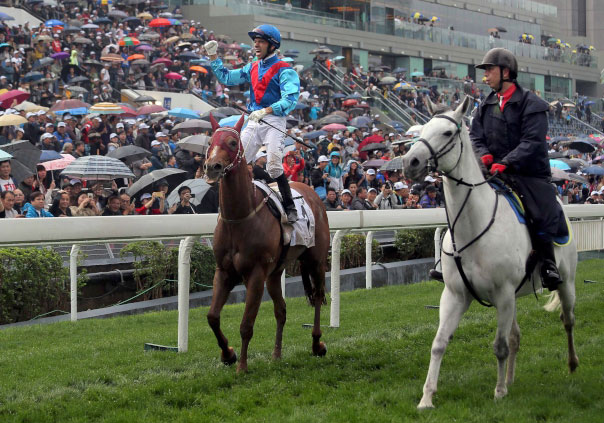 A rain-soaked afternoon in the New Territories could not forestall history, as Rapper Dragon (Aus) (Street Boss) became the first horse to sweep the 4-year-old Classic series with a convincing defeat of his emerging rival and ‘TDN Rising Star’ Pakistan Star (Ger) (Shamardal) in Sunday’s BMW Hong Kong Derby. The win was the sixth in the Derby for trainer John Moore, breaking the previous record held by Brian Kan, and his third in the last four years. For Joao Moreira, the Brazilian rider who continues to set and break his own records in Hong Kong, it was a landmark first win in the race.

“I got emotional, I was saying to everyone beforehand that it was the race I wanted to win the most and thanks to God that I achieved that,” Moreira told the Hong Kong Jockey Club’s David Morgan. “I was given a 100% fit horse by the team–John Moore, the mafoos, the owner–and we were able to deliver, so it’s a dream come true.”

A stakes winner against older horses at three, Rapper Dragon was by 14 points the highest-rated runner in this year’s Derby, and the punters backed him down from 6-5 into odds-on favoritism as the field loaded at the 2000m start. The chestnut, whose chances were only enhanced by drawing gate four, secured a perfect spot from about fourth and outside of Seasons Bloom (Aus) (Captain Sonador {Aus}) as My Darling (Aus) (Mossman {Aus}) and Circuit Hassler (NZ) (Shocking {Aus}) had the most early foot. Beauty Generation was trapped out around the first turn, while Pakistan Star, to no one’s surprise, was snagged back to last from gate 13 to caboose the field.

The complexion of the race changed some with six furlongs to race, as Rodrico (Aus) (High Chaparral {Ire}) rolled up to inject some speed, and Zac Purton asked Beauty Generation for a bit of acceleration, allowing him to get cover. Soon after that, last year’s Derby-winning rider Hugh Bowman to got after his mount Dinozzo (Ire) (Lilbourne Lad {Ire}) and that duo poked a head in front outside of Rodrico on the circle, but meanwhile, Moreira began to wake up Rapper Dragon and the chalk immediately split My Darling and Circuit Hassler before looming in front three off the inside at the 400m. Beauty Generation, left no other option but to circle four and five deep outside of Circuit Hassler in upper stretch, emerged as a potential danger, but never truly appeared dangerous, and it was Pakistan Star who looked a real chance 250m out. Silvestre de Sousa, who gambled on an inside run in the lane with the Tony Cruz trainee, got through between rivals and quickened up nicely, but Rapper Dragon had done enough to complete the sweep.

“When he got in front a little bit too early, he started to snake around a bit,” Moreira commented. “He went in, he went out, I had to switch the whip, left and right, and switch it again. But good horses can do those things and still win the races. He’d never been in front that far from home before. It was also his first time at 2000m and they start in front of the grandstand, so the starting gate was inside the track and he had a look at it–he’d never experienced that before.”

Previous winners of the Derby like Vengeance of Rain (NZ), Ambitious Dragon (NZ), Designs On Rome (Ire) and Werther (NZ) managed to double up in the G1 Audemars Piguet Queen Elizabeth II Cup (2000m), but Moore is contemplating dropping Rapper Dragon back in trip for the G1 Champions Mile May 7.

“Rapper Dragon’s got versatility so I’m sure I can freshen him up and bring him back to the mile–he’s got the gate speed, so I’m sure he’d be a live chance in the Champions Mile,” Moore said. Werther, recent winner of the G1 Hong Kong Gold Cup, will represent the Moore barn in the QE II.

Conditioned in Australia by Gai Waterhouse as Street Rapper, the gelding broke his maiden at third asking at Wyong, was third in the G3 Schweppervescence S. and a half-length second in the G1 Champagne S. before his export. He beat subsequent G1 Longines Hong Kong Mile winner Beauty Only (Ire) (Holy Roman Emperor {Ire}) off a rating of 107 to end the 2015-2016 season, but was set back by injury this term and resumed with a fifth in a Class 1 (1400m) on International Races day.

What They’re Saying…
“He stays well but he just got beaten by a nice horse. When I burst through he gave me a dash but when I got to the winner he just picked up again. Both horses went on the ground but when you ride a horse from the back it’s always a bit difficult, but I’m happy with the way he went through. The best horse won.” –Silvestre de Sousa, jockey, Pakistan Star

Pedigree Notes…
Much of Rapper Dragon’s female family was offered by Eduardo Cojuangco’s Gooree Park Stud and performed well at the 2015 Magic Millions National Broodmare and Weanling Sale. The winner’s dam was purchased by Michael Wallace for A$360,000 in foal to Congrats (catalogue page) and produced a colt by that successful dual-hemisphere stallion in August 2015. He was recently purchased by KS Research for A$110,000 from the Newgate Farm consignment at the Gold Coast Yearling Sale. Rapper Dragon’s half-sister Swing Sensation (Aus) (Northern Meteor {Aus}) fetched A$330,000 from Rosemont Stud/Blue Sky Bloodstock, while Swing Vote, sent through the ring on an October cover by Smart Missile (Aus), realized A$360,000 from Neil Jenkinson Bloodstock. That produce, a filly, is consigned by Widden Stud as lot 381 to the upcoming Inglis Easter Yearling Sale. Rapper Dragon’s half-sister by Your Song (Aus) (Fastnet Rock {Aus}) was subsequently knocked down to Canning Downs for A$150,000, while Amanpour (Aus) (Northern Meteor {Aus}), a half-sister to Swing Dance and winner of the G1 Queen of the Turf S., was the second-highest priced lot at the 2015 Broodmare Sale. Then four, she was hammered down to the Rosemont/Blue Sky team for A$1.5 million. The dam of a weanling colt by Newgate’s Deep Field (Aus) (Northern Meteor {Aus}), Swing Dance was most recently bred back to Street Boss.