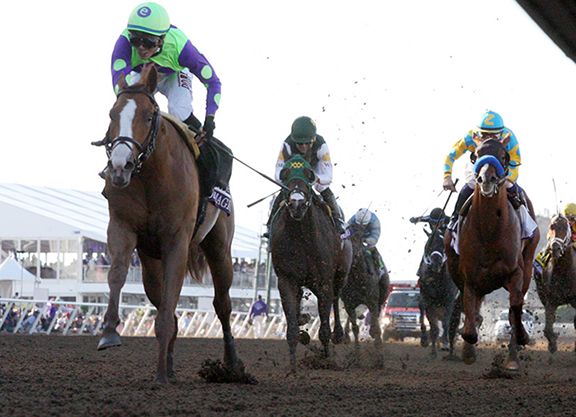 “I thought he was a winner every step of the way,” winning trainer Chad Brown said after saddling his 10th career Breeders' Cup winner. “We took a shot because he was a maiden, but he's developing rapidly. I am so proud of this horse and proud of my staff. I feel so grateful that the two great owners who are partners in this horse gave me a chance with him. This guy here is developing rapidly. He's not a real big horse, but he's growing. It was his first time around two turns, and he aced the test.”

Good Magic came away well and secured a beautiful spot tracking from fourth through fractions of :22.83 and :46.75. Tipping off the fence approaching the stretch, Good Magic blew past Solomini soon after and poured it on in the final furlong.

“It went the way Chad [Brown] drew it up for me,” winning jockey Jose Ortiz said. “He said, 'Break good and leave. When you make your move, be ready to be on the outside.' Because he didn't like the way the track was playing inside. I waited and went to the outside. I had the opportunity to go inside but I stuck with the plan to go outside.”

Good Magic was making his two-turn debut in the Juvenile. A debut second as the 3-5 favorite on the GI Travers S. undercard, he was beaten just a half-length going a one-turn mile in the Champagne.

“Just winning is fun,” Edwards said. “I don't care if it's a claiming race, which we're not in many of them. Winning is fun in general. Anytime you win, it's great. This is spectacular. But winning is winning. It's always fun. It's the same adrenaline every time you win.”

Barbara Banke of Stonestreet Stables added, “I actually take almost all the colts, unless there is a reason not to take him. So we took him, I was iffy about selling him, but then we got a great partner, and a really lucky partner. So I'm very happy.”

Good Magic is the first Breeders' Cup winner for his sire Curlin, winner of the 2007 GI Breeders' Cup Classic at Monmouth. The winner's dam Stonestreet homebred Glinda the Good won a pair of stakes and was also third in the 2011 GII Pocahontas S. Good Magic has a yearling half-brother by Speightstown, a $200,000 KEESEP purchase Paul Roy, and a weanling Super Saver half-sister. His dam was bred to Pioneerof the Nile this season.