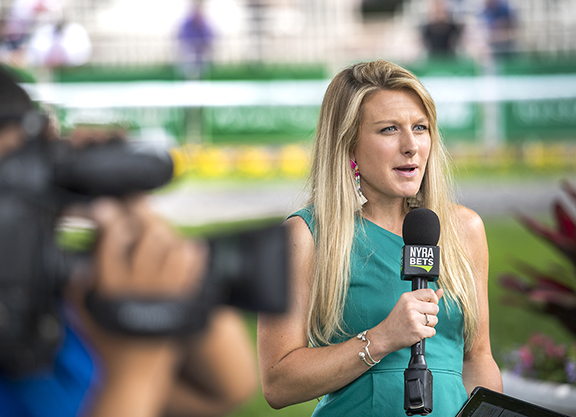 It's been a long 16 months since the crew for the TDN Writers' Room presented by Keeneland were all together in their actual studio to record the podcast, and they reunited at last Wednesday morning, welcoming Fox Sports and NYRA paddock analyst Maggie Wolfendale on the show to share excitement about the opening of Saratoga to fans once again and discuss how to pick winning horses based on physical appearances.

“It's not even just the racetrack,” Wolfendale, calling in via Zoom as the Green Group Guest of the Week, said when asked to explain how integral fans and tourists are to Saratoga. “It's that the entire town knows they're racing. You can go anywhere and just sit at a bar and have a conversation about the third race on Friday. Then at the track, everyone has their own places they want to be. There's something for everyone too. It's that old county fair feeling. And it's all about the horses. People line the massive paddock we have and line the walkway from the backside to the paddock, where the horses are like boxers coming in for a big fight. The anticipation before every race is something that I don't think you necessarily see at other tracks the way you do at Saratoga.”

Wolfendale has proven herself an indispensable member of the groundbreaking America's Day at the Races broadcasts, in large part because of her expertise in horseflesh and ability to provide horseplayers insight from a close-up view of the animals.

Asked what she looks for in 2-year-old races in particular, she said, “They have the least form to go on, and they take the most prep work. But then sometimes, that prep work goes out the window once you see them in the paddock or on the track. You do your homework, you look at pedigrees; who might have that precocious pedigree that says they can win early, who's suited to different surfaces, who might be one that is crying out to get more distance as the 2-year-old season progresses. But when you look at them physically, a lot of times it comes down to the horse who is just the most physically mature, who's the furthest along from that physical standpoint. You can see the other ones are still developing, because the ones that are physically mature, they're just going to be bigger and stronger than their competition.”

Elsewhere on the show, which is also sponsored by West Point Thoroughbreds, Legacy Bloodstock and the Minnesota Racehorse Engagement Project, the writers looked forward to the Saratoga and Del Mar meets before being joined by TDN International Editor Kelsey Riley to reflect on the great Galileo. Click here to watch the podcast; click here for the audio-only version or find it on Apple Podcasts or Spotify.