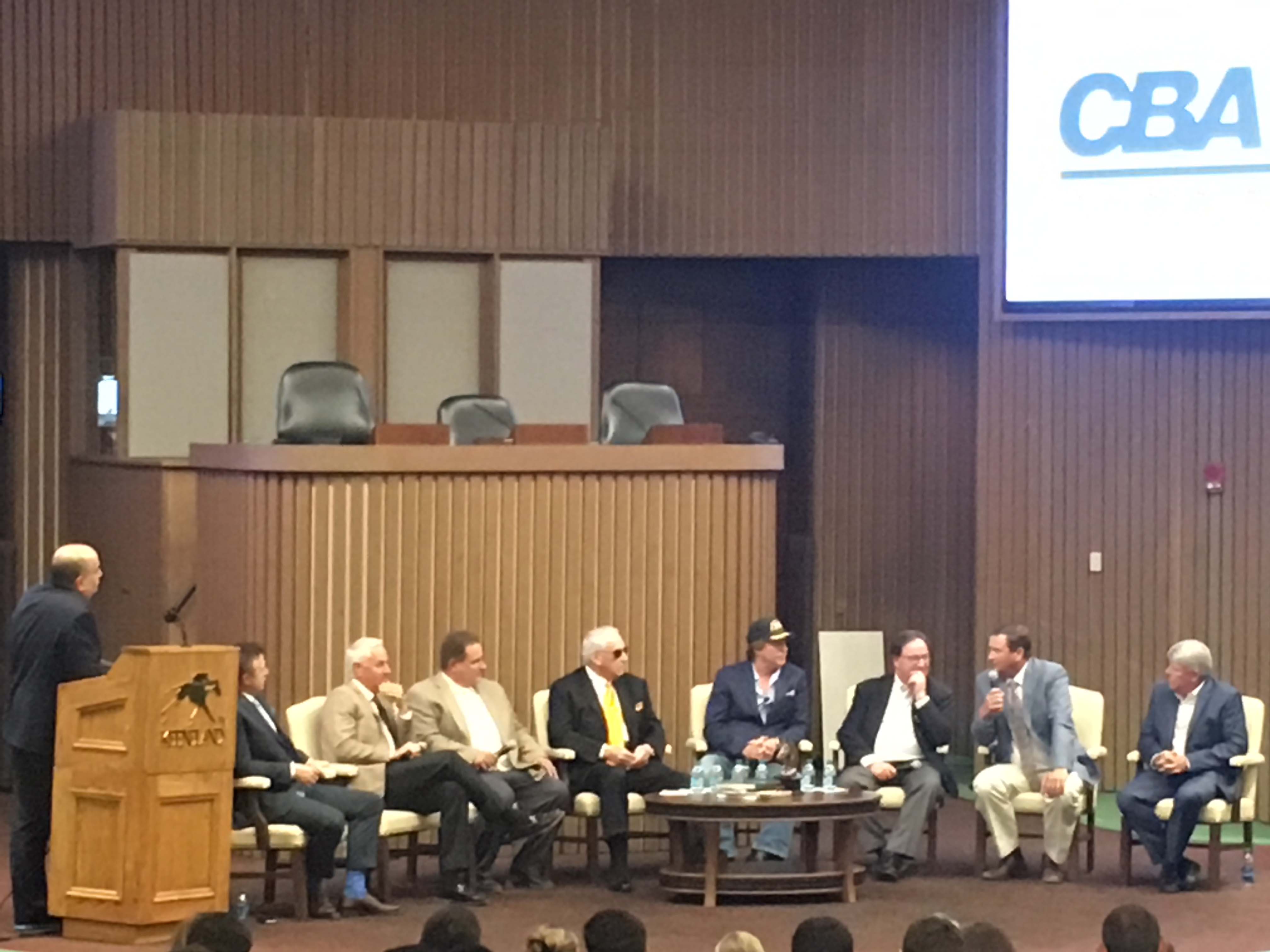 The Consignors and Commercial Breeders' Association (CBA) held its fourth annual Education Symposium in Lexington, Kentucky, on Monday, highlighted by an hour-long toast and roast of Hall of Fame trainer D. Wayne Lukas, which was moderated by veteran track announcer Frank Mirahmadi.

Mirahmadi warmed up the crowd by discussing many of Lukas's top runners and roasting the media as well as most of his competition, notably Bob Baffert. He also showed off his remarkable ability to do impressions of famous race calls.

All of them, along with the audience, were captivated by a video Keeneland put together of Lukas's accomplishments. Lukas then joined them on stage and received a standing ovation.

“He has been my mentor and my favorite person in life,” said McLaughlin. “He has taught me so much and done everything. He failed at one thing, though. All of these guys up here are great horsemen and can ride ponies. He tried his damnedest with me, and bought a pony that cost about $20,000 and was literally push button, but I never learned to ride a pony. I am surprised I was able to keep my job for seven years, but I have a lot fond memories. He was good on the track and off the track to me.”

Another video was shown of those who couldn't be in attendance but who wanted to join in the fun, including Baffert, who said he had a hard time being negative about Lukas, but joked that he seemed to propose to every pretty girl he took to dinner.

The floor was opened up for stories, both related to horses and not, and all of the participants got in the spirit of it.

“One of the most fortunate things about what we all were able to do was share all these fantastic times working for Wayne,” said Pletcher. “People were attracted to Wayne's organization, as you can see by the quality of people up here. Everyone could recognize it was the opportunity of a lifetime to get a chance to work for someone that terrific, that great. It was an unbelievable experience for all of us.”

In the end, while stories were swapped and laughs were had, it was much more toasting than roasting of the Hall of Fame trainer.

“I don't remember these guys being so warm and fuzzy,” said Lukas. “The horses come and go, and the champions are great, but to work with these guys, they put me on their shoulders and put me right into the Hall of Fame. I mean that sincerely.”

On the serious side…

The CBA symposium kicked off earlier in the day with a welcome from Joe Seitz, the organization's president, and an opening speech from Kentucky State Senator Damon Thayer.

After telling the audience about his background, Thayer discussed how the state's government is progressing in general as well as some of the achievements in horse racing that have been accomplished over the past 15 years. Those equine successes included improvement when it came to transparency in sales, medication regulations, and breeders' incentives.

“I would say to you as participants in the business, these are good times in Kentucky,” said Thayer. “Yes, we've seen a contraction of our sport at a national level, but it was probably long overdue. For the longest time we were producing way too many horses for the marketplace, and we had way too many race dates for marketplace.

“I think what you see now is a real equilibrium when you look at the public sales numbers over the last few years. The trend is very good that the supply and demand is just about right. On the racetrack side, we are not quite there yet. Racetracks have been slower to make adjustments in the number of races, but it is happening.”

Updates from around the industry…

The symposium also covered the fact The Jockey Club now requires Thoroughbred foals be microchipped for identification starting with this foal crop. Breeders had the option to do it in 2016 to get familiar with the process before it became mandatory, and TJC expects about 60% of the 2016 foal crop will in fact be microchipped.

A short video was shown during the symposium to help breeders who are unfamiliar with the process learn what they need to do from this foal crop onward.

Later in the day, Mike Meuser, who has been the Thoroughbred Aftercare Alliance's vice president and secretary since it was founded, spoke to the audience on the ways TAA is endeavoring to improve aftercare for racehorses.

“The thing we learned this year, when we surveyed within our industry about perceptions of the TAA, is that barely half of the people in the industry know about the function that accreditation plays in what we do,” he said. “We are the only organization in North America that accredits aftercare facilities. The reason we do that is because we want to make sure that the money gets to the horses in the best way and that the money goes to the horses. At the end of the day, we have been able to transform aftercare in North America through that process.”

The first full panel of the day focused on young professionals in the industry. It featured two current first-year trainees with Godolphin Flying Start, two men who work for local farms, and a representative from a local feed mill.

Moderator Kurt Becker prompted each panelist to discuss their starts within Thoroughbred racing. Jack Carlino and Megan Hebbert are on the GFS, Chance Timm is the director of stallion seasons and shares at Lane's End Farm, Ben Henley handles bloodstock services and customer relations at Airdrie Stud, and Anthony Koch is the sales and marketing manager at Hallway Feeds.

GFS, which was formerly known as Darley Flying Start, has established itself as a leader when it comes to educating young people who want to work in the industry. The two-year program is known to be competitive, so those who were accepted into it discussed the best ways to have a chance of becoming part of it.

“I think the biggest thing is to show initiative,” said Carlino. “Show that you are really passionate about the horses and show that you really care. You can do that in a variety of ways. Also, if you are used to one thing and being in one place, go out of your comfort zone and do something else. That shows that you care not only about the horses and the business, but that you are willing to get out there.”

Given the international nature of racing, Becker and the foreign panelists also discussed what those interested in working in the United States need to do to make that dream a reality. It all starts with getting the proper work visa.

“It's very complex,” said Henley, who is from Australia. “The best thing you can do is get a good sponsor. I have been very fortunate with Mr. Brereton Jones. He's been amazing.”

A takeaway piece of advice on how to approach getting a job in the industry came from Koch, who ended up at Hallway Feeds after Lee Hallway saw him give a speech and was impressed.

“I always remind young people that people are always watching you,” said Koch. “When you are out of the town for the weekend, there is somebody there watching you and that somebody could have an effect on you later in life. If you are a dedicated horse person, if you are willing to work and willing to take those chances and opportunities, there are always farms willing to help.”

The final educational panel of the afternoon featured Dr. Emmeline Hill, the chief scientific officer of Plusvital. The company is a leader in equine nutrition and genetic testing, and Hill led the audience through a deeper look at using genetics to attempt to produce a better racehorse through what is called the speed gene.

“There are a number of subtle differences in the genetic code that make each individual an individual,” she said. “The value of genetics is dependent on the inheritable component.”

Hill acknowledged that there is controversy about using genetic testing to breed for a specific type of racehorse, and she also discussed how she believes genetic testing is not a silver bullet, but rather an additional tool.

“Genetics is only a fraction of total success, and in no way will genetics replace the skills of the horsemen and the horsemanship that is required to produce an elite athlete,” Hill said. “What it is, is part of the puzzle, and it is the part of the puzzle we are trying to evaluate.”

Plusvital has tested about 15,000 horses in the course of its studies. While many horses are tested anonymously, 200 stallions are listed on the company's website. About 95% of horses fall into one of three categories, which range from sprinters to long-distance types.

One horse who was discussed directly is multiple Group 1 winner Galileo Gold (Paco Boy). According to Plusvital, trainer Hugo Palmer approached them about whether the colt was suited for the distance of the G1 Investec Derby. When the numbers came back unfavorably, his connections opted to run him in the one-mile G1 St James's Palace S. during Royal Ascot, and he won.

“Whether it is recognized or not, people have been using genetics for 300 years breeding Thoroughbreds,” said Hill. “Anytime you are looking at a pedigree, you are trying to evaluate the genes that have been passed down from ancestors in the pedigree to that individual.

“Breeding is like a genetic lottery. You never know what is going to be passed down, but what you can do using scientific information is essentially load your dice.”