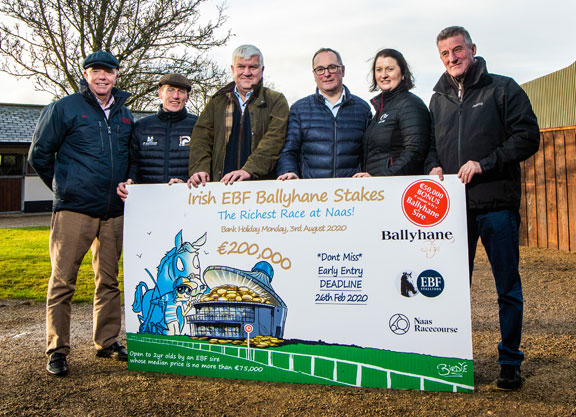 LEIGHLINBRIDGE, Ireland—It's all systems go at Ballyhane Stud with the breeding season underway and its new stallion Soldier's Call (GB) (Showcasing {GB}) already in demand, and on Tuesday the Co Carlow stud hosted the official launch of a valuable new race sponsorship.

The Irish EBF Ballyhane Stakes, to be run over six furlongs at Naas on Monday, Aug. 3, is open to juveniles by a sire registered with the European Breeders' Fund whose median sales price is no more than €75,000, with weights allocated on a sliding scale according to that price. The total prize fund of €200,000 will certainly provide a decent lure for connections but there is an extra cherry on top for any owner with a 2-year-old in training by one of the established Ballyhane sires. The stud's owner Joe Foley is also offering a bonus of €50,000 if the race is won by one of the offspting of his stallions Dandy Man (Ire), Elzaam (Aus), Prince Of Lir (Ire) or Red Jazz (Ire).

Foley, who is also vice-chairman of the Irish EBF, said, “I'm delighted to support the Irish EBF Ballyhane Stakes, a race which should be an exciting addition to the calendar. It's a huge pot for owners and trainers to target and the €50,000 bonus for a Ballyhane-sired winner is our way of rewarding supporters of our stallions.”

British-based trainers Karl Burke and Kevin Ryan flew in from Yorkshire for the launch, and Burke added his support to the concept. He said, “I have some lovely 2-year-olds this year and I'll definitely be targeting some of them at this new race. It's a great prize and Naas has been a lucky track for me. The team at Naas does an excellent job at looking after their UK connections. Not only do they provide top-class hospitality to the owners but they also provide accommodation for the stable staff.”

Irish EBF chairman John O'Connor added, “The concept behind the race is to offer connections of EBF-eligible 2-year-olds, where their sire's median price is no more than €75,000, a lucrative race where they are competing against other similar valued horses who are either home-breds or auction-bought 2-year-olds. By capping the sire's median price, giving weight allowances to lower sire median prices and with the added incentive of the €50,000 Ballyhane Stud bonus, it creates more opportunities for 2-year-olds and it is great to be part of something special.”

Entries for the inaugural running of the Irish EBF Ballyhane Stakes close at 12 noon on Wednesday, Feb. 26. A list of EBF-eligible stallions and their median auction price can be found here.

Following the launch at Ballyhane Stud's local hostelry, the Lord Bagenal Hotel, more than 100 members of the Irish bloodstock community gathered in honour of the late Mark O'Hanlon of Irish Thoroughbred Marketing for the annual memorial quiz in his name. The winning team will be revealed in tomorrow's TDN.