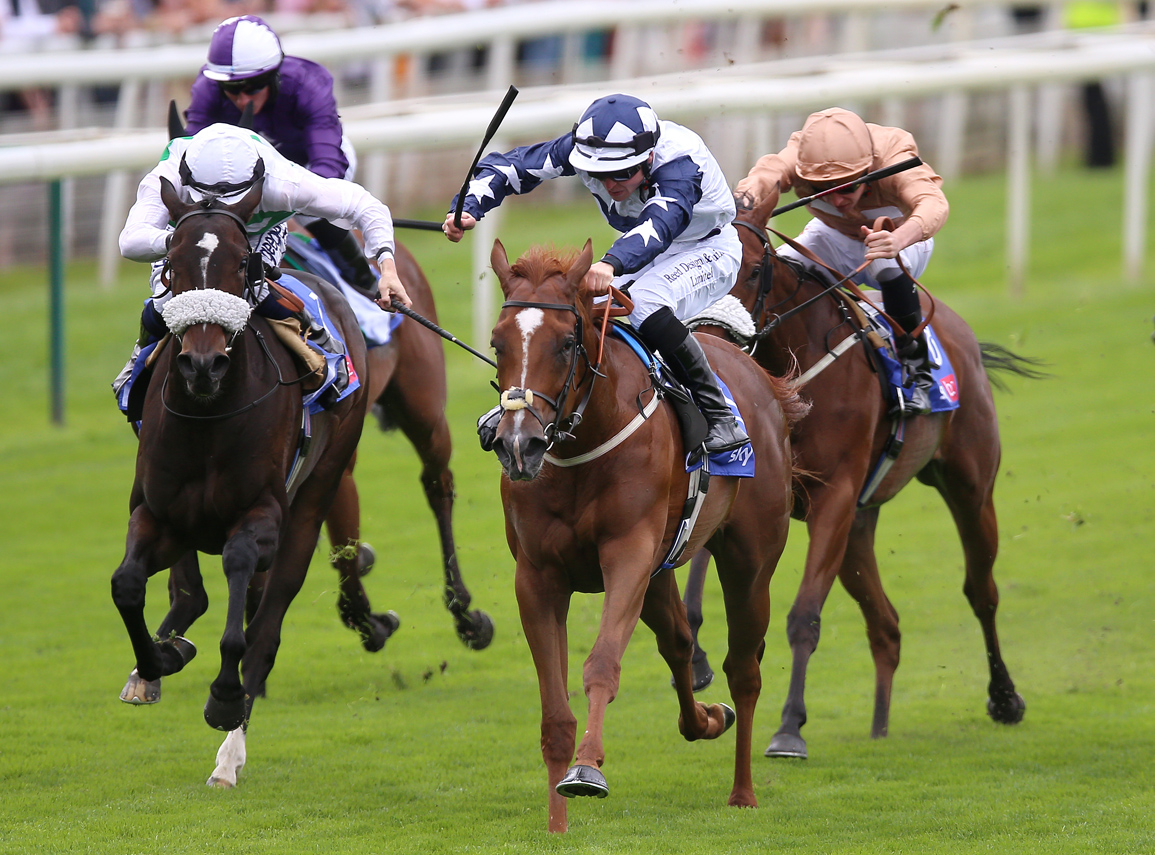 Improving again off her success in the G3 Princess Margaret S. at Ascot July 24, Saeed Al Tayer's Zain Claudette (Ire) (No Nay Never) made the three-pound penalty of Sandrine (GB) (Bobby's Kitten) tell as she denied that G3 Albany S. and G2 Duke of Cambridge S. winner by a length in Thursday's G2 Sky Bet Lowther S. at York. Always in the perfect spot closely tracking the pace, the 6-1 shot was delivered on the front end by Ray Dawson with a furlong remaining as Kirsten Rausing's previously-unbeaten 6-5 favourite was playing catch-up from rear. Despite the inroads made by the market-leader, Zain Claudette was maintaining her momentum to provide trainer Ismail Mohammed and her young jockey with a career highlight. Desert Dreamer (GB) (Oasis Dream {GB}) ran another honest race and finished two lengths away in third, with Oisin Murphy's saddle slipping late on when she was already held. “She's so straightforward and really relaxed, she's a dream of a filly,” the winning jockey said. “She's just so tough, she gives you 150% and is getting better and better. I thought there would be a little bit too much pace for me early on, but she pinged the stalls and travelled so sweetly I didn't want to take her back. This is her trip for now, but she will get further and I struggled to pull her up.”

Campaigned solely at this trip so far, Zain Claudette was a neck runner-up on debut to the subsequent G2 Prix Robert Papin third Hellomydarlin (Ire) (Galileo Gold {GB}) at Goodwood June 11 before opening her account at Newmarket June 25 and nosing out Desert Dreamer at Ascot. Granted an ideal lead under cover from Outside World (GB) (Iffraaj (GB) and Nymphadora (GB) (No Nay Never) here, the chestnut showed more early pace than in the Princess Margaret and that ultimately told as Sandrine was always struggling to pick up her rivals on this flat, fast terrain. Ismail Mohammed is eyeing the obvious next step. “The [G1] Cheveley Park S. [at Newmarket Sept. 25] will be next,” he said. “She has won three times now over six furlongs, but I don't think she is only a sprinter. I asked the jockey if she could stay further and he said 'no problem', so next year, we will go for the 1000 Guineas.”

Anna Lisa Balding said of Sandrine, “She slightly stumbled coming out of the stalls, but you can't take anything away from the winner who has done it well. We'll stick to Plan A and head to the Cheveley Park next. The only reason we came here with the penalty was because we felt it was just too long between races, we had to do something. She'll have a little bit of a freshen up now. David [Probert] said she ran really well and that it was just the penalty that beat her. She was also having to come widest of all. She's done little wrong, is a lovely filly and while it is always sad when you lose an unbeaten record, they have to be beaten sometimes.”

Zain Claudette was one of the cheaper purchases by her sire when costing only £20,000 at the Goffs UK Premier Yearling Sale. She is the first foal out of the unraced Claudette (Speightstown), whose dam Tippity Witch (Affirmed) annexed the GIII Martha Washington S. and is kin to the triple Listed Abergwaun S.-winning sprinter Senor Benny (Benny the Dip). A granddaughter of the listed scorer and GII Diana H.-placed Senora Tippy (El Gran Senor), Claudette's yearling filly by Exceed and Excel (Aus) is catalogued I the upcoming Tattersalls Ireland September Yearling Sale.