Loves Only You Strikes in Kyoto Kinen 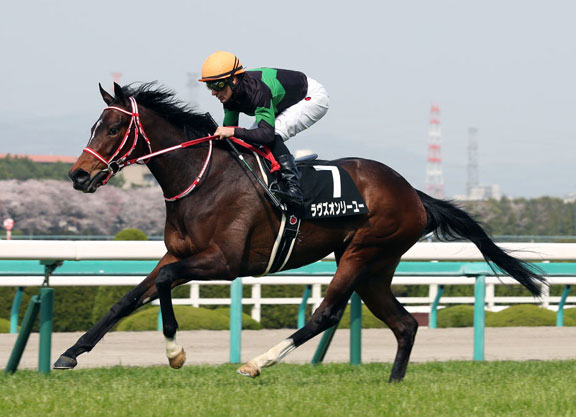 Loves Only You (Jpn) (Deep Impact {Jpn}) conquered all her rivals in the G2 Kyoto Kinen on Valentine's Day at Hanshin.

Wearing a full hood, the 4-5 crowd's pick found a good spot in a tracking fourth one off the fence as Happy Grin (Jpn) (Lohengrin {Jpn}) threw down splits of :23.10 for the quarter and :47.20 for the half-mile. The field was well strung out due to the demanding pace, but pilot Yuga Kawada was calm aboard the 2019 G1 Japanese Oaks winner. After seven panels in 1:23.20, Happy Grin relinquished the lead to the stalking Stay Foolish (Jpn) (Stay Gold {Jpn}) and Loves Only You was poised three deep to pounce. Asked at the head of the lane, she rallied in tandem with Danburite (Jpn) (Rulership {Jpn}) to her inside before making her own way to the front and winning by 1 1/4 lengths with ears pricked. Stay Foolish was a half-length to the good of Danburite at the line.

Loves Only You was undefeated in her first four starts culminating in her Oaks tally, and was third in the G1 Queen Elizabeth II Cup in November of 2019.Winless in 2020 from five appearances, she was third two back in the Queen Elizabeth II Cup again last fall and was 10th in the G1 Arima Kinen on Dec. 27. Her next intended start is the G1 Dubai Sheema Classic at Meydan on Mar. 27.

Pedigree Notes
The much missed Deep Impact has 47 Group 1 winners, Loves Only You among them. In addition, his total number of group winners is 135 and his mark of overall black-type winners stands at 169 worldwide. Storm Cat has sired the dams of 291 black-type winners, 143 at group level, with 43 Group 1 winners. Loves Only Me is one of eight top-level winners by Deep Impact out of a Storm Cat mare.