In 1993, Michelle Lovell rode five races at Saratoga. Then known as jockey Michelle Hanley, she came home with three second-place finishes, but never got that win at the Spa. Twenty-nine years later, she finally made it to the winner's circle. This time it was with the brilliant GII Saratoga Special S. winner Damon's Mound (Girvin), her first Saratoga starter as a trainer.

How do the two experiences compare?

“Riding here back in the day, I was just super in awe of the place,” Lovell explained. “Obviously who wouldn't want to come here and have a go at it? But honestly, bringing Damon's Mound as my first Saratoga starter, I mean that's what dreams are made of, right?”

Damon's Mound is a sixth-generation homebred for Cliff and Michele Love and the first horse Lovell has trained for the Texas-based owners. The horsewoman said her connection with the couple started early this year with a cold call from Cliff.

“Thank goodness I answered the phone,” she said with a laugh. “I knew his name because I used to race in Texas. It was just a really nice person on the other end of the line who said they had a 2-year-old training in Ocala that they thought a lot of. He said he had done a lot of research and decided he wanted me as a trainer if I had a stall. We get these calls as trainers every so often and sometimes the horse doesn't pan out or the owners don't call back, but they kept in touch and when Damon's Mound was ready, he showed up at my barn–this big, beautiful 2-year-old.”

Lovell took an immediate liking to the striking bay colt, who is named after a 146 foot-tall limestone formation outside of the town of Damon, Texas. 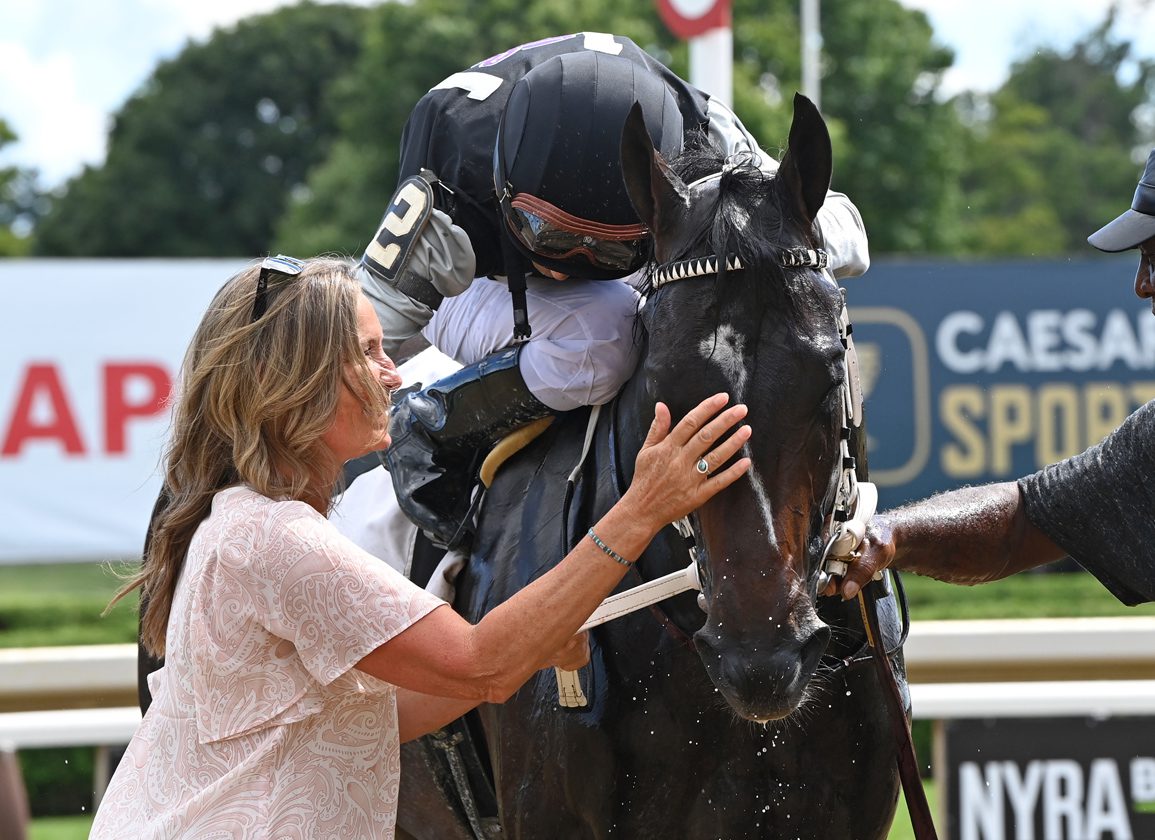 “He was obviously raised right,” she said. “He was broke by Ocala Stud's David O'Farrell and I had lots of contact with him after I got him in. He told me that he was always professional and that he really liked him. We got him in the spring and he never missed a day. He was obviously well-broke. He was actually fit for a half-mile as they said, which sometimes doesn't happen.”

When Damon's Mound was named a 'TDN Rising Star' after his stunning 12 1/2-length obliteration of maidens at Churchill Downs on July 2, Lovell and the Loves were inundated with inquiries about purchasing the promising juvenile. All were turned down.

“We had dozens of calls and text messages,” Lovell shared. “We had some really nice offers from good people that have been in the business for a long time who said they would be happy to be a silent partner along for the ride, but Cliff just said he was going to share this with his wife.”

Despite Love's initial words, Lovell said she couldn't help harboring a few thoughts that the owner's mind might change if Damon's Mound was just as brilliant in his second start as he was in his debut.

“It was always in the back of my mind,” she admitted. “I just thought that I would have to wish them well and understand that it's a business and it happens. I was just grateful to have him to begin with.”

Before leaving for Saratoga, Lovell had the conversation with the Loves of what would happen if they came back with a win in the Saratoga Special.

“We really didn't think we would be worse than second,” Lovell said. “With Gulfport (Uncle Mo) in there we knew we had our work cut out for us, but we thought we could be in the winner's circle. Cliff just told me, 'If he wins they're going to be calling again, but he's still not for sale. You're my spokesperson and he's not for sale.'”

A caravan that included Lovell, Damon's Mound, Elwood (Lovell's speckled pony with a following of his own) and Roy Seales (Lovell's groom with a background working in New York racing) made the journey from their summer base at Colonial Downs Racetrack in Virginia to Saratoga. They shipped in to Mike Maker's barn, which overlooks the main track's far turn. “The first day we were here, he could see the racing and it kind of got him excited,” Lovell said. “He watched really intensely, but then the next day, he slept all day.”

Two days before the big day, Damon's Mound had a similar laid-back attitude as he schooled in the paddock alongside his highly regarded competitor Gulfport.

“He walked in through the crowd with such confidence and poise,” Lovell said. “Especially for a young horse in his second time out, he just owns it. I couldn't have been more proud of him.”

Damon's Mound got another look at 2-5 favorite Gulfport as he trailed the rest of a four-horse field through the opening stages of the Saratoga Special, but after being asked by jockey Gabriel Saez, Damon's Mound made his move at the far turn and accelerated to a 3 1/4-length victory.

“We were confident going in, but you get a little nervous,” Lovell admitted as she reflected on the race.  “He gives you all the confidence because his demeanor is great. He's humble, too. He's proud of himself, but he's a humble horse. It was an awesome day. It couldn't have been more perfect.”

Of course, more offers came in for the new Grade II victor, but Lovell said word has spread that for now, the colt is in her barn to stay.

“It's a great thing that people are interested because obviously he's a very talented 2-year-old with a great future in front of him, but it's refreshing not to have to field those calls and text messages,” Lovell admitted. “I'm truly grateful to Cliff and Michele that they want to be on this journey. They've been waiting for it for a long time, so kudos to them for sticking to their guns. It's a great story for them.”

The Loves were not present for the victory in Saratoga, opting to enjoy the race together at home and plan to attend their stable star's next start.

Damon's Mound returned to Colonial Downs late on Sunday and Lovell reported that he has come out of the race in perfect form. She is still weighing her options for where the Florida-bred could make his next start, considering either the GIII Iroquois S. at Churchill on Sept. 17 or the GI Claiborne Breeders' Futurity at Keeneland on Oct. 8.

While Damon's Mound has already resumed light jogging at Colonial Downs, Lovell is back in New York this weekend with her second Saratoga starter. On Saturday, Change of Control (Fed Biz) will race from post one in the Smart N Fancy S. The 6-year-old mare finished fourth by three lengths to eventual GI Fourstardave H. winner Casa Creed (Jimmy Creed) in the GI Jaipur S. and followed that effort with a stakes win at Colonial Downs on July 18.

“She's coming into this race really well off her win at Colonial,” Lovell reported. “It was nice to get a little class relief there and that will set her up well for this race. There are some good mares in there, so there's no doubt it will be a nice race. Hopefully we get a nice trip.”

It certainly can't hurt that while in Saratoga, Change of Control is staying in the same stall that Damon's Mound occupied last weekend.

“It would be awesome to be two-for-two up here,” Lovell said. “That would be the cherry on top.”