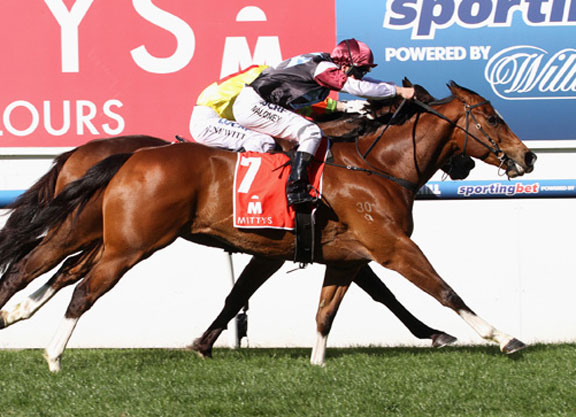 Angelic Light (Aus) (Holy Roman Emperor {Ire}), a former high-class racemare has died of complications related to a bout of colic at Widden Stud in Australia. The 7-year-old mare who had produced a colt foal by Sebring (Aus) (More Than Ready) earlier this year, was a Group 1 performer when trained by Robbie Griffiths. She beat Lankan Rupee (Aus) (Redoutes’s Choice {Aus}) in the G2 McEwan S. at Moonee Valley in September 2014 before being narrowly denied by the same rival in the G1 Manikato S. a month later. She also reached the frame in the G1 Moir S. when finishing third to Buffering (Aus) (Mossman {Aus}) in the race in 2015 on what was to be her final start.

“She was a young mare that had only recently had her first foal,” Griffiths told Racing And Sports. “There was a lot of upside to her hopefully reproducing off the track what she did on the track and it’s all come to a sudden tragic end.”