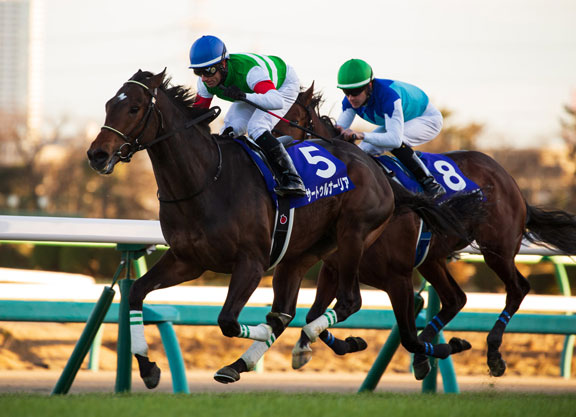 If Christophe Lemaire was the human star of the final day of racing on the JRA circuit, Carrot Farm's Saturnalia (Jpn) (Lord Kanaloa {Jpn}) was his equine counterpart, as the impeccably bred colt ran his record to a perfect three-from-three and quite probably locked up the juvenile championship with a soft victory in the G1 Hopeful S.

First to break the line beneath second-leading rider Mirco Demuro, the odds-on pop led by the stands for the first time, but was overtaken by 40-1 Cosmo Calendula (Jpn) (Novellist {Ire}) at the first corner and was only too happy to take the sit from just off the leader into the back straight. Into the box seat when the Lemaire-ridden second favorite Admire Justa (Jpn) (Just a Way {Jpn}) rolled up approaching the entrance to the far turn, Saturnalia still traveled comfortably on the back of the pacesetter, but there were some nervous moments entering the final 350m when short of racing room. But Demuro never panicked aboard the favourite and the duo finally bulled their way between Admire Juste and Breaking Dawn (Jpn) (Victoire Pisa {Jpn}) at the furlong grounds before going on to a relatively easy success. Nishino Daisy (Jpn) (Harbinger {GB}) closed well for third.

“I knew I was riding the strongest 2-year-old of the season, but it was his first time over 2000 metres, so I was a little worried,” Demuro admitted. “He really showed his strength though, squeezing his way through the narrow opening. I am really looking forward to his 3-year-old season.”

Saturnalia is one of a remarkable 140 winners from the first two crops of his impressive young sire and joins Mile Championship hero Stelvio (Jpn) and Japan Cup victrix Almond Eye (Jpn) as top-level winners in just the last month. He becomes the sixth GSW for Lord Kanaloa. Saturnalia's champion dam was a star in her own right, winning five of six in the Carrot Farm green and white, including the 2005 Yushun Himba (Japanese Oaks) before annexing that year's GI American Oaks at Hollywood Park by a resounding four lengths in stakes-record time (video).

WATCH: Saturnalia far too classy in the Hopeful S.