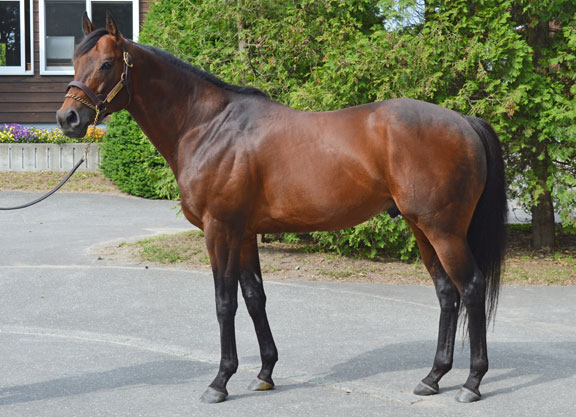 Throughout a distinguished career, Arrowfield Stud's John Messara has gotten it right a whole lot more than not.

Given the faith he has shown in the Japanese Thoroughbred, it is not the least bit surprising that Messara has also supported Japanese-based stallions with his own mares and foaling them once returned to Australia. The always-formidable Arrowfield consignment at this week's Magic Millions Gold Coast Yearling Sale includes a pair of fillies from the third crop of Horse of the Year Lord Kanaloa (Jpn) (King Kamehameha {Jpn}), whose stud career is off to a most promising start.

A good many judges anticipated that the now 10-year-old stallion would be among the leading first-crop sires in Japan in 2017, and he did not disappoint. According to statistics from Japanese Bloodstock Information System (JBIS), Lord Kanaloa topped the freshman standings with 32 winners, some 12 clear of Orfevre (Jpn) (Stay Gold {Jpn}), good for progeny earnings in excess of ¥435 million. Those results were strong enough to make Lord Kanaloa the second-leading sire of 2-year-olds among the general sire population, with only Deep Impact's remarkable 50 juvenile winners and progeny earnings of ¥728 million proving superior. While he has yet to sire a black-type winner from his initial runners, his son Stelvio (Jpn) (–L'Archetto {Jpn}, by Falbrav {Ire}) was second to likely champion Danon Premium (Jpn) (Deep Impact {Jpn}) in the G3 Saudi Arabia Royal Cup and G1 Asahi Hai Futurity. (Ed's Note: Lord Kanaloa gained his first black-type winner when 3-year-old filly Almond Eye (Jpn) (–Fusaichi Pandora {Jpn}, by Sunday Silence) beat the boys as the 19-10 favourite in the G3 Nikkan Sports Sho Shinzan Kinen at Kyoto Jan. 8).

You can count Messara amongst the sire's fans.

“Anyone in Australia who saw Lord Kanaloa win the [G1 Longines Hong Kong] Sprint [twice] over there were very impressed,” Messara said. “He's offering a little bit of precocity, which is also useful in Australia. He's of the sprinting mold, he offers precocity, he's a good physical. He's got a lot of things that are going to be suitable down here. We were taken with him from the start and lucky enough now just to get some mares in foal to him, so we have some to offer here at the sales.”

Messara believes a selling point is the lack of Sunday Silence in Lord Kanaloa's pedigree and expects his offspring to be popular.

“There's always a bit of reticence in the market, here as much as Northern Hemisphere markets. It's just a lack of intimacy with the breed,” he said. “I think they will think he's a different candidate to be an absolutely top stallion and he's started off in the right way. He's from a sire line that we understand here. Overall, I can't see that they won't find him attractive. He's left some attractive types.

He continued, “His service fee has gone up to the equivalent of A$94,000 this year, which is a pretty significant fee. It'll be a fee in the range of some of the top proven stallions in Australia. Snitzel stands for A$160,000, so this guy isn't far behind. People love discovering these things at sales, you have to let them discover it themselves, which they will. Most of the international buyers that are here are fully aware of what's going on in Japan and the Australians, too, are beginning to look closely at Japan. Because, in our region and all over the world, when [Japanese horses] travel to race in other countries, they perform pretty credibly and they've got a very good record. We know that they are world competitors and this is one of their leading stallions there now.” 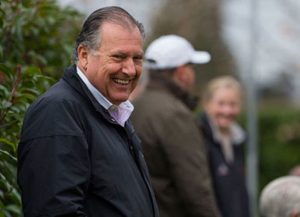 In addition to the success of his progeny at the races in 2017, Lord Kanaloa has also proved a commercial hit at Japanese bloodstock sales. While his first-crop foals fetched as much as ¥71 million, the stallion was represented by his first 'nine-figure' sales in 2017 topped by a yearling son of G1 New Zealand 1000 Guineas winner King's Rose (NZ) (Redoute's Choice {Aus}) and a colt foal from G1 Australian Guineas and G1 ATC Derby winner Shamrocker (NZ) (O'Reilly {NZ}), each of which sold for ¥194 million (about A$2 million) at the JRHA Select Sales last July.

Messara said that while the Lord Kanaloas are 'typey' sorts, his experience tells him there isn't a whole lot to be read into that at the end of the day.

“Snitzel doesn't throw anything that is typical of him, they come in every shape and size and they run like hell,” he commented. “After what I've experienced with Snitzel, I realized that, while it gives you comfort to see something that is typical of the sire, it doesn't really necessarily go on to success and the alternative sometimes works just as well, if not better. I remember my manager at the time, when Snitzel had his first crop, ringing me and saying, 'Hey boss, they're in all shapes and colours here, I think we're in trouble.' And I said, 'Why don't we just wait, until we see how they run before we decide if we're in trouble.' Now, we have Snitzel on our hands. That's a story that's worth remembering.”

The Arrowfield consignment aside, Messara is bullish on the prospects for the Gold Coast sale, given the 2017 results from auctions in the Northern Hemisphere and given the current strength of the racing product in Australia.

“Australia is in a particularly good situation in terms of stake money,” he said. “Our returns to owners are about the best in the world other than Japan and Hong Kong. Our returns are far better than the States and in Europe–returns to owners that is– prizemoney to cost of racing. There's a lot of good reasons to be racing horses in Australia. So there is a good fundamental support there for a good market for those yearlings. I'm expecting the market to be around last year's, I'm hoping. I don't know if there is going to be any growth in it, but the sale should be around last year's, even with what's happened all around the world. We do get a good contingent of investors. I think that's what everyone's expecting.”

“He did very well,” Messara said. “He got 120-130 mares. Nice mares, we supported him strongly as well. He's a lovely physical. His pedigree is a little obscure, but he was such a dominating racehorse. He exudes sex appeal, frankly, when you look at him, and that took a good lot of people in. People were really impressed by his appearance, his athleticism, his sheer power. And again, had he only ever raced in Japan and not raced in Hong Kong, the Australians may not have seen just how good he was, but he won three Group 1s in Japan and the same [in HK] and you couldn't miss just his dominance.”

Following a 2017 Gold Coast sale in which they sold 48 of their 53 yearlings offered and finished as the sale's leading vendor for the premier level and for Books 1 and 2 overall, Arrowfield will look to display their dominance once again this week at Magic Millions.