Lopez After Fight With Ortiz: 'I Don't Want Any Trouble Going Forward' 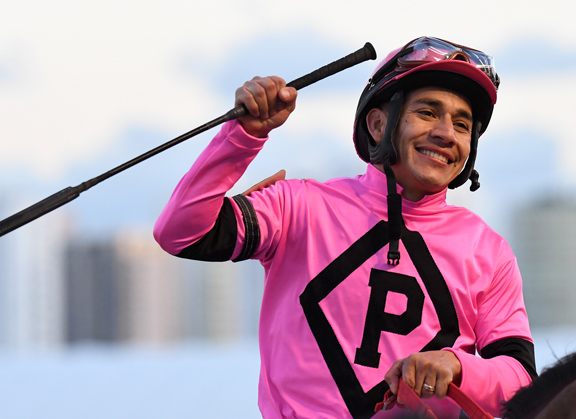 After scuffling Friday at Gulfstream Park with Irad Ortiz, Jr., which caused him to be put on probation for the remainder of the meet, Paco Lopez told the TDN Monday he is ready to move on.

That there was a fight between Ortiz and Lopez was first reported by the Daily Racing Form's Mike Welsch. The fight was captured on a video that shows Ortiz landing at least three punches on Lopez following the fourth race Friday at Gulfstream. Lopez did not fight back.

“For me, it's over. I don't want any trouble going forward,” Lopez said.

Ortiz was fined $1,000 and both riders were put on probation. According to the Racing Form, probation means that any future altercation between the two riders would result in “fines and/or suspension and possible expulsion from the grounds.”

The TDN tried to reach Ortiz through his agent Steve Rushing but Rushing did not return a phone call.

Coming out of the far turn, Known Agenda came over a path and appeared to bother Top Gun Tommy before pulling away from his rival. Lopez lodged an objection but the stewards let the result stand as is.

“If I had fought him back, I'd have a fine, too,” Lopez said. “But I was just sitting down in the chair, waiting for the result at the same time as him. I didn't want to provoke him.”

“The stewards there are very tough on me,” he said. “They had given me 30 and then 60 days. I know that if I had done to him what he did to me I would have been ruled off from the track.”

Lopez said he doesn't know why Ortiz was so mad at him.

“I was just doing my job,” Lopez said. “I called the stewards. He started screaming at me. I'm not jealous of him. I had a problem. He would have done the same thing.”

Ortiz is the leading rider at the meet with 107 wins. Lopez is in a tie for third with Tyler Gaffalione. Both have 71 winners.