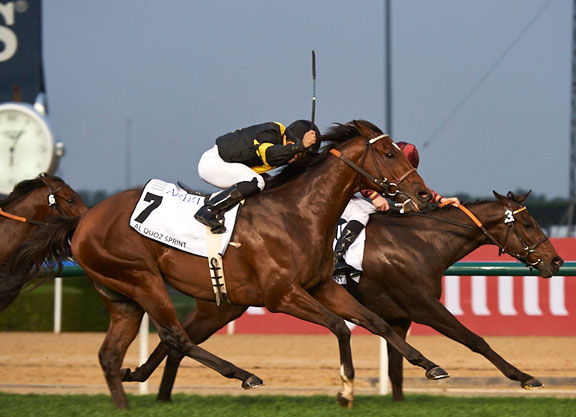 He entered Saturday’s G1 Al Quoz Sprint with victories in half of his 16 career trips to the post, but Pegase Bloodstock’s The Right Man (GB) (Lope de Vega {Ire}) was nevertheless only a rough chance, and deservedly so. But the bay, perhaps most suited in the field by the rains that pelted the region in the 24 hours leading up to the World Cup program, dug in late to hold off American raider Long On Value (Value Plus) to record the upset. Ertijaal (Ire) (Oasis Dream {GB}), conversely one of the horses most inconvenienced by the ease in the ground, finished a brave third.

No horse had ever won the Al Quoz from a draw lower than six, so on paper, The Right Man’s berth in gate three was also going to do him no favours, but he jumped well and put himself right into the early mix before easing back for some cover on the back of Ertijaal for the opening 400 metres or so. The latter, looking to improve for his runner-up effort to Buffering (Aus) (Mossman {Aus}) in last year’s renewal, hit the front going apparently well as they hit the course proper, but he came under left-handed urging from Jim Crowley as Richard’s Boy (Idiot Proof) three off the fence and The Right Man joined in nearing the furlong marker. Edging to a narrow advantage from between rivals with about a sixteenth of a mile to travel, The Right Man began reaching for the wire and managed to drop his head first as Long On Value came with a sustained rally from the tail of the field.

“I was always confident,” winning jockey Francois-Xavier Bertrand said. “I got a good position [behind Ertijaal] and my horse was very brave right to the end. You live your life for moments like this.”

The victory was also the first at the top level for trainer Didier Guillemin, who added: “I was very emotional because it was an honour to be invited. To have such a finish and win it is absolutely amazing. We’re very proud of the horse. When he finished third here, we were very happy with that result and even happier that he’s won here tonight. Twenty years ago I would have never thought we would come here and win a Group 1. It’s absolutely majestic. I would like to thank the organisers. It’s fabulous what they do here.”

Consistent in the lower grades and in the French provinces in the beginning part of his career, The Right Man was Group 3-placed at the tail end of 2015 and picked up a maiden black-type success in the Listed Prix de Bonneval at Maisons-Laffitte last October. The bay validated 27-10 favoritism in adding the G3 Prix de Seine-Et-Oise at the latter venue the following month and had one run under his belt this term, a solid third behind Jungle Cat (Ire) (Iffraaj {GB}) in the Nad Al Sheba Turf Sprint on Mar. 4.

A half-brother to the stakes-placed Three Moons (Ire) (Montjeu {Ire}), dam of SW & GSP Tashaar (Ire) (Sea the Stars {Ire}), The Right Man is out of a winning half-sister to SW & MGSP Thames (Fr) (Fabulous Dancer) and SW Three Wrens (Ire) (Second Empire {Ire}). Third dam Three Troikas (Fr) (Lyphard) was France’s Horse of the Year for 1979, with wins in the G1 Poule d’Essai des Pouliches, G1 Prix Saint-Alary and the G1 Prix de l’Arc de Triomphe. She was also named champion older mare in France in 1980. The Right Man, an €32,000 purchase out of the 2013 Arqana August Yearling Sales, was entered for, but bought back out of the 2015 Arqana Summer Horses in Training Sale when bidding stalled out at €80,000. Three Owls is the dam of the 2-year-old filly Oykel (Fr) (Kendargent {Fr}).